Dewan Housing Will Be Test Case For "Haircut Salon" Approach

Nearly nine-tenths of DHFL's Rs 84,000 crore($12 billion) in borrowing is secured against assets.

India is trying something new. After watching the shadow banking industry collapse in slow motion for more than a year, authorities have decided that enough is enough. They want to experiment with in-court bankruptcy for nonbank lenders. But will going to a haircut salon leave the financial system any neater?

Dewan Housing Finance will be the test case of this new approach. The central bank booted out the mortgage financier's board on Wednesday and appointed an administrator who will be tasked with resolution once bankruptcy tribunal takes Dewan under its wing.

As I wrote earlier, for the lenders to pretend that they were going to restructure Dewan's $12 billion in liabilities outside of court supervision was just a Bollywood fantasy.

The problem is that India's 2016 insolvency law, modeled on the UK system, is set up for non-financial firms. Using the same law to put a financier like Dewan out of its misery has some advantages but many shortcomings.

Take the asset side of the business first. In bankruptcy, Dewan's mortgage portfolio should be easy enough to hawk to a buyer, though its lumpy loans to struggling developers may prove a harder sell, requiring creditors to accept deep losses or haircuts.

The liability side is also fairly uncomplicated. Dewan does have fixed deposits from moms and pops. But unlike bank deposits, those aren't insured. Nor is Dewan an insurance company, saddled with policyholder claims that overhang the future. To that extent, it should be possible to use the existing law to solve the problem of aligning the interests of banks and bondholders, which has been the single biggest obstacle to restructuring.

Still, there are complications. Nearly nine-tenths of Dewan's Rs 84,000 crore ($12 billion) in borrowing is secured against assets. But secured bondholders, including mutual funds, are unsure if Dewan has double-dipped into what was promised to them as security. Untangling this legal confusion around ownership, at a time when India's finance industry is witnessing a free-for-all collateral grab, won't be easy. 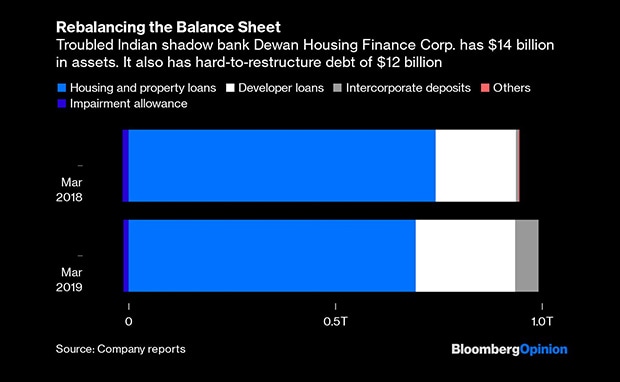 The rules that the government has come up with in the absence of a tailor-made bankruptcy law for financial firms are untested. They call for some involvement on the part of the regulators, including a "no objection" to a resolution plan approved by a creditors' committee. The last time the Reserve Bank of India involved itself too closely with the bankruptcy law, it was whacked by India's top court for swimming outside its lane. So it must proceed cautiously. For instance, if the bank tries to influence how any sale proceeds are to be distributed to help out, say, uninsured retail depositors in the larger public interest, there could be a problem.

Another potential minefield is suspicion of fraud. Audit firm KPMG has found that $2 billion was lent to 25 borrowers with little real business or assets, and that "such entities may be working closely" with Dewan.  The previous management, now stripped of control, is being investigated by officials in connection with a loan to a late Dubai-based gangster's real-estate firm. The risk that government agencies may attach the assets of a debtor company even as its ownership is changing hands became very real in the case of Bhushan Power & Steel Ltd. Its exit from bankruptcy is currently stalled for that very reason.

The crumbling of of infrastructure financier IL&FS Group in September 2018 caught India by surprise. At the time, the RBI wasn't empowered to supersede the board of a nonbank financier. So the government did the firing and appointed a new team to sell assets and recoup money for creditors. With that show taking a long time to hit the road, New Delhi wants to do things more formally this time.

The impatience is understandable, though it's not clear if the bankruptcy code's timelines are suitable for Dewan, which has been defaulting on debt payments since June. The way things are set up, a tribunal-appointed resolution professional keeps the business going. A committee of creditors tries to extract value by selling the firm or liquidating its assets. The process, originally meant to be concluded in 270 days, can in practice stretch to more than 600. That's acceptable when fixed assets, such as a steel plant, can be kept busy with a bit of working capital.

However, a financial firm's raw material is trust. Just because Dewan will continue to have a valid license doesn't mean the market will be confident providing new money. A quick liquidation would save the enterprise value from going to zero. Whether an overworked Indian bankruptcy salon can deliver the equivalent of a 10-minute trim is the biggest question.