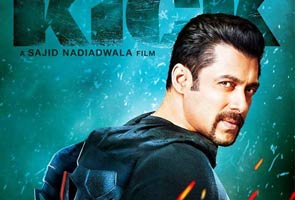 Salman Khan-starrer Kick continued to take its box-office tally higher, by adding over Rs 35 lakh on Monday, according to estimates of Bollywood website Koimoi.com. This takes Kick's total domestic collection to Rs 231.15 crore, says the website.

Kick, now into its fourth week, is expected to do a lifetime domestic business of around Rs 235 crore, says Koimoi.com.

Promoted
Listen to the latest songs, only on JioSaavn.com
Kick, released ahead of Eid, hit the Rs.100 crore mark on the fifth day after its release. Salman Khan's earlier Eid releases like Wanted and Ek Tha Tiger turned out to be super hits. Also, starring Randeep Hooda, Nawazuddin Siddiqui and Jacqueline Fernandez, Kick hit over 5,000 screens in India on July 25 as well as 42 other countries.

With Kick, director Sajid Nadiadwala has also moved into record books. He has become the first director whose debut movie has grossed over Rs 200 crore.