Why Is The Stock Market Falling?

The recent decline in the market has worried investors. What are the reasons behind this correction? Find out...

Whenever the bulls take the market up, the bears bring it back down again.

Another day, another fall in the stock market.

These sharp declines are becoming routine. Traders and investors don't find it surprising when the Nifty is down 200 points intraday.

This is in stark contrast to the situation in the market last year. In October 2021, the Nifty had gone up all the way to about 18,500.

It hasn't crossed that mark since. Instead, the best word to describe the market would be 'volatile.'

Whenever the bulls take the market up, the bears bring it back down again. This is how the market has been moving over the last seven months.

But the bulls had become used to the market going up ever since it bottomed out in March 2020.

Now the bears are in control. In market speak, we say there has been a change in sentiment. Some are even talking about a full-fledged bear market.

Why has this happened?

Let's look at the reasons one at a time.

When Covid hit, every government in the world turned on the money tap. They spent heavily to stimulate their economies during the lockdowns.

Central banks flooded the world with newly printed money. There was so much money sloshing around, it was inevitable that a lot of it would flow into the stock market.

But now things are different.

Governments are winding up their covid economic support programs. Central banks have stopped printing money. In fact, the US Fed will soon reverse the process by withdrawing the funds it pumped in.

Interest rates have started rising around the world. Today the Reserve Bank of India raised its repo rate by 0.4% and CRR by 0.5%.

The market was down in anticipation even before the announcement and crashed after it. But the reason for the crash is much deeper than a rate hike.

The most important interest rate in the world is that of the 10-year US government bond. The yield on this bond is the global benchmark for long-term interest rates.

This is important because it's a risk-free, long-term investment. If investors can get a good yield, then they would have less incentive to invest in risky assets like stocks.

Also, analysts use this interest rate the 'discount rate' to value stocks when they make buy/sell recommendations.

As this rate goes up, the value of stocks goes down. This leads to more selling in the market. The 10-year US bond yield has risen from 0.5% in August 2020 to about 3% now. It was only a matter of time before it impacted the stock market.

Foreign Institutional Investors (FII) are among the big movers and shakers of the market.

Before the rise of the Indian retail investor and Indian mutual funds, FIIs were the only big boys in the Indian stock market.

Even today, they are still a powerful force. But the crucial point here is the declining trend in their holdings of Indian stocks.

Did you know FIIs have sold shares worth over $20 billion since April 2021?

They have been selling Indian shares for many months now. So much so that their holding in NSE 500 companies dropped to a 3-year low in March 2022.

Since April 2021, FIIs have been sellers in every month except three and they have sold Indian shares worth over $20 billion. 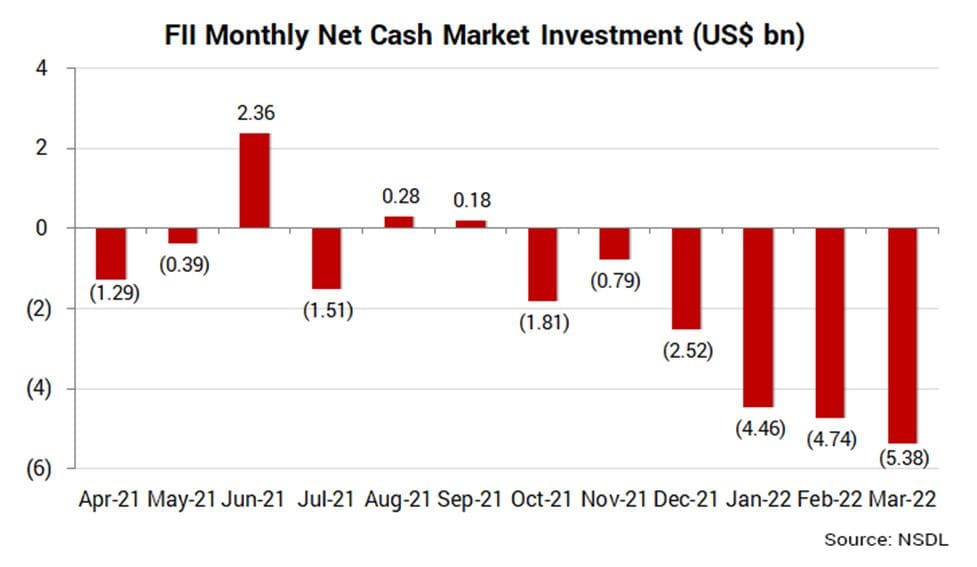 Retail investors made up for this selling with their enthusiastic buying. But the selling by FIIs meant that retail investors were the only large buyers in the market.

In other words, if retail investors stop/reduce their buying activity, the market will be for a very tough time.

This risk is regularly ignored by investors, especially in a bull market. But it's one of the most important risks global finance.

The markets don't like uncertainty and changes in geopolitics always causes uncertainty.

The Russia-Ukraine war is just the latest example.

It has caused disruption in commodity markets, especially crude oil, and certain metals. The sanctions imposed on Russia will also have consequences around the world.

No one knows how the situation will play out. There seems to be no light at the end of the tunnel as far as a resolution in concerned.

If anything, the war is escalating. Both the west and Russia have made dangerous threats against each other, including the use of nuclear weapons.

This has made global markets nervous.

The worry in the market is that retail investors, who are driving the market, may choose to cut back on spending. This could 'spending' on the stock market.
They could also withdraw their funds if they face losses.

When inflation is high, no one wants to hold on to a stock that is not rising or worse, falling.

This leads to more selling.

During covid, many companies tightened their belts. They reduced their costs and went digital. The work from home culture gave a big boost to that trend.

This actually made many companies more profitable, especially when the lockdowns were lifted.

Analysts then extrapolated these profits and assumed the good times would continue. All kinds of 'stories' were floated to keep the momentum going.

But inflation has put an end to those expectations. Raw material costs, employee costs, transportation costs, everything is going up. This has put a cap on rising profits.

Analysts are now no longer able to justify high stock prices. Thus, they have begun to reduce their earnings expectations.

Then there is simple reason of selling because everyone is doing it.

It takes a lot of emotional strength to hold on to your conviction when the market goes against you.

Most people succumb to fear and sell their stocks even if they planned to hold on to them.

Think of it as FOMO in reverse. The Fear of Missing Out (FOMO) drove many new investors to the market during the lockdown.

As long as the market was going up, they were happy. But now fear is working in the opposite direction.

If the market were to keep falling, many investors will likely throw in the towel. They will sell just because everyone else is selling.

These are the main reasons behind the falling stock market.

Individuals will have their personal reasons too. All these reasons combined have put a lot of pressure on the bulls.

Those who have cash on hand will find attractive buying opportunities in select stocks.

For those who are still holding on, check your portfolio for stocks with poor fundamentals. It makes sense to exit them, even at a loss, and put those funds to work in high quality stocks.

Finally, this is not a time for exuberance. Don't invest aggressively in this market. Take the time to do your due diligence on the stocks you want to buy before investing.