The Only Theme I'm Willing To Bet On For Multibagger Gains ...

Indian economy is in a nascent stage of a capex revival. The last time this happened, the stock markets saw a multi-year bull run.

The government has hiked its capex target by 35% to Rs 7.5 lakh crore.

A few months ago, my friend bought a flat in a posh Mumbai locality.

After the pandemic, he and his wife have been working from home. While he had always wanted to own a house, it was this phase that triggered a slow burning desire into almost an obsession.

This was a big-ticket purchase. And not the end of the story. For the next few weeks, almost a month, along with a substantial budget, were dedicated to outsourcing interior design work, including furniture, plumbing, and paints.

He ended up buying things that were really not required - a new refrigerator and washing machine. The perfectly functional old ones were discarded on OLX.

This was easily 8% of his investment in the property.

Now this may not seem much in percentage terms. But considering the kind of investment that goes in a property, it's a significant amount.

Every time a house is bought, it triggers spending in other categories as well, towards most things that go into the house. No wonder that housing sales are considered a leading indicator for an economy.

Now this was not a standalone example. Despite an increase in lending rates, bookings and residential prices are firming up.

While global events such as Russia Ukraine war, FIIs exit and the US Fed increasing interest rates are hogging all the limelight, more relevant factors indicate the prospects of economy in coming years are being ignored.

Another case in point is the deleveraging of corporate balance sheets and the uptick in the capex activity.

The government has hiked its capex target by 35% to Rs 7.5 lakh crore. There is a strong chance it will bring in private capex, triggering a virtuous cycle.

Short term pressures on profits remain due to supply chain issues and inflation. But corporates have more confident over the last few years about the long term demand. They are putting up capex to cater to it. This is supported by healthier balance sheets of banks, higher capacity utilisation, and healthy cash flows.

An enabling environment with strong government intention to revive infrastructure and make the country self-reliant is another positive.
Schemes like PLI have been set in motion.

The boost from this capex revival will not just be limited to infra and capital goods sector in my view.

As I shared in the example in the beginning, there will be positive ripple effects across many sectors.

So what could a capex revival mean for the stock market?

Let's look at the history for some answers.

India witnessed one of its strongest capex cycles in 2003-2007. And this is how the market rallied. 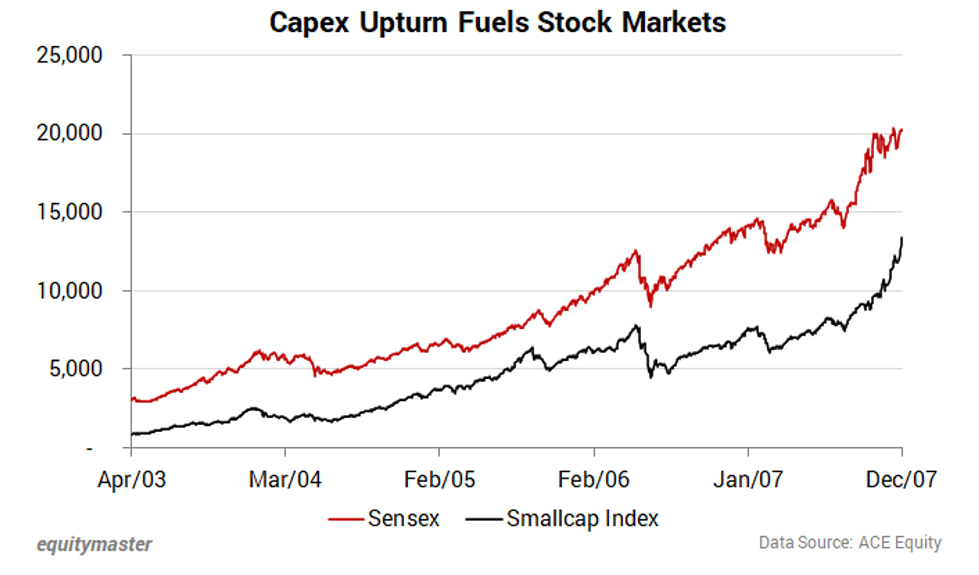 Those who capitalised on this opportunity potentially made some of the biggest gains in a decade.

Now this is not as simple as it sounds.

Consider the case of paints sector.

A few weeks ago, Grasim announced an aggressive capex plan in the paints sector. It increased planned capex from Rs 5,000 crore to Rs 10,000 crore. The capacity it's aiming for is 1.33 billion litres. This is very close to market leader Asian Paints.

It's not hard to imagine what this might do to existing players. Increased supplies are likely to increase competition and pricing pressure.

No wonder then major incumbents, including behemoths like Asian Paints and Berger Paints, witnessed a sharp sell off.

This is going to be a common issue in some other sectors as well.

So the huge capex planned in a particular sector could turn out either way for the stocks in the sector. It will depend on the supply demand dynamics.

So how can you be on the right side of the capex bet?

Well, I would look for companies that are suppliers to the entire industry and not to one specific company in the sector.

For instance, in the above case, there is a smallcap company that is critical supplier to paint companies, including, but not limited to Asian Paints.

What makes it an even a more hedged bet is that the company is not focused on one particular sector. It's a supplier to food and FMCG and pharma companies as well. And is likely to benefit from capex expansion of clients in these sectors too.

Another factor I'll be looking for would be quality of the balance sheet. Also important is the track record of the promoters. Have they executed projects in the past? How good are their capital allocation skills.

For instance, one of my high conviction smallcap recommendations is a beneficiary of infrastructure boom, rising housing demand, construction, the upturn in the capex cycle, and increasing government focus on water supply.

I would not have given weightage to these tailwinds had it not been for the pristine balance sheet of the company, and the fact that most of its ongoing capex plan is self-funded.

While the capex cycle of 2003-2007 catapulted many smallcaps to midcaps, a blind participation in the thematic plays led investors to bet on stocks like Suzlon Energy and Unitech.

As you prepare to benefit from probably one of the biggest themes of the decade, do not take your eyes off from fundamentally strong stocks and the margin of safety in valuations.