With inflation already at 13-month low and oil prices sliding, calls for the Reserve Bank of India to stay on hold on Wednesday are getting stronger. 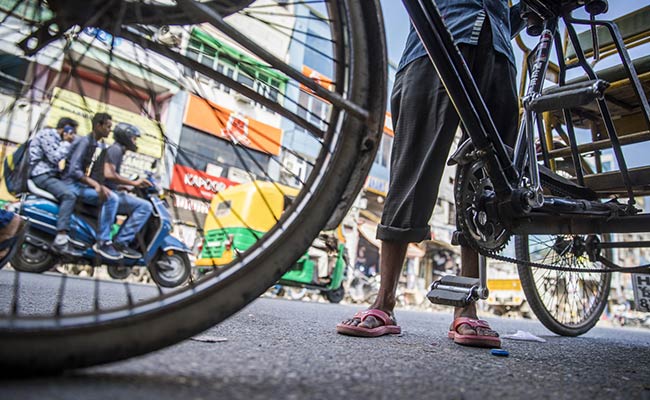 The economy grew at a much slower pace than economists expected last quarter, giving the central bank more reason to keep interest rates unchanged this week. After breaking through the 8 per cent mark in the quarter through June, growth eased to 7.1 per cent in the three months through September -- lower than almost all the estimates in a Bloomberg survey -- as back-to-back rate hikes in June and August, a funding squeeze and subdued growth in farming put a brake on the world's fastest-expanding economy.

With inflation already at a 13-month low and oil prices sliding, calls for the Reserve Bank of India to stay on hold on Wednesday -- as most economists expect -- are getting stronger. The RBI kept its benchmark rate unchanged at 6.5 per cent in October, lowering its growth forecast for the first quarter of the 2020 fiscal year to 7.4 per cent.

"We continue to forecast that India's growth will slow down in 2019," said Priyanka Kishore, an economist at Oxford Economics in Singapore. "And with cost pressures easing, we now expect the RBI to pause policy for an extended period." 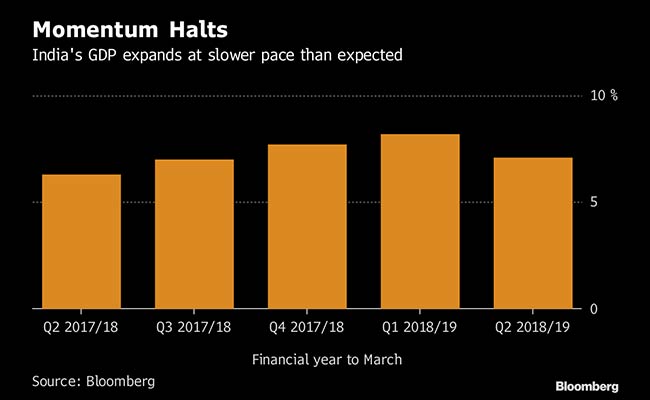 Agriculture growth eased to 3.8 per cent in the quarter,  manufacturing slowed to 7.4 per cent, and private consumption growth weakened to 7 per cent, while government spending gained 12.7 per cent.

Like elsewhere in Asia, growth in India is coming off the boil amid waning global demand wanes and trade tensions. While the 7 per cent-plus expansion still makes the country a growth star, the more subdued outlook brings uncertainty to fiscal and monetary policy.

Budget goals may come under pressure if slower growth prompts Prime Minister Narendra Modi's administration to boost spending before elections next year. It may also increase tension between the Reserve Bank of India and the government, which is trying to get Governor Urjit Patel and his team to do more to ease the credit crunch.

"Based on the September quarter GDP growth and likelihood of lower growth in the second half of the year, chances of fiscal slippage are very high," said Devendra Kumar Pant, chief economist with India Ratings & Research, the local unit of Fitch Ratings. "The central bank is expected to stay on hold," he said.

What Our Economists Say....
Inflation has already slowed sharply and the recent tumble in oil prices points to a further downtrend. The added disinflationary force from a widening output gap is likely to act as the final straw for a change in RBI's policy stance. We expect the central bank to hold rates at its December 5 review and revert back to neutral from its stance of calibrated tightening. --  Abhishek Gupta, Bloomberg Economics. 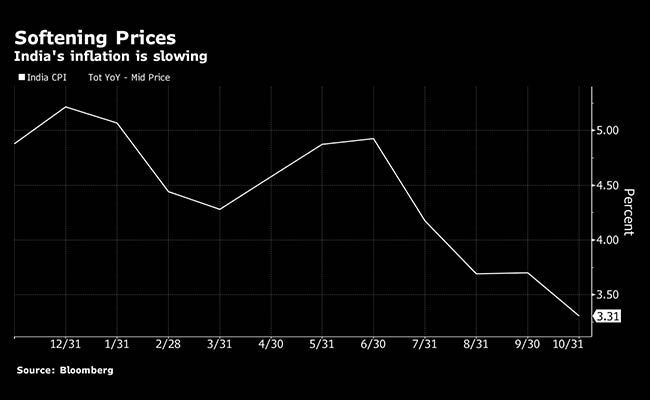 A slew of high-frequency data between July and September, as well as Bloomberg News' indicator of animal spirits, already pointed to subdued demand in the quarter. Growth in industrial production eased in each of the three months amid a surge in fuel costs, while automobile sales moderated in the period.

Sectors like retail and real estate have been hit after debt defaults by a troubled financier forced many shadow banks to curtail lending when their own borrowing costs surged.