Cryptocurrency traders call it the "sandwich" maneuver, and nobody wants to be the turkey caught in the middle. 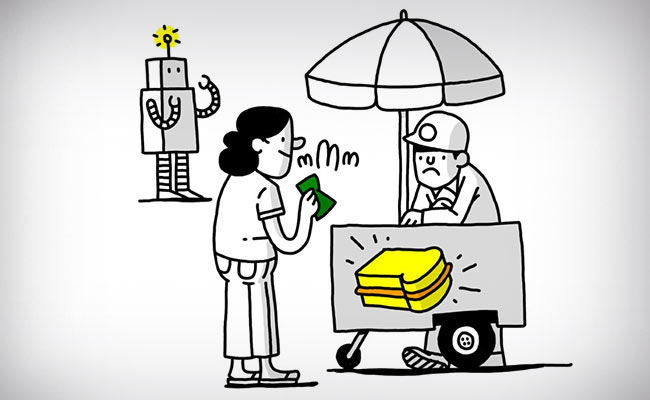 The people behind Flashbots say theyre trying to solve a serious problem.

Cryptocurrency traders call it the “sandwich” maneuver, and nobody wants to be the turkey caught in the middle. Here's how it works: You spot another trader on the network trying to buy a token, such as Ether or another so-called altcoin. Then you place an order, too. If you are able to get your purchase done before the other trader, you'll get a good deal on a coin you know there's demand for. Your purchase pushes up the price the other buyer has to pay. Completing the sandwich, you sell for an easy profit.

This sort of front-running has long been a problem for people trading crypto. It happens on decentralized exchanges that run on a technology called Ethereum, because transactions are visible for a time before they are completed. Computer programs called bots scour the network for such opportunities, and the practice has exploded recently, thanks to the release of a free, open source tool called Flashbots.

Before Flashbots, “there was a high chance that front-running would not happen to you,” says Anton Bukov, co-founder of 1inch, a crypto-exchange aggregator. “Since it was released, a lot of people got access to this, and they started to front-run all these traders.” That's opened up a debate in the crypto community that's familiar to anyone who followed arguments about high-frequency traders in equities: Are computerized traders just taking money out of other people's pockets? Or could they instead be helping the crypto market work better?

The people behind Flashbots say they're trying to solve a serious problem. Similar to Bitcoin, Ethereum runs on a blockchain, a public digital ledger maintained by computers connected to the internet. Users known as miners earn cryptocurrency by processing transactions on this ledger. Transactions aren't instantaneous—instead, they get pooled and then processed by miners in chunks called blocks. Miners have the power to decide which transactions in a block go first. So they can potentially make front-running trades themselves, or they can sell the chance to someone else, by giving priority to orders that promise a higher transaction fee. “We haven't even scratched the surface of shenanigans miners could be up to,” says Nic Carter, co-founder of researcher Coin Metrics.

Flashbots doesn't eliminate the shenanigans, but it tries to make them “democratic, distributed, and transparent,” in the words of Phil Daian, a Ph.D. student at Cornell Tech who's one of the tool's creators. He's also the co-author of an influential paper that brought wide attention to the problem of crypto front-running and miners' incentives to allow it. It was titled “Flash Boys 2.0,” in a nod to the Michael Lewis bestseller about high-frequency stock traders who many complained used front-running tactics.

Flashbots essentially makes a market out of cutting in line. Its auction feature lets anyone bid on a position in the queue, and miners pocket a fee from the winner. Bringing this activity out in the open and making it more orderly, the system's creators say, can reduce strain on the Ethereum network and eliminate miners' incentive to try dodgier tactics. Flashbots can also be used to prevent getting front-run: Traders using 1inch, for example, can use it to pay a miner to ensure their transaction gets done at the expected price.

Daian says transparent auctions also set the system apart from “the predatory, opaque manipulation that goes on in traditional financial exchanges.” The Flashbots project is backed by Paradigm, a crypto venture capital firm that's invested in Uniswap, creator of one of the most popular decentralized coin exchanges.

Tarun Chitra, who used to work in high-frequency trading before co-founding the crypto financial modeling platform Gauntlet, says Flashbots' markets are imperfect but may improve over time the way auctions for online ads did. “If the current state is the final solution, I'd say it's a net negative,” Chitra says of Flashbots. “But in the long run it's a good steppingstone.” Ethereum co-founder Vitalik Buterin has talked about incorporating some features of Flashbots into an updated version of the system and has been asking the Flashbots team for input. Most analysts believe Flashbots itself isn't going away.

Some see front-running in any form as a threat to the young but fast-growing world of decentralized finance, or DeFi. This refers to apps that allow crypto users to do everything from trading tokens to borrowing and lending them. DeFi apps have built in intricate systems to encourage users to participate. For example, to make crypto loans possible, an app needs traders who stand ready to buy tokens that are put up as collateral. If front-running bots constantly snap up those transactions, those players may just go away. “It eliminates all kinds of incentives—it breaks the whole system,” says Tal Be'ery, co-founder of ZenGo, a cryptowallet provider.

Ari Juels, a professor at Cornell Tech who's a co-author of “Flash Boys 2.0,” has compared the Flashbots auction approach to a town solving burglaries by selling the right to do it and using the revenue to fund the police. “It makes sense only as part of a false narrative that there's no other way,” he and two other academics wrote in an opinion column for the crypto news site CoinDesk. An alternative would be to create blockchain protocols that ensure transactions are ordered fairly. Juels is also chief scientist at a company that's working on ways to do that.

Crypto insiders believe there are about 1,000 bots in action on Ethereum. But likely only 10 groups of sophisticated traders make the bulk of the profits, says Nathan Worsley, who believes he's one of those traders. Worsley has an econometrics degree from the University of Queensland, worked at a small hedge fund in Hong Kong, and started two crypto exchanges before becoming what's known as a “searcher,” or bot operator. Besides front-running known trades, searchers also can make money just by finding profitable opportunities faster than others. Worsley says that for ethical reasons he doesn't front-run.

Worsley has run and created about 50 bots, often with help from other people with whom he splits profits. He currently has nine bots running, sending transactions every 10 seconds on average. “It is an industry that's fairly anonymous,” says Worsley, who's one of the only searchers to use his real name. “I have pretty close relationships with people represented by anime characters.”

Successful searchers, like high-frequency traders, work hard to reduce the time it takes for their orders to travel down the wires, so they can beat rivals to an order. Worsley pays about $20,000 or more a month to cloud services to use their servers, and he specifically looks for those in locations close to specific Ethereum miners or relays. “The rise of Flashbots created more competition. A lot more people came in,” says Worsley, noting that trading is getting less profitable. He tweaks his bots daily, looking at data from Flashbots auctions. “On some level it's a little bit like a chess game or a poker game. It's definitely not an easy thing to do.”

Twitter Users Will Soon Be Able To Pay In Bitcoin, Other Crypto Coins Via In-App Feature