It's a known fact that India's salaried class single-handedly contributes to the country's income tax base. But now a new study has found that Indians are among the most taxed in the world.

A survey by accountancy firm PricewaterhouseCoopers (PwC) has found that the take-home salary (after paying income tax rates and social security contributions) of a high earner in India is less than that of salary earners in the UK, Canada, US, China and Russia. (Read the survey here)

Individuals (42,800 to be precise), whose taxable income exceeds Rs 1 crore, have to pay a surcharge of 10 per cent from this year. That's not all. Wealthy Indians (wealth exceeding Rs 30 lakh) are also required to pay wealth tax of 1 per cent.

The skewed tax structure in India can be gauged from the fact that only 4 lakh people account for 63 per cent of tax collected in an economy with a tax-paying base of 3-4 crore people. (Read more)

The government cannot lower rates because income tax forms an important source of revenue for the government. In 2013-14, the government is likely to get Rs 2.42 lakh crore as income tax (Revised Estimates), which is 21 per cent of total tax revenue estimated for the current fiscal.

The only alternative, then, is to widen the tax net to include many more Indians. 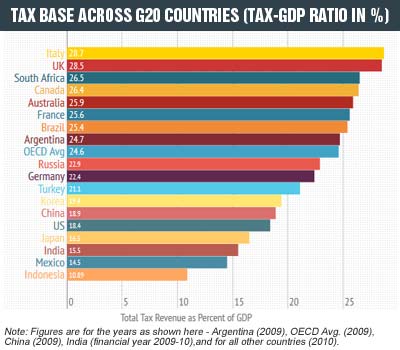 According to Centre for Budget and Governance Accountability, India's tax-GDP ratio at 17.2 per cent in 2012-13 (Budget Estimate) is way below the average tax-GDP ratio for BRICS countries at 22 per cent.

But widening tax base is easier said than done. It involves more aggressive monitoring by tax authorities (the government is already doing this) and taking some tough political decision, such as taxing agricultural income. There could also be a greater debate on abolishing the income tax as espoused by some sections of the main opposition party BJP.

Whatever be the means, rational taxes would not only lead to lower evasion, but also increased productivity.

(PwC calculated how much a high earner on a salary of $400,000 in 2013, with a mortgage of $1.2 million, would have left after all income tax rates and social security contributions. They assume this person is married with two children, one of them aged under six.)