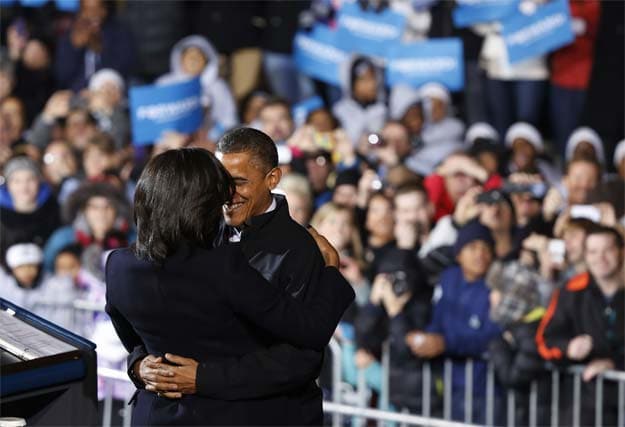 President Barack Obama laid out his second-term agenda on Wednesday, expressing a willingness to work with Republicans in Congress and a resolve to defy them if necessary.

In his first full-scale news conference since March, Obama said he was willing to compromise with Republicans to forge a deal on the nation's debt and taxes to avoid the "fiscal cliff," a combination of budget cuts and tax increases that will kick in next year if such an agreement is not reached.

But he said he would not abandon his campaign pledge to allow Bush-era tax cuts on the top 2 percent of U.S. earners to expire.

He also launched a feisty defense of his United Nations ambassador, Susan Rice, pushing back against two Republican senators who said they would not support her nomination for a Cabinet post because she made misleading statements about the September attack on the U.S. consulate in Benghazi, Libya that killed four Americans.

"If Senator (John) McCain and Senator (Lindsey) Graham and others want to go after somebody, they should go after me," Obama said.

After a re-election campaign that critics said offered few details of his vision for the next four years, Obama discussed his priorities on policies from immigration to climate change during an hour-long press conference, his first since defeating former Massachusetts governor Mitt Romney on November 6.

"I hear you have some questions for me," Obama told reporters at the White House before launching into familiar positions on raising taxes for wealthy Americans and protecting the middle class.

The president was relaxed, bantered with reporters who challenged him and expressed gratitude for having the chance to be in the White House for another four years.

"I don't have another election. And Michelle and I were talking last night about what an incredible honor and privilege it is to be put in this position," he said, referring to his wife as he noted that millions of people who voted for and against him are counting on his leadership going forward.

"I take that responsibility very seriously," he said. "And I hope and intend to be an even better president in the second term than I was in the first."

Critics of his first term say Obama did not do enough to reach out to lawmakers, particularly Republicans who still hold a majority in the House of Representatives. Obama took a conciliatory tone toward Congress while sticking to his positions on issues that divide Democrats and Republicans, including tax rates and reducing the budget deficit.

"Look, I think there's no doubt that I can always do better, and so I will examine ways that I can make sure to communicate my desire to work with everybody, so long as it's advancing the cause of strengthening our middle class and improving our economy," he said.

His conciliatory tone broke down when a questioner asked about McCain and Graham's criticism of Rice, a contender to succeed Hillary Clinton as secretary of state.

"For them to go after the U.N. ambassador, who had nothing to do with Benghazi and was simply making a presentation based on intelligence that she had received, and to besmirch her reputation is outrageous," Obama said.

If he decided Rice was the best person to succeed Clinton at the State Department, he would nominate her, Obama said, adding:

"That's not a determination that I've made yet."

The controversy over former CIA director David Petraeus' extramarital affair and subsequent resignation dominated the initial questions for the president, who said the former four-star general had an "extraordinary career" and served the United States with distinction.

On fiscal matters, Obama did not go so far as to claim a strong mandate to push through everything he wanted.

"I've got a mandate to help middle-class families and families that are working hard to try to get into the middle class," Obama said. "That's my mandate. That's what the American people said.

"I don't presume that because I won an election that everybody suddenly agrees with me on everything," he said. "I'm more than familiar with all the literature about presidential overreach in second terms. We are very cautious about that."

Obama was not cautious about putting timetables on the policy priorities he has set for his second term, however.

He said he expects to introduce a bill in Congress on comprehensive immigration reform "very soon" after his January inauguration, and he promised to engage scientists, engineers and elected officials in a conversation about reducing carbon emissions in the coming weeks and months.