Shaktikanta Das On RBI Monetary Policy Latest News Updates: The RBI sees the country's real GDP contracting by 9.5 per cent in the current fiscal year, Governor Shaktikanta Das said in a webcast after the MPC meeting.

Reserve Bank of India Governor Shaktikanta Das-led Monetary Policy Committee decided to hold key policy rates unchanged at existing levels on Friday amid high inflation. The status quo on interest rate - a second in a scheduled review - was in line with economists' expectations. The RBI said it will continue with its "accommodative" stance of policy to help pull the coronavirus-ravaged economy out of its worst slump on record. The monetary policy panel kept the repo rate - the key interest rate at which the RBI lends funds to commercial banks - at 4.0 per cent and the reverse repo rate - or the key borrowing rate - at 3.35 per cent. Three new external members in the panel voted in today's decision.

The RBI sees the country's real GDP contracting by 9.5 per cent in the current fiscal year, Mr Das said in a webcast after the MPC meeting. The economy has been the worst hit by the pandemic among major countries and new infections continue to climb, but the RBI Governor said there were some encouraging signs of a business turnaround and activity could return to growth in the January-March quarter.

Here are highlights of the RBI's latest monetary policy update:

Oct 09, 2020 13:38 (IST)
Mood Of Nation Has Shifted To Confidence, Hope: Shaktikanta Das
RBI Governor Shaktikanta Das said a renewed rise in infections remains a serious risk, but factories and cities are slowly returning to normal, and consumers turning more upbeat. The rural economy looks resilient and food grain production was set to hit new records after a good monsoon, the RBI chief said.
"In cities, traffic intensity is rising rapidly; online commerce is booming; and people are getting back to offices," he said. "The mood of the nation has shifted from fear and despair to confidence and hope." (Read His Full Statement Here)
Oct 09, 2020 13:22 (IST)
GDP Contraction Likely At 9.5% In 2020-21: RBI Governor
The country's real GDP is likely to contract  9.5% in the current fiscal year, the central bank chief said in a virtual address to the media after the scheduled meeting of the Monetary Policy Committee.
"The MPC is of the view that revival of the economy from an unprecedented COVID-19 pandemic assumes the highest priority in the conduct of monetary policy," he said.
Oct 09, 2020 13:20 (IST)
Encouraging Signs Of Business Turnaround: Shaktikanta Das
The economy has been the worst hit by the pandemic among major countries and new infections continue to climb, but RBI Governor Shaktikanta Das said there were some encouraging signs of a business turnaround and activity could return to growth in the January-March quarter.
Oct 09, 2020 10:06 (IST)
MPC Votes Unanimously To Hold Key Policy Rates
The newly-appointed Monetary Policy Committee voted unanimously to leave repo rate unchanged at 4%, said RBI Governor Shaktikanta Das in a virtual address to the media. 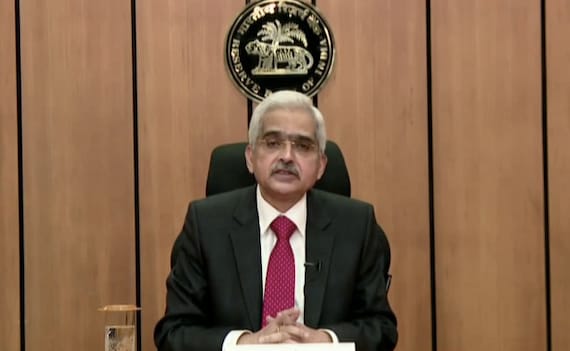 He also said the RBI will continue with its "accommodative" stance of policy "as long as necessary to revive growth on a durable basis and mitigate the impact of COVID-19" while ensuring that inflation remains within the target. The RBI chief said the current stance will continue for at least the current financial year and into the next year.
Oct 09, 2020 10:06 (IST)
RBI Holds Key Policy Rates At Existing Levels As Expected
The Reserve Bank of India's Monetary Policy Committee decided to hold key policy rates at existing levels amid high inflation. Three new external members in the panel voted in today's decision.
Oct 09, 2020 09:36 (IST)
RBI Governor Shaktikanta Das To Address Media At 10:00 AM
RBI Governor Shaktikanta Das will address the media at 10 am today.

Watch out for Bi-monthly Monetary Policy address by RBI Governor @DasShaktikanta at 10:00am on October 09, 2020 #rbitoday#rbigovernor

All eyes will be on any hints of further monetary easing in the coming months, at a time when global financial markets are divided over the prospect of further stimulus to support economies against COVID-19.
Oct 09, 2020 09:35 (IST)
Sensex, Nifty Mildly Up Before RBI Policy Decision; Financial Stocks Rise
Domestic equity markets began the day with mild gains amid buying across sectors. The S&P BSE Sensex index added more than 100 points to climb above the 40,322.14 mark, and the broader NSE Nifty 50 benchmark moved above the 11,850 level. Banking, financial services and metal stocks led gains across sectors in early trade.  (Track Markets Here)
Oct 09, 2020 09:32 (IST)
MPC's 3 New Members To Vote In Today's Decision
The RBI's Monetary Policy Committee has three new external members: Ashima Goyal, a member of PM Narendra Modi's economic advisory council, Shashanka Bhide, a senior advisor at think-tank National Council for Applied Economic Research, and Jayanth Varma, a finance and accounting professor at IIM Ahmedabad.
Oct 09, 2020 09:31 (IST)
RBI Widely Expected To Hold Policy Rates
Most economists expect the RBI to keep policy rates unchanged at existing levels, as inflation has remained above its comfort zone for five straight months, amid a jump in food prices, despite strategic removal of COVID-19-related restrictions. (Read More On What To Expect From RBI Today)
Oct 09, 2020 09:29 (IST)
MPC Decision On Rates To Be Out Soon
The RBI's Monetary Policy Committee will shortly reveal its decision at the end of a bi-monthly review that began on Wednesday. The central bank's Monetary Policy Committee - which has three new members: Ashima Goyal, Shashanka Bhide and Jayanth Varma - is widely expected to retain key policy rates at existing levels amid elevated levels of retail inflation and a record plunge in economic growth.