Petrol pumps strike in Delhi: The protest started from 6 am on Monday and remained till 5 am on Tuesday.

All petrol pumps along with linked Compressed Natural Gas (CNG) dispensing units in the national capital were shut on Monday in protest against Delhi government's refusal to reduce Value Added Tax (VAT) on fuels. The protest started from 6 am on Monday and remained till 5 am on Tuesday.  Delhi has a higher VAT than neighboring states. In comparison to Delhi, fuel rates in bordering states like Uttar Pradesh and Haryana are cheaper, the Delhi Petrol Dealers Association (DPDA) said in a statement recently.

On October 4, the Central government announced a cut of Rs. 2.50 a litre each for petrol and diesel and urged state governments to match the reduction to provide relief from high fuel prices. Maharashtra and Gujarat were among the first states to announce reductions of Rs. 2.50 per litre each. Chhattisgarh, Jharkhand, Tripura, Uttar Pradesh, Madhya Pradesh, Himachal Pradesh, Haryana, Assam, Uttarakhand, Goa, Arunachal Pradesh, and Jammu and Kashmir later announced similar moves. However, Delhi government refused to reduce VAT on both petrol and diesel, as reported by news agency Press Trust of India.

Here are the highlights on the fuel station strike in Delhi:

Oct 22, 2018 16:22 (IST)
Brent had earlier this month hit a four-year high of $86.74 a barrel.
Oct 22, 2018 15:11 (IST)
Petrol and diesel rates are decided on a daily basis by oil-marketing companies on the basis of the rupee-dollar rate and global crude oil prices. Globally, crude oil prices rose on Monday, with Brent - the international benchmark for crude oil - moving above $80 per barrel
Oct 22, 2018 15:01 (IST)
Taxes on petrol and diesel, which account for more than a third of retail fuel prices, are one of the biggest sources of income for the government.
Oct 22, 2018 14:06 (IST)
The reduction in excise duty on October 5 is the second in four years of BJP-led NDA rule. The BJP-government at the centre had raised excise duty on petrol by Rs 11.77 a litre and that on diesel by Rs 13.47 a litre in nine instalments between November 2014 and January 2016 to shore up finances as global oil prices fell, but then cut the tax once in October last year by Rs 2 a litre.
Oct 22, 2018 13:29 (IST)
As of October 15, 2018, a VAT of Rs 17.59 per litre (including dealer commission) was applicable on sale of petrol in Delhi, according to Indian Oil Corporation.
Oct 22, 2018 13:14 (IST)
The fuel rates vary from city to city and from pump to pump depending on local taxes and transportation cost.
Oct 22, 2018 12:46 (IST)
State-run oil marketing companies Indian Oil, Bharat Petroleum and Hindustan Petroleum revise fuel prices with effect from 6 am on a daily basis. Government allowed revision of fuel rates on a daily basis since mid-June last year to reflect changes in costs instantly.
Oct 22, 2018 12:25 (IST) 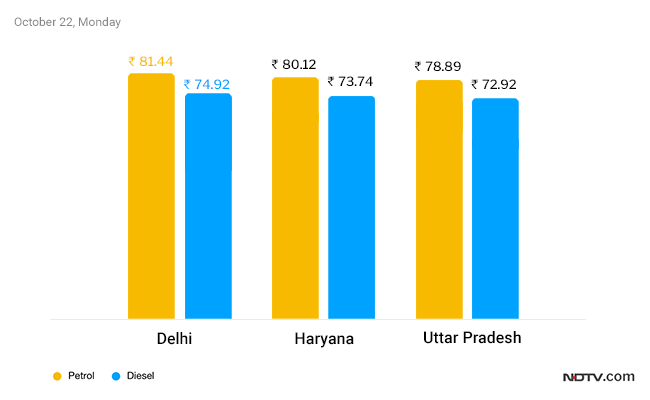 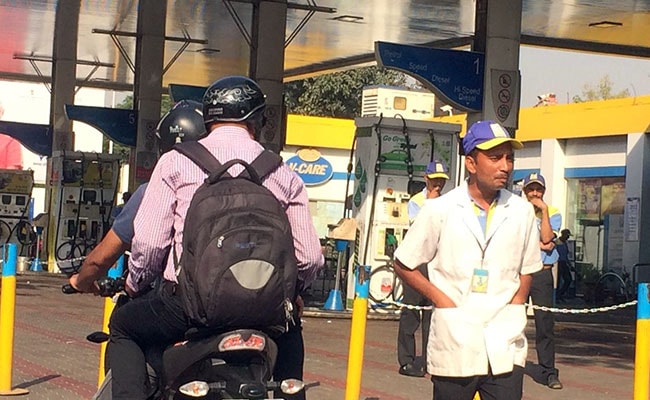 Oct 22, 2018 12:02 (IST)
Amid the strike, fuel prices were cut for the fifth straight day on Monday. Petrol price was slashed by 30 paise to Rs 81.34 per litre in Delhi, while diesel rate was cut 27 paise to Rs 74.92 per litre, according to the price notification of state-owned oil firms.
Oct 22, 2018 11:44 (IST)
DPDA urges the Delhi government to immediately reduce VAT on petrol and diesel and encourage commuters to buy euro VI fuel and save the livelihood of employees and owners of petrol pumps of Delhi and also save state's revenue loss, reported Press Trust of India (PTI). 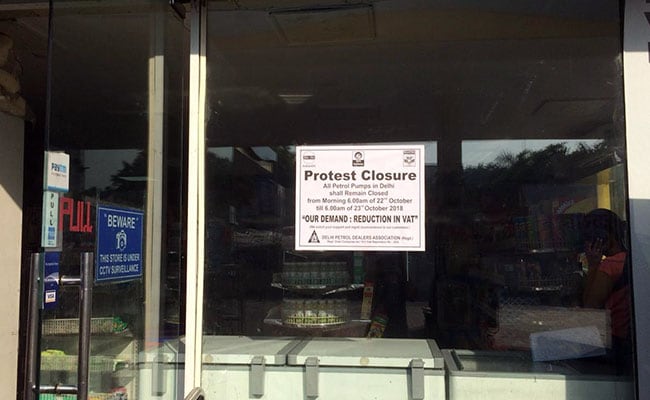 Oct 22, 2018 11:11 (IST)
"Due to difference in prices, there has been a sharp drop of 50-60 per cent in sale of diesel in Delhi and 25 per cent in petrol in this quarter", the DPDA president said.
Oct 22, 2018 11:02 (IST)
On Sunday, DPDA president Nischal Singhania said, "In comparison to Delhi, fuel rates in bordering states like Uttar Pradesh and Haryana are cheaper. Because of high price in Delhi and low prices in states like UP and Haryana, customers are deserting the petrol pumps in Delhi leading to huge drop in sales."
Oct 22, 2018 10:54 (IST)

#Visuals from a petrol pump in Delhi as a protest has been called by Delhi Petrol Dealers Association against Delhi govt's refusal to reduce VAT on diesel & petrol. All 400 petrol pumps along with linked CNG dispensing units will remain shut from 6 am today to 5 am tomorrow pic.twitter.com/rj0nKsLe3d

Delhi: All 400 petrol pumps along with linked CNG dispensing units to remain shut from 6 am today to 5 am tomorrow in protest against Delhi govt's refusal to reduce VAT on diesel & petrol in the national capital. The protest has been called by Delhi Petrol Dealers Association. pic.twitter.com/RYQr85FrZm