Tycoon-Led Banks Could Be Dangerous For India

From the conditional nature of the recommendation, it doesn't appear that the regulator will soon reverse its policy of keeping conglomerates away from banking. But the report could pave the way for backdoor entry.

Is India opening the door for big businesses to take over its banking industry?

A working group set up by the Reserve Bank, the regulator, has suggestions for what to do with ownership of private-sector banks. Large industrial houses may be permitted to own controlling stakes, it says, but only after strengthening regulation and supervision to deal with the problem of "connected lending" - basically diverting depositors' funds to their other businesses.

From the conditional nature of the recommendation, it doesn't appear that the regulator will soon reverse its policy of keeping conglomerates away from banking. But the report could pave the way for backdoor entry. Large groups could acquire nonbank finance firms, which may be allowed to convert into banks. In India's post-Covid desperation for capital, the financial system might go from being state-dominated to tycoon-led.

The 1997-98 Asian financial crisis ought to be a cautionary tale. In Indonesia, unchecked commingling of financial and non-financial activities within a corporate group pushed up the cost of bank rescue to 40% of 1998 GDP. From telecommunications to transportation, India's business landscape is already starting to resemble a Monopoly board. An Indian reprise of J.P. Morgan, the U.S. banker-businessman who used finance to control railroad pricing and stitch together a steel behemoth, would bring the country even closer to the American Gilded Age of the late 19th century. (The eponymous JPMorgan Chase & Co., the world's sixth-largest bank, works under strict Federal Reserve limits on lenders' dealings with affiliates; those restrictions help keep commerce and banking separate.)

Crony capitalism has built up slowly in India, emerging as a Frankenstein's monster a decade and a half after politicians began to unchain the private sector in the early 1990s. That's when - in the name of public-private partnership and rapid economic growth - serious misallocation of credit got under way. In 2018, financier IL&FS Group, which wrote the playbook on how to cynically exploit a poor country's desire for better infrastructure, went bankrupt. The ensuing funding crunch brought down several titans who were controlling hefty assets with slivers of equity.

The great churning since then has reduced competition and raised concentration. Today, the names of domestic balance sheets available to Prime Minister Narendra Modi for any serious heavy lifting can fit on the back of a postage stamp. But his need to find fresh risk-taking private capital is high, especially after the carnage from the pandemic. Per capita gross domestic product in 2025 may be 12% below pre-virus estimates, "implying the largest amount of scarring among major economies globally," says Oxford Economics' Priyanka Kishore.

That's the backdrop to the RBI internal group's review of bank ownership. 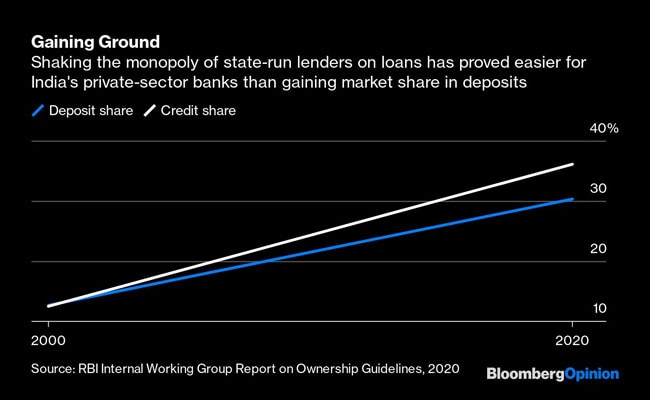 The report came just as the regulator solemnized the sale to Singapore's DBS Group Holdings Ltd. of one such lender, the third failure of a major deposit-taking institution in 15 months. Before that shotgun marriage, the country had 22 universal banks (and 10 so-called small finance banks) in the private sector, with a 30% share of deposits, up from 13% two decades ago. Foreign banks' low 5% share has remained unchanged. Dominant public-sector banks' market share is down to 65%, from 82% in 2000.

This process will only accelerate as state-run institutions consolidate to four from 12. More private banking capital will no doubt be needed. Still, should the country really look to big business to provide it?

There are less risky options. For instance, the RBI can stop insisting that bank licensees - who typically come from another corner of the financing industry - must in the long term dilute their stakes to 15%. The working group wants the ceiling on a controlling stake raised to 26%, but it could have gone higher.

The monetary authority seeks a minimum 40% shareholding for a bank's controlling owner in the first five years. It could easily say: "Keep it at that level if you want for 15 years. Enjoy a greater share of the spoils of sensible risk-taking. If you misbehave, give credit against kickbacks, evergreen bad loans, or run a competing business on the side, we'll restrict your voting rights to 5%, replace your board, and make your bank an M&A target."

The argument in favor of diversified bank ownership - and hence shareholding limits of 15% or 26% - works when boards do their jobs. That didn't happen at Axis Bank Ltd., ICICI Bank Ltd. and Yes Bank Ltd., which failed to rein in their long-standing chief executives as bad loans piled up. The regulator had to seek or bless their ouster. Why pretend that the future will be any different?

For overleveraged groups, bank licenses are a ticket to too-big-to-fail nirvana. Savers trust the explicit deposit guarantee and have implicit faith in the regulator. In Lakshmi Vilas Bank Ltd., where the central bank got DBS to mount a rescue, deposits fell just 2% in the six months to September. This is when everyone knew that the lender - with a negative capital adequacy ratio - was toast.

The regulator mustn't take the public's trust for granted. The IL&FS debacle shows little institutional capacity to stop mischief outside the balance sheet of a traditional bank. To roll out the red carpet to wannabe J.P. Morgans would be an abdication of the RBI's financial stability mandate.