The Growing Brawl Between RBI's Urjit Patel And Team Modi

If the standoff with the government gets any worse, a test of the central bank's dire warning could come soon.

Long-simmering discord between the central bank and the government is turning into a very public brawl. The timing couldn't be more awful for markets.

In a hard-hitting speech Friday on central-bank independence, Reserve Bank of India Deputy Governor Viral Acharya startled his audience by invoking Argentina of 2010.

Back then, the Argentinian central bank chief quit after being coerced to hand over a part of its reserves to the government, causing panic in the markets. Knowing that similar pressures exist in India, investors would be right to ask if Acharya's boss - Governor Urjit Patel - is also contemplating a showdown with Prime Minister Narendra Modi's government. Acharya said the suggestion to explore the theme of institutional independence came from Patel, a strong hint that the topic is of more than academic interest to the central bank, which recently made public its displeasure over losing a part of its turf to a new payments regulator. Last week's stormy and inconclusive RBI board meeting, where the government's nominee directors turned up the heat on Team Patel, is being seen as another indication of a rapidly souring relationship.

The governor, whose three-year tenure ends in September, already seemed resigned to a single term, like his predecessor Raghuram Rajan who went back to Chicago in 2016. Now, as the Times of India says, "questions have arisen over his continuance." That's disturbing speculation in an emerging market facing a hawkish US monetary tightening cycle on one side and a crisis of confidence in domestic lending institutions on the other. A debilitating liquidity squeeze caused by defaults by IL&FS Group, until recently a highly rated infrastructure lender, is causing its own set of problems.
Disagreements on monetary policy between the government and the central bank are common.

Even Donald Trump says he "maybe" regrets giving the Federal Reserve's top job to Jerome Powell, who has been busy countering the US president's late-cycle fiscal stimulus by raising interest rates. The pressure on the RBI is on the banking side, with influential voices portraying it as a regulator that's destroying state-run lenders, and denying credit to small businesses.

PM Modi's government, the biggest shareholder in 70 per cent of the country's banking system, hasn't done enough to restore calm. Quite the opposite. Forcing Patel to carry out an overnight ban on 86 per cent of the country's cash was bad enough, especially since the much-touted $45 billion fiscal bounty from that harebrained exercise never materialized. The ultimate insult, though, was the recent appointment of Chennai-based accountant S. Gurumurthy to the central bank's board. In early 2016, this RBI troll had run a relentless campaign against Rajan's "sledgehammer" approach, saying the former IMF chief economist's purpose in making lenders come clean on asset quality was perhaps to weaken them so that they could be sold to foreigners.

Rajan is long gone, but the spin that the RBI's Western-trained economists are inadequately nationalistic - and out of touch with the reality on the ground - is stronger than ever. Now Patel is under pressure for further tightening the screws on undercapitalized banks and errant corporate borrowers that are worried they may lose prized assets. 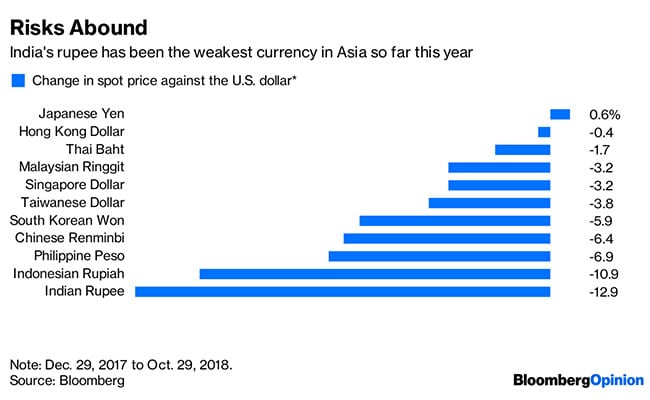 "Governments that do not respect central bank independence will sooner or later incur the wrath of financial markets, ignite economic fire, and come to rue the day they undermined an important regulatory institution," Acharya said in conclusion. The rupee is Asia's worst-performing currency this year, and foreigners have pulled the most money out of domestic stocks this month since January 2008.

If the standoff with the government gets any worse, a test of the central bank's dire warning could come soon.

Opinion: How Modi Government Finally Removed the Elephant in the Room