Of the 15 firms facing long-contested demands, most have shut down, sold out or ended up insolvent. All eyes are now on Vodafone Idea.

India's great telecom melee was bad enough as a brawl between service providers and the state, with operators complaining about the government's outlandish claims on their past revenue. Now, consumers have jumped into the fray. A confusing three-cornered fight could lead to ugly outcomes: The country's broken financial system would take a fresh hit; new 5G networks could be delayed; and the government's annual revenue from the sector might get squeezed.

This week, New Delhi wants nearly Rs 1.5 lakh crore ($21 billion) in back license fees and spectrum usage charges, including penalties, interest and interest on unpaid interest. Before they lost the case in Supreme Court, the telcos maintained the government's interpretation of what it was owed under the 1999 revenue-sharing agreement to be too broad and unfair because it included even their non-telecom revenue, such as interest and dividend income.

It's a Pyrrhic victory for the government because not all the money it wants is coming. Of the 15 firms facing these long-contested demands, most have shut down, sold out or ended up insolvent. All eyes are now on Vodafone Idea Ltd., one of the three private-sector mobile services companies still standing. It has to pay Rs 53,000 crore by January 23, by government estimates. Even taking Vodafone Idea's own calculation of the liability at Rs 44,200 crore, the loss-making carrier's net debt soars to a life-threatening Rs 1.6 lakh crore. It may not be able to meet all its obligations.

The threat of a bankruptcy was real when I wrote about Vodafone Idea's grim prospects in November. With the two large shareholders - Britain's Vodafone Group Plc and billionaire Kumar Mangalam Birla - reluctant to throw more good money after bad, the equity value of the business is hurtling toward zero. 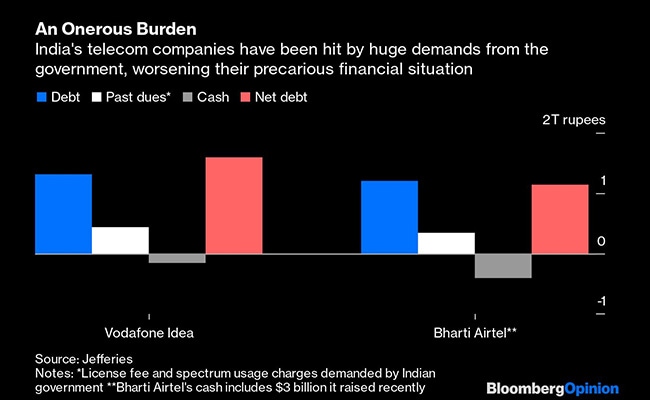 Telcos have requested the country's top court to extend the payment terms. Even if Vodafone Idea stays afloat thanks to a last-minute compromise, customers have read the writing on the wall. The mobile carrier lost 3.6 crore subscribers in November. And that was before all three players raised prices in December. As the churn gets busier, the hypercompetitive Indian market will effectively turn into a duopoly. Bharti Airtel Ltd. and Reliance Jio Infocomm Ltd. will see their market shares settle at around 35 per cent and 45 per cent, respectively, by March 2021, according to Jefferies Financial Group Inc.

Where will this leave Vodafone, or the $1.7 billion that the government earns from the current No. 2 player as annual spectrum revenue? Of the many creditors that have exposure to the telco, Yes Bank Ltd. is particularly vulnerable. Saddled with bad loans, the Indian bank is struggling to raise funds as its capital buffers wear dangerously thin. If potential white knights get cold feet because of the lender's outsize telecom exposure (as much as 29 per cent of shareholders' funds, including 18 per cent for Vodafone Idea), then the country's financial system may be looking at a big confidence shock. 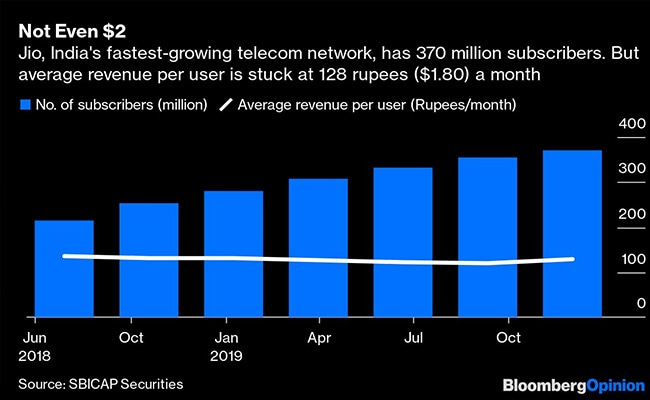 Worryingly, future profitability of the telecom industry also remains unclear. Blame it on the cost-conscious Indian consumer. With telcos raising prices, using one SIM card for calls and another for data isn't cost effective any more. Demand will consolidate, and some of it may vanish altogether. Bharti Airtel recently introduced a Rs 179 plan, valid for 28 days, which offers 2 gigabytes of data, unlimited calls, and comes packaged with Rs 200,000 of life insurance. This is a way to lessen the sticker-price shock for entry-level subscribers, especially in semi-urban and rural areas, who are being nudged to trade up from the current Rs 149 basic plan. Expect more such bundled offerings as both Bharti and Jio try to raise their average revenue per user to around Rs 300, where the economics starts to make more sense.

That's still a ways off, though. Jio, whose aggressive entry three years ago with free voice calls and cheap data triggered cutthroat competition, garnered revenue per user of just Rs 128- not even $2 - in the December quarter, practically flat from a year earlier. Being a new entrant, Jio isn't saddled by the government's revenue demands that have come to haunt Vodafone Idea and, to a smaller extent, Bharti. Until Mukesh Ambani, the deep-pocketed tycoon behind Jio, turns his attention from chasing market share to maximizing returns on his $50 billion foray, pricing will stay irrational and new investment will remain constrained.

Although Bharti has raised new equity and convertible debt, at more than Rs 1 lakh crore, its net debt is onerous. It's hard to see strong demand at the government's auction of 5G airwaves in April. Vodafone's long-standing tax dispute with New Delhi has been a cautionary tale. The business imploding because of another instance of government heavy-handedness will send a fresh bad signal about India's business climate, though for the country's telecom industry, the outlook will remain somber regardless of whether Vodafone Idea survives or not.