India Must End Yes Bank's Theater Of The Absurd

More loan losses lie around the corner. With 40 per cent of deposits coming from fickle wholesale sources, solvency and liquidity risks are high.

Before it results in a tragedy for all of India's banking, regulators need to step in and end the farce called Yes Bank Ltd. The latest shenanigans make it very clear that the authorities need to stop being spectators - and act.

The original cast has vanished. The co-founder who drove the country's fifth largest private-sector bank into a ditch of bad corporate loans has sold out. Institutional shareholders are heading for the exit. Retail investors left holding more and more of the stock are waiting for lifesaving capital. The new management keeps dangling improbable funding options - ranging from an unnamed global technology firm to a Canadian businessman living in a motel - only to strike them off the list of white knights. 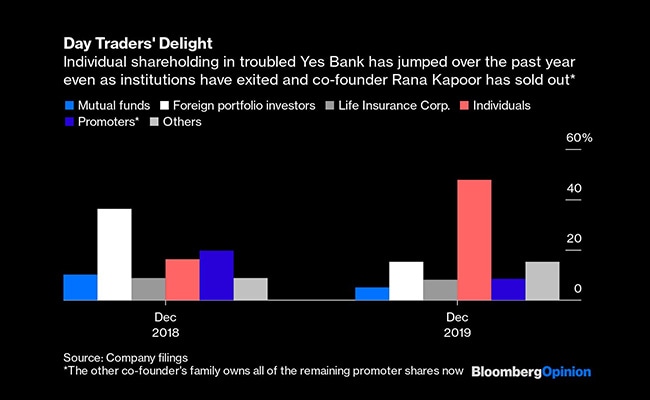 The only thing ticking at the bank is the clock. Common equity tier 1 may just about manage to stay above the regulatory threshold of 8 per cent by March. But 36 per cent of capital is tied up in bad debt that's yet to be provided for. More loan losses lie around the corner. With 40 per cent of deposits coming from fickle wholesale sources, solvency and liquidity risks are high.

At a time when India's financial system is choking on hundreds of billions of dollars of bad loans, the news coming out of Yes still manages to shake confidence. On Friday, the lender announced that the head of the board's audit committee, appointed under previous management, had quit. Following whistle-blower allegations of undisclosed past criminal cases, the bank was examining whether Uttam Prakash Agarwal was "fit and proper" to be a director.

But Agarwal, who says the missed disclosures were an omission, pulled the trigger first. In a letter, he called for a forensic audit of the fundraising process - and its communication to the board and the public - to probe if it was "false, misleading or distorted." The stock, down 88 per cent over the past 17 months, fell more than 5 per cent on Friday.

Following Agarwal's salvo, the only way Chief Executive Officer Ravneet Gill can salvage the situation and his own reputation is by quickly raising around 3 per cent of risk-weighted assets worth of capital. That's a bare minimum. Yet after nearly a year in the job, the ex-Deutsche Bank AG veteran has little to show for his efforts. Most recently, the board ruled out taking money from Erwin Braich, the mysterious Canadian investor. And that, as far as one can see, is the end of the road in Gill's search for an investor who will write a check in excess of $1 billion for a lender that's still hurtling down a rabbit hole. 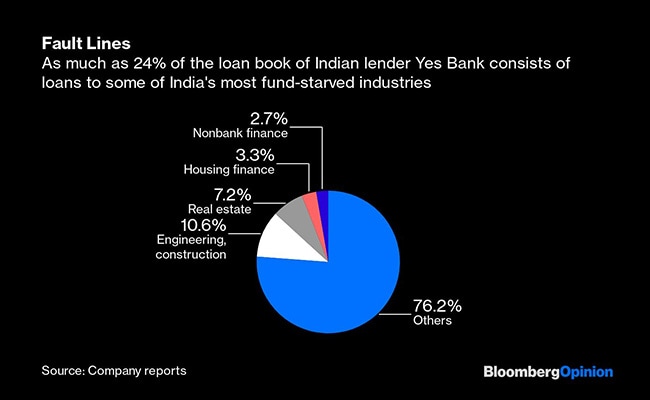 An independent existence for Yes is increasingly unrealistic. There's no safe way to shut it down without inviting system-wide panic. Depositors are already on the edge, trapped in a cooperative bank that failed. What else can be done?

I've previously explored the possibility of a merger with Kotak Mahindra Bank Ltd., which like Yes is also a private-sector lender. But Chairman Uday Kotak, whose good fortune has been all about saying no to loans to which Yes said yes, seems uninterested.

State Bank of India, India's largest commercial lender by assets, may hate the idea of a forced merger. But let's face it: No other banking balance sheet in India might be able to take over a lender with more than $31 billion in advances. More importantly, the SBI is a public-sector bank; if CEO Rajnish Kumar can be prevailed upon to swallow Yes, he can always be given some taxpayers' funds to help with the indigestion. 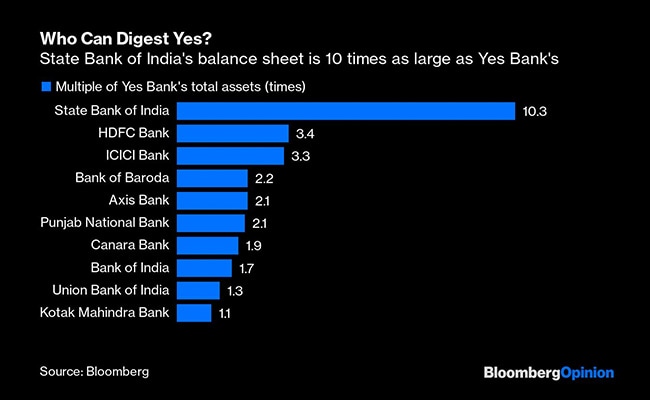 Time is not on India's side. Nominal GDP is expanding at its slowest in more than four decades. An implosion at the bank will be awful news for construction, real-estate and shadow banking, three crucial sectors starved of funding that comprise a quarter of Yes Bank's loan book. This negative feedback loop could be more damaging to confidence than even the surprise bankruptcy of infrastructure financier IL&FS Group in September 2018, which led to an economy-wide surge in borrowing costs.

After Agarwal's letter to the stock exchanges, the regulator and the government, none can pretend to be in the dark any longer about the state of affairs at Yes Bank. It's time they brought the curtain down on this theater of the absurd.