Two years ago, India rolled out a laudable plan to unlock the capital trapped in some of its smaller airports. But the actual outcome from privatization was less than reassuring: All six airfields put on the block went to one bidder.

If that wasn't enough, multiple media reports now say that Ahmedabad, Gujarat-based billionaire Gautam Adani, an early and enthusiastic supporter of Prime Minister Narendra Modi, might also succeed in taking control of the already-privatized Mumbai airport, as well as a new one coming up on the financial center's outskirts.

Airports are natural monopolies. To have one private owner controlling eight or more — a fresh batch of six will soon go under the hammer — can't possibly be great news for airlines, fliers, or businesses operating from the premises.

More worryingly, the concentration of economic power in aviation infrastructure is now symptomatic of a broader trend in India, particularly in businesses where the government supplies a key ingredient, such as telecom spectrum. 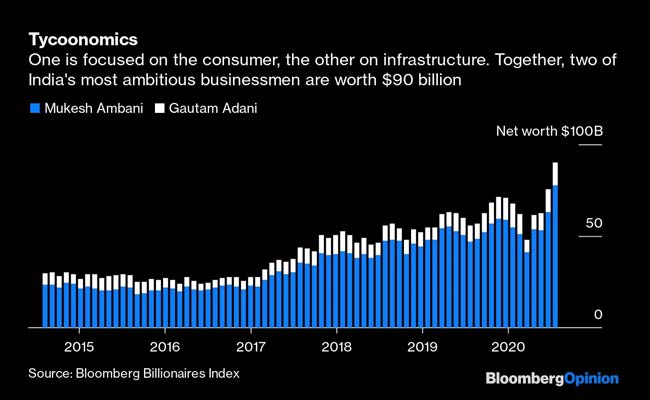 The splashy 2016 entry of tycoon Mukesh Ambani in 4G mobile was a huge boon. The richest Indian single-handedly crushed data charges for customers to 9 cents a gigabyte, the lowest in the world. But a field that once boasted a dozen players is now effectively a duopoly. The fate of a third service will be decided by a court order about how much time Vodafone Idea Ltd. has to pay its share of the $19 billion demanded by the government from telecom firms as past dues.

The worry is that dominance by a handful of capitalists may not leave enough space for others. But then, who's even ready or willing to compete, especially in sectors where state policy has a big role in determining winners? Barring some notable exceptions, the Indian business class is overextended, trapped in the debris of assets created with the help of syndicated loans from pliant state-run banks. Politicians even have a name for it: phone banking, where they make the calls and tell bankers to whom to give loans.

It's impossible to carry on this way. After the Covid-19 disruption, government-owned Indian banks will require as much as $28 billion in external capital over two years to raise their loss provisions on bad loans to 70 per cent and double credit growth from last fiscal year's abysmal 4 per cent, according to Moody's Investors Service. Much of this money will have to come from a government that can't keep a lid on its borrowing costs. A sharp, private credit-fueled recovery for the economy appears to be out of the question.

That's probably why policy makers are resigned to letting whoever has any financing muscles take what they can. There are antitrust laws, but they're being used to investigate discounting practices of Amazon.com Inc. and Walmart Inc.-owned Flipkart, even though their share of overall retail is minuscule. Tax laws have been used to hound startups.

Courts, which can enforce fair and stable relations between the state and business, are adding to the confusion by asking if banks have a claim on airwaves — a sovereign asset — held by insolvent telcos. Who'll lend for 5G networks when such basic issues in creditor rights are undecided?

To top it all, the pandemic and badly soured relations with China provide ample cover for an isolationist campaign of economic self-reliance, which can be used by tycoons to charge local customers more. Adani won the bids for six airports fair and square, but then used Covid-19 to negotiate for extra time to take over three of them. However, when it came to winning the Mumbai terminal from GVK Power & Infrastructure Ltd., its liquidity-strapped current owner, disruption to travel doesn't seem to have damped the group's eagerness. Abu Dhabi Investment Authority and PSP Investments, a Canadian pension fund, were separately talking to GVK about a deal. They have written letters to the Indian government, asking for a transparent transaction, the Economic Times has reported.

India's 2016 adoption of a modern bankruptcy law raised hopes that global capital would have an equal chance to take productive assets out of weak hands. The expectation was that the government would follow the Australian asset-recycling model to pay for $1 trillion worth of new infrastructure. But with insolvency courts temporarily shut to new cases, and so many airports going to one buyer, it's unclear if foreigners' ardor will endure. After the coronavirus, there's no dearth of distressed assets globally.

Just as opening up the economy in the 1990s was a windfall for the current generation of middle-class Indians, excessive economic concentration will be a headache for the next. Like in South Korea, people may one day realize how a few conglomerates are sapping the entrepreneurial energy of everyone else. By then, it will be too late, and the country might be burdened with the equivalent of a “chaebol discount.” Laying the foundations of a competitive economy is still possible. But if India can't ensure that with state assets, the corporate landscape will start looking like a Monopoly board, to its aspiring oligarchs and the rest of the world.