Coronavirus Risks This Sector In India Worth Rs 2 Lakh Crore

No economy is immune to a fast-spreading pathogen. But where activity is organized more formally, authorities can at least try to reach the pain points with liquidity, credit, tax rebates, salary supplements or rental discounts.

None of this is easy in a highly informal economy like India. The lockdowns that nervous cities and states are now forced to impose to slow the coronavirus could upend livelihoods in ways that will be hard for government programs to combat. Shopping malls, cinemas and pubs in the financial capital of Mumbai are shut, along with schools, colleges and the zoo. What remains open is being shunned because of fear. Chicken prices have collapsed across the country as people avoid buying meat from wet markets. Tourism is at a standstill. Eating out is rare.

The cost of protecting against the virus will fall disproportionately on the poor. India has more than 100 million microfinance accounts, serviced in cash every week by gig-economy workers, who hawk vegetables on street corners or embroider saris sold in malls, among other things. Three out of four workers make a living by working casually for others or at their family firms and farms. Prolonged shutdowns will impair their ability to repay loans of Rs 2.1 lakh crore ($28.5 billion), putting the world's largest microfinance industry at risk. 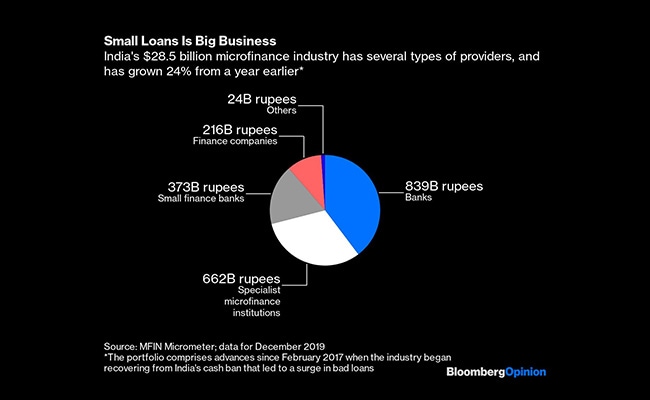 While many countries in Asia, Africa and Latin America also use microcredit to grease consumption at the bottom of the pyramid, India's banks and shadow financiers are already reeling under a severe crisis of confidence. Savers' accounts recently had to be temporarily frozen at a major institution, making people anxious about the health of others. Microlenders have only now recovered from a nonperforming loan crisis sparked by Prime Minister Narendra Modi's overnight 2016 ban on 86 per cent of cash. More bad news would be hard to swallow.

With a population density three times China's, India could be the next global hotspot for the virus, with an avalanche of cases, Bloomberg News reported Tuesday. As the currently low infection count rises with more testing, the curbs on economic activity that will be required to flatten the peak of the outbreak in a nation of 1.3 billion people may have to be harsh. Shutdowns could become as widespread and prolonged as they have in East Asia.

The forced social distancing is going to hit metropolises like Mumbai, New Delhi, Bangalore, Chennai, Hyderabad and Kolkata and tourism centers like Goa. But it comes at a time when the rural economy, which accounts for 45 per cent of gross domestic product, shrank in January for the seventh time in eight months, according to Bloomberg Economics' output tracker. Should city jobs disappear, workers will move to villages, putting further strain on already weak rural wages. Anemic corporate credit and lackluster economic growth were already pulling each other down; a freeze in unsecured lending to the urban poor would make the situation a lot worse.

Tiny loans have their pitfalls. Financiers occasionally lose their heads and loosen their lending standards, leading to excessive borrowing and financial distress, which then becomes a political issue. Toward the end of last year, this problem surfaced in the tea-growing state of Assam, which had witnessed annual growth of 43 per cent for seven years in loan values, before cash collections from small borrowers began to collapse. 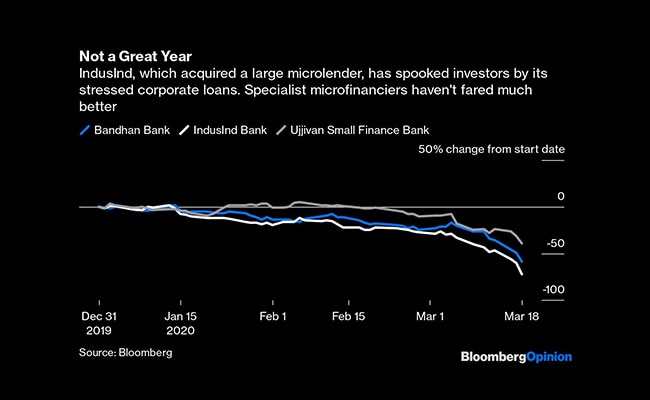 Microfinance specialists such as Bandhan Bank, with its near 20 per cent return on equity, are profitable enough to deal with such occasional hiccups in pockets of a large market. However, a pandemic that cuts across regions could end up being a far more serious threat than a localized flood or a drought.

Even with interest rates being slashed around the world, the Reserve Bank of India kept its powder dry Monday, though deep cuts are bound to be in the cards. Outright cash transfers from the government to the most vulnerable people would be more helpful. Incentivizing small borrowers and women's self-help groups to sustain timely repayments would help the industry and keep credit channels for the poor open. A further loss of sanity in the country's financial system would be prevented.

Before the coronavirus, New Delhi's budgetary situation was parlous. But a combination of interest rate cuts and plunging prices of imported crude oil will hopefully keep a lid on long-term bond yields. Stepping up borrowings to protect livelihoods should be the preferred strategy to deal with the virus. The informal nature of the economy means that relief can't be targeted at firms - it has to reach households.

The Pandemic Isn't India's Only Curve to Flatten