The toothpaste makers results this week offer a fresh look at a puzzle: the Indian stock markets apparent disregard for the country's worst humanitarian disaster in almost 75 years.

Lately, India has had very little to smile about. Something that Colgate-Palmolive Co.'s tepid growth in the world's pandemic epicenter amply demonstrates. The toothpaste maker's results this week offer a fresh look at a puzzle: the Indian stock market's apparent disregard for the country's worst humanitarian disaster in almost 75 years.

Scientists are forecasting 1.2 million deaths by end-August, hospitals are running out of beds and oxygen, and bodies are being dumped in the Ganges river, yet the Nifty 50 index is trading at a price-to-earnings ratio of 31. Even after softening somewhat since February, valuations are still rich. In the Asia-Pacific region, only Australia, New Zealand and Singapore are more expensive.

Colgate offers some shiny clues to the mystery. For the full year, the US multinational's India unit recorded a little over 7% jump in net sales, but since that came atop a 1.2% increase in the previous 12 months, the two-year average works out to less than 5%. This is a company that only once expanded annual revenue by less than 13% in the nine years before 2015. But then came the challenge to its dominance from a yoga guru and his homegrown ayurveda company, followed by Prime Minister Narendra Modi's bizarre ban on 86% of cash in 2016, a banking crisis, a brutal economic slowdown, and finally two waves of Covid-19. Colgate hasn't once managed double-digit growth in the last six years under PM Modi.

Then there's this surprise: Mumbai-listed unit Colgate-Palmolive India Ltd.'s margin. Earnings before interest, taxes, depreciation and amortization in the March quarter rose more than 8 percentage points to nearly 33%. How does a firm that squeezes some chemicals into tubes pass on the pressure of higher commodity prices to consumers amid a raging pandemic?

According to economists, this shouldn't be happening. Wholesale prices in India, a proxy for cost buildup, surged 10.5% last month, the most in 11 years. Consumer price inflation, meanwhile, slowed to 4.3% from 5.5% in March. Leaving aside the differences in the composition of the two indexes, this divergence could be "an early indicator of margin pressures ahead as companies find it difficult to pass on higher raw material costs due to weak demand," Jay Shankar, an economist at InCred Capital in Mumbai, wrote in a note to clients.

Will it? I plotted the change, from a year earlier, in the company's margins against a measure of price pressure: the annual change in the difference between wholesale and consumer price inflation. A higher number indicates that costs are mounting, but in a slow-income-growth environment - such as the pandemic - firms struggle to pass them on. Profitability suffers. 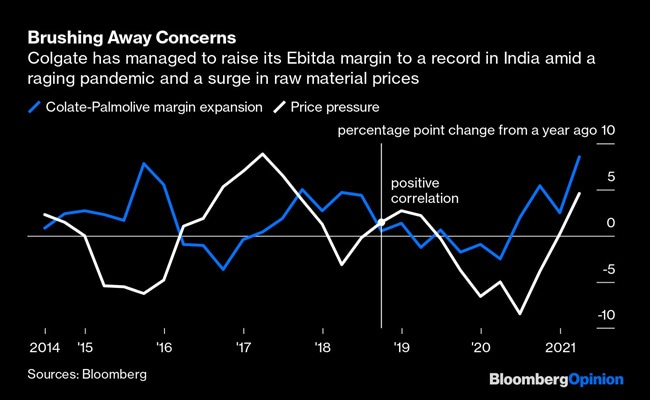 This logic used to hold. Until 2018, margin expansion and price pressures were negatively correlated, but since then they are more likely to move in lockstep. And this isn't true just for Colgate. Unilever Plc's Indian unit, the country's largest consumer goods business, tries hard to not behave like a commodity processor. Its margins respond less to price pressures. But where the two once moved in opposite directions, they're now more likely to follow each other.

One interpretation of this unlikely convergence is that the pandemic has changed habits. Shopping in a store, buyers might put smaller-sized toothpastes in their basket. Buying online during last year's national lockdown, they might have preferred larger quantities to avoid ordering too frequently. The bigger the pack, the higher the producer's margin.

But no longer. During the second wave of infections, consumers are behaving differently. Although curbs on mobility have been fairly strict in metropolitan centers, prompting people to buy more essential supplies online, price inflation in personal care is collapsing. As it is for many other goods. If firms will find it hard to pass on commodity prices at this delicate juncture, households will have trouble absorbing them: Heavily taxed gasoline, which costs 45% more than in the U.S., is already squeezing budgets. Yet in the past three months, the only large consumer non-durables stock to have fallen in India is the cigarette maker ITC Ltd.

Are investors putting too much faith in profit margins? The pandemic's second surge is different from the first. It has spread like wildfire and overwhelmed the health system. Last year's outbreak posed a larger threat to livelihoods. This year, people's biggest fear is losing loved ones. According to calculations by economists at the State Bank of India, out-of-pocket health-care expenses and loss of income because of illness will set families back by Rs 66,000 crore ($9 billion). That's six times bigger than the total toothpaste market in India. Consumers won't stop brushing their teeth, but they will look for cheaper ways to do so. 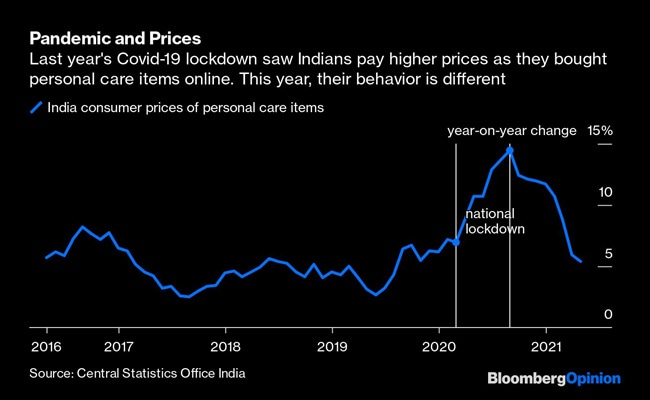 That will force producers to tighten their belts once again to keep investors happy, even though, at the aggregate level, cost-cutting is a zero-sum game. Firms' expenses are households' income. If consumers don't earn enough, insipid demand will prompt India Inc. to make deeper cuts, worsening the situation worse for everyone. Developed countries have offered generous income support to households to break this vicious cycle. There's been none of that in India. Instead, New Delhi inexplicably cut the corporate tax rate six months before the pandemic hit.

Even with depressed spending power, there can be an illusion of asset-price prosperity. When more than 5% of gross domestic product moves in one year from being labor's share of income to additional corporate profit, as a recent study by Bangalore-based Azim Premji University has shown, the equity market acquires new legs. Especially when the central bank - like its counterparts elsewhere - is keeping interest rates low and liquidity abundant. Under current policies, this year may see a repeat: Listed firms will gain at the expense of families and tiny enterprises.

Investors might have to make do with this unhealthy equilibrium until demand conditions normalize. But in the absence of a credible vaccination plan, when will that be? The smiles that are being lost to the pandemic will take a long time to return. Without a bold income support program from PM Modi, even the expanding profit margins may not last.

How Did A Startup Win A Rare Banking License In India?