Amid Preps For Budget, Where India Can Find A Cool $1 Trillion

From consumption and private investment to exports, no cylinders are firing. Government spending is therefore the only hope.

India will need $1 trillion of infrastructure investment to nudge annual GDP growth higher by just half a percentage point in Prime Minister Narendra Modi's second five-year term. Of this, at least 55 per cent will have to come from public resources. Where's the money?

Those figures from an analysis by the Confederation of Indian Industry are the number 1 challenge for Nirmala Sitharaman as the country's new finance minister gets ready to present her first annual budget on Friday. 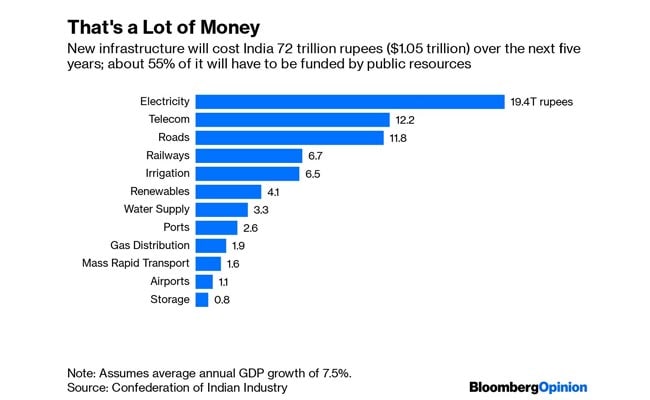 While the scale of investment isn't very different from what India spent in the past five years, the sorry state of corporate balance sheets makes it doubtful whether the private sector can put up its projected 45 per cent share. Besides, the economy is in dire straits, regardless of the near-7 per cent GDP growth portrayed by disputed government statistics.

From consumption and private investment to exports, no cylinders are firing. Government spending is therefore the only hope. But Mrs Sitharaman is in a tight corner. It doesn't help that revenue from a goods and services levy, India's biggest tax innovation of recent times, continues to disappoint two years after its introduction by her predecessor, Arun Jaitley.

With health, education and other government services also needing more money, the scope to free up funds by cutting public expenditure simply doesn't exist. Nor is borrowing an option. Annual federal deficits can't go much higher than $100 billion; borrowing by the public sector is already cornering resources equal to 8 per cent of the economy even as the household sector barely manages to save 9 per cent  to 11 per cent of GDP in financial assets. 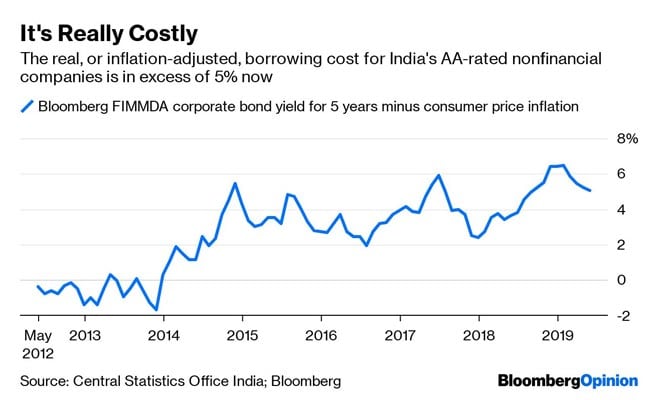 It's what economists call a classic "crowding out" of the private sector. India Inc. is clamoring for lower costs of capital, but the level of public debt is keeping them elevated. Cuts in the central bank's short-term policy rates can't be passed on to private companies if they're not even reducing the government's long-term borrowing costs as much as they should. Besides, a shadow-banking crisis has made lenders mistrustful of the private sector's solvency, especially for debtors that have anything to do with comatose real estate. That's one more reason why inflation-adjusted borrowing costs are 5 per cent-plus.

A consensus is building around the idea that Mrs Sitharaman's best option is to recycle public assets, something that Australian states such as New South Wales have successfully achieved with power grids and other assets. After PM Modi's resounding election victory in May, I wrote that India now has structures like Infrastructure Investment Trusts and a toll-operate-transfer model that it can use to monetize cash-generating toll roads, ports, airports and power plants. "The proceeds from these sales can be used in the creation of new assets," economists at HSBC Holdings Plc said in a recent report. "As such, the same pot of money is recycled several times over, without endangering the fiscal deficit, and yet upgrading India's infrastructure."

Should Mrs Sitharaman take this road, she'll find plenty of interest among investors such as Canada's Brookfield Asset Management Inc., Australia's Macquarie Group Ltd. and Singaporean sovereign wealth fund GIC Pte. India's own National Investment and Infrastructure Fund, which is 51 per cent private-owned, can be a powerful vehicle for mobilizing global interest.

This is the right time. As much as $13 trillion of global debt now offers negative yields. Ten-year US Treasuries yield less than 2 per cent. If ready-made Indian infrastructure can offer dollar returns in the high single digits, it'll get lapped up by yield-hungry investors.

There are caveats, though. Although existing projects will carry no or little construction risk, they would be exposed to future regulatory uncertainty. Only risks that can be priced should be passed on to new owners. Moreover, it will be important for India to auction assets in a manner that leads to fair outcomes. Adani Enterprises was the highest bidder for six functioning regional airports, leading one to wonder why others failed to see the value that it did. (India's cabinet approved leasing three of those airports to Adani on Wednesday; a government spokesman refused to comment on approval for the remaining three.)

In a way, India's 2016 insolvency law was also a recycling mechanism, albeit for corporate assets trapped under unsustainable debt. There was much hope that bankruptcies would attract global buyers. Those that did come - such as  ArcelorMittal and  Bain Capital - got a bruising legal ordeal. With $1 trillion required to build new infrastructure, India can't afford similar bungling when it comes to state assets. That's something Mrs Sitharaman should keep in mind.