No clear timetable for returning Boeing 787 to flight 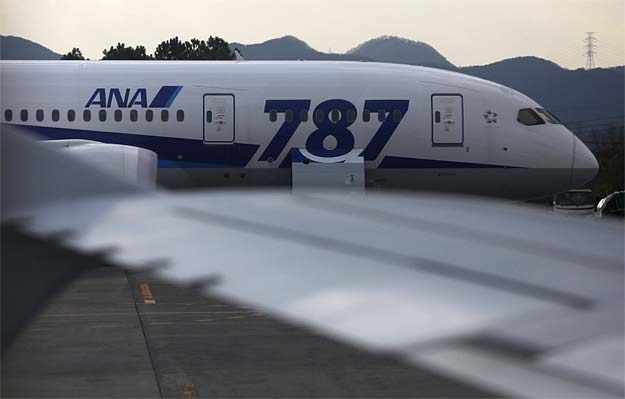 Japanese regulators have joined their US counterparts in all but ruling out overcharged batteries as the cause of recent fires on the Boeing Co 787 Dreamliner, which has been grounded for a week with no end in sight.

Solving the battery issue has become the primary focus of the investigation, though the head of the US Federal Aviation Administration (FAA) said on Wednesday there are still no firm answers as to the cause and no clear timetable yet for returning the plane to flight.

Meanwhile, as deliveries of the cutting-edge passenger jet back up, a key Chinese customer lamented the delays and said its growth plans were being hampered by its inability to get the planes on time.
Regulators grounded the Dreamliner on January 16 after a series of safety incidents, including battery fires on planes in the United States and Japan. The Japanese incident forced a plane to make an emergency landing.

Last weekend the US National Transportation Safety Board (NTSB) said the fire on a Japan Airlines Co Ltd 787 in Boston was not due to excess voltage, and on Wednesday, Japanese officials all but ruled it out for the incident on an All Nippon Airways Co Ltd plane there.

"On the surface, it appears there was no overcharging," said Norihiro Goto, chairman of the Japan Transport Safety Board, at a media briefing. "The fact that such electrical system-related incidents would occur consecutively, purely from my perspective, could not have been expected. We are finding it difficult trying to figure out what kind of investigative stance we should take."

Late Wednesday, the NTSB said more tests are underway on the battery damaged in the Boston fire, including CT scans of the individual cells. The board's chairman, Deborah Hersman, is due to provide a fuller update Thursday.

The investigation has also renewed scrutiny on the FAA's 2007 decision to let Boeing use a highly flammable battery technology on the 787. A US Senate committee will hold a hearing in coming weeks to examine aviation safety oversight and the FAA's decision, a congressional aide said on Tuesday.

NO TIMETABLE
While the NTSB and JTSB hunt for a solution to the battery question, there is also an open issue around fuel leaks on the Dreamliner. In early December, US officials warned of a manufacturing fault with fuel lines, and earlier this month a JAL plane in Boston leaked before takeoff. Industrial manufacturer Eaton Corp said Wednesday it was cooperating with investigators looking at the fuel leaks.

"Without speaking about either the incident or investigation, I can tell you that we do supply pumps and valves to the program," a spokeswoman said.

The 787 program was already years behind schedule before last week's grounding, which means Boeing cannot deliver newly manufactured planes to customers. Boeing's chief 787 engineer, Mike Sinnett, told an aviation conference in Dublin he could not say when that would change.

"I can't really say anything about the timeframe of the investigation. The NTSB is really the only authorized authority in the US to talk about this investigation and they made some recent statements, but I can't speculate on timeframe," Mr Sinnett said Wednesday in remarks made by phone from Seattle.

US Transportation secretary Ray LaHood, the country's top transportation official, said Wednesday the goal was to return the 787 to service as soon as possible but that the government would not rush the plane back either.

"We are working diligently with Boeing to figure out the problem and find a solution. Our goal is to get this done as quickly as possible, but we must be confident that the problems are solved before we can move forward," Mr LaHood told the Aero Club of Washington, an aviation advocacy group.

FAA administrator Michael Huerta, appearing at the same event, said the review was looking at the 787's certification, manufacturing and assembly processes, and that he could not speculate on an end date.

CHINA DELAYS
For at least one Chinese customer, the uncertainty about the Dreamliner's production and delivery schedule has meant delays in launching new routes.

"Frankly, it's a little disappointing the aircraft has been delayed so many times," said Chen Feng, chairman of Hainan Airlines Co Ltd parent HNA Group, in an interview at the World Economic Forum inDavos. "We still think it's a good aircraft, but this has had some effect on our planning."

Hainan has 10 of the planes on order. The grounding of the Dreamliner, an advanced carbon-composite plane with a list price of $207 million, has already forced Japan's ANA to cancel 151 domestic and 26 international flights scheduled for January 23-28, affecting more than 21,000 passengers, the airline said on Monday.

ANA, which flies the most Dreamliners of any airline, is due to announce further flight cancellation plans on Thursday. The airline also said it may have to scale back its next two-year business plan because the 787 was to have been such a central part of that forecast.

AIRBUS UNSCATHED
Boeing has already delivered 50 of the 787s to date. Around half of those have been in operation in Japan, but airlines in India, South America, Poland, Qatar and Ethiopia, as well as United Airlines in the United States, are also flying the plane.

Boeing's main competitor, EADS, said on Wednesday it did not expect the problems with the 787 to affect the certification of its own rival plane, the Airbus A350. "We will do what is needed to avoid the same problems," EADS strategy chief Marwan Lahoud told France's Radio Classic.  Airbus has said it hopes to achieve the maiden flight of the carbon-composite A350 by the middle of this year.