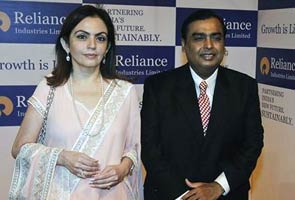 Nita Ambani, wife of Reliance Industries chairman Mukesh Ambani, on Wednesday became the first woman to be appointed on the board of India's largest private firm.

The appointment helps RIL meet a new law requiring listed companies to have at least one woman in the boardroom to boost gender diversity.

"Shareholders of RIL approved the appointment of Nita M Ambani, Chairperson of Reliance Foundation, as Director on the Board of RIL in the AGM held today," the company said in a statement here.

Nita, 50, took the place of Mukesh's uncle Ramniklal H Ambani, who retired from the board at the age of 90.

The RIL board, headed by Mukesh Ambani, 57, currently has his cousins Nikhil R Meswani and Hital R Meswani. Ramniklal H Ambani, who is the elder brother of Dhirubhai H Ambani, the late founder chairman of the company and father of Mukesh, was the other director from the promoter family.

P M S Prasad and P K Kapil are the only non-family executive directors on the company board.

"Nita has been engaged in several initiatives that have strengthened Reliance, right from building the world-class township and the ecological development at Jamnagar, next-generation office campuses, designing customer touch points of Reliance Retail, healthcare initiatives, successfully setting up and running institutions such as Dhirubhai Ambani International School and Mumbai Indians to, most importantly, managing Reliance Foundation," Mukesh Ambani said on the appointment.

Welcoming her, he said Nita, "as an accomplished individual", will add significant value to RIL.

Promoted
Listen to the latest songs, only on JioSaavn.com
In her acceptance statement, Nita Ambani said she took the position with a sense of humility and responsibility.

"RIL has always aimed to better millions of lives and my mission will be to bring speed, scale and social contract to RIL's larger mission. I accept this responsibility as a tribute to millions of RIL stakeholders, as well as to my tireless colleagues at Reliance Foundation," she said.