Mumbai-Ahmedabad Bullet Train: To speed up the construction of viaduct for the country's first bullet train corridor, NHSRCL is adopting the full span launching method. 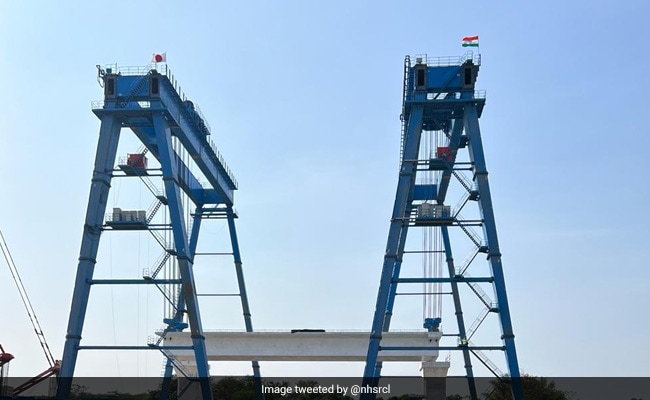 Bullet Train Project: The height of the piers is 13.4 metres from the ground level

The first full-span pre-stressed concrete (PSC) box girder spanning 40 metres was erected in a casting yard in the Navsari district of Gujarat, today, on the upcoming high-speed bullet train corridor between Mumbai and Ahmedabad.

The National High Speed Rail Corporation Limited (NHSRCL) - responsible for the development, execution, and maintenance of the bullet train project, said in a statement today that the 40 metre full span box girder weighing around 970 MT, involving 42 MT of steel was cast in a single piece - without any construction joint on November 1, 2021.

It is also the heaviest pre-stressed concrete box girder in the country's construction industry. To speed up the construction of viaduct for the country's first bullet train corridor between Mumbai and Ahmedabad, NHSRCL is adopting the full span launching method.

The precast girder was picked up from the stacking yard by the straddle carrier and was moved to the predefined location from where it was lifted by the bridge gantry for final erection. The erection marks an important milestone towards completing the Surat-Billimora stretch of the project, said L&T.

The full span girder was placed between the pier 'P11' and 'P12' of the high-speed rail corridor. The height of the piers is 13.4 metres from the ground level, according to NHSRCL.

23 casting yards are being developed along the alignment for casting of the full span girders of 30, 35 and 40 metres. Each casting yard is spread in an area of 16-93 acres as per the requirement and is located near the high-speed rail alignment.

Facilities such as jigs for making rebar cage, casting beds with hydraulically operated pre-fabricated moulds, batching plants, aggregate stacking area, cement silos, and labour camps have been developed in each casting yard for speeding up the casting of girders.

The 508 km long Mumbai-Ahmedabad bullet train corridor will cover 12 stations along its route and reduce the travel time between the two major cities to two hours and 57 minutes, including halts at all stations. Once ready for services, the high-speed rail will operate at a speed of 320 km per hour and will be similar to Shinkansen or the Japan bullet train.