Not one, but all stocks from the Adani group are standing tall in this market.

Even as Indian stock markets witness a steep fall today, a select set of stocks are bucking the weak trend. All Adani group stocks are included in this list.

Not one, all the stocks from Billionaire Gautam Adani's group are standing tall in today's market selloff.

This is not just today's story. This has been going on since the start of 2022.

There were a few hiccups in between owing to Russia-Ukraine war and the broad-based selling it brought. But other than that, the story of Adani group stocks has been ‘Up, up and away'.

I'm sure you must have seen newspaper headlines by now which read ‘Gautam Adani becomes India's richest man after a sharp rally in Adani group stocks' or some such thing.

How often do you see a stock rally almost 100% in a month? Not very often unless of course it's a penny stock.

Since the start of 2022, shares of electric utilities company Adani Power have zoomed a massive 145%. Most of these gains, around 90%, have come in the past one month.

There's not only ‘one single factor' that's driving this rally. The rally is supported by many developments, reported by the company in the past one month.

Last month, the company announced an amalgamation scheme for the merger of its six wholly owned subsidiaries with itself.

The company recently concluded acquisition of Essar Power MP. It is also experimenting with the usage of liquid ammonia in APMuL's power plant at Mundra.

Meanwhile, shares of the company gained 10% yesterday after large chunk of shares exchanged hands in a block deal. 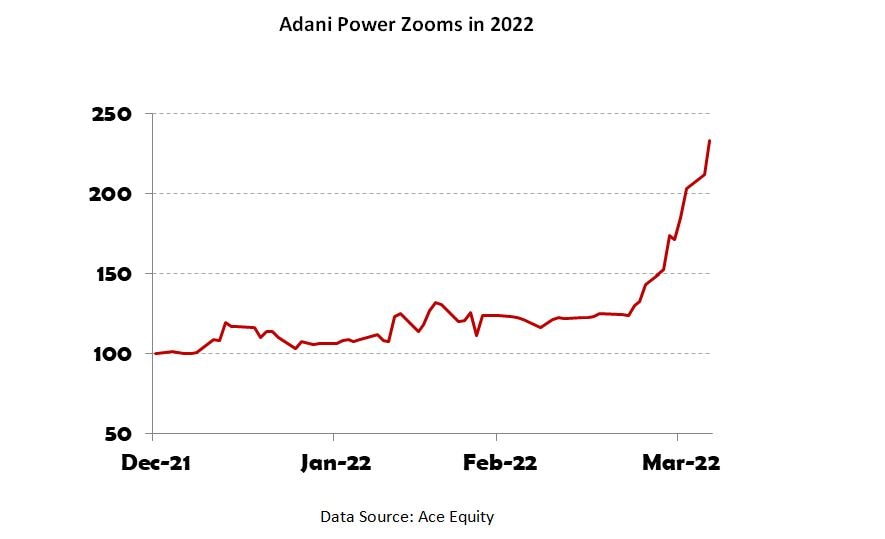 Since its listing in early February, shares of the company have rallied over 130%. Even today, they're locked in 5% upper circuit.

The rally in the stock is justified as there's a massive supply crunch for palm oil, soyabean, and sunflower oil due to Russia-Ukraine war. Adani Wilmar, with a market-leading positions across all these categories, is riding the momentum rally.

Russia and Ukraine are among the biggest exporters of sunflower seed and oil, so there was deemed to be a supply crunch when Russia-Ukraine war broke out.
Moreover, Indonesia banned the export of palm oil, adding to the crunch.

What followed was a rise in palm oil prices, which is providing a margin boost to Adani Wilmar's unsold inventory.

70% and 20% of sunflower oil imports to India come from Ukraine and Russia respectively. Adani Wilmar's management was on TV saying they have 2 months of inventory.

The next big gainer among Adani group stocks is Adani Green Energy.

Shareholders of the company are sitting on 87% gains in the past one year. Those who invested in the stock in January 2022 will also not complain much. In 2022 alone, Adani Green Energy is up 69%.

The company could be rallying on the renewable energy as it's one of the largest renewable companies with a project portfolio of 13,990 MW and 20,284 MW of locked-in growth from under-construction assets as of December 2021.

Interestingly, Adani Green is also one of the best performing stocks since the March 2020 crash, giving around 1,459% returns in two years.

Adani Green funds all its capex through debt from holding companies, debentures, and foreign currency loans.

With the US Federal Reserve all set to hike interest rates to combat inflation, Adani Green might feel the burden on its books. It couldn't generate positive free cash flows in the financial year 2021.

The recent rally can be attributed to the company's foray into electric mobility infrastructure. Last month, it launched its first electric vehicle charging station in Ahmedabad, Gujarat.

It's India's largest gas distribution company. Along with France's Total Group. The company manages a distribution network across 19 geographical areas across the northern states of India.

Going forward, the company is planning to grow its geographical footprint rapidly. It has bid aggressively for city gas distribution authorisation and has won 29 new locations in three different bidding rounds.

However, setting up gas distribution pipelines across these locations requires a capex of Rs 5,000-5,500 crore in the next five years. Adani Total Gas plans on raising this through a mix of debt and equity.

One must note that Adani Total has high debt in its books and inadequate free cash flows. So these expansion plans might increase the books' burden if the interest rates go up.

Shares of Adani Transmission neared their 52-week high today after it announced a fund-raising plan.

The boards of directors of these three companies are scheduled to meet this Friday to consider and approve the proposal for raising of funds.

The already soaring shares could see some action because of this news. Over the year gone by, shares of Adani Transmission are up 124% while in 2022 so far, they have gained 44%.

Adani Enterprises, which is the ‘incubator on establishing diverse new businesses', has a decent performance to show this year.

Factors driving Adani Enterprises' rally could be its subsidiaries doing something or on other various fronts.

The flagship company of the group is aiming to make capital expenditure of more than Rs 55,000 crore over the next few years in new energy, airport, and road sectors.

Adani Ports share price is up 17% in 2022 and it's trading at the same levels it was trading a year ago.

According to experts, Adani Ports is seeing support from the increase in commodity prices worldwide. Due to the rise in prices, the overall transaction cost increases which is favorable for Adani Ports.

Adani Ports has not performed as well as other group companies and analysts are reasoning this behind declining cargo volumes. Cargo volumes at the company declined 11% in the December 2021 quarter as thermal power producers reduced coal imports due to high prices.

Coal constitutes a majority of Adani Ports' cargo volumes. As coal prices continues to rise, large customers may continue to curtail coal imports, impacting volumes in the near term.

Meanwhile, what could be adding to the pressure is Norway's sovereign wealth fund putting the company on its watch list for possible exclusion from investment due to ethical concerns.

Is the hype justified?

As you can see, all the Adani group stocks have had a fantastic run over the past couple of months. All the seven stocks have been consistently performing and only going up.

No wonder Gautam Adani is now the richest person in India.

According to Bloomberg Billionaire Index, Gautam Adani is now India's richest man and has surpassed Mukesh Ambani who held the top spot for a long-long time.

While many of you may have added to your riches by investing in these companies, Co-head of Research at Equitymaster Rahul Shah is happy to have missed this wealth creation opportunity.

According to Rahul, the hype in the companies is not justified. Read his editorial to know why – Why I Haven't Recommended Any Adani Group Stock Yet.

Note: Equitymaster.com is currently not accessible due to technical reasons. We regret the inconvenience caused. Meanwhile, please access our content on NDTV.com. You can also track us on YouTube and Telegram.