LPG Cylinder Gets More Expensive: Here's How Much You Pay Now

Indian Oil said the subsidy transfer in the customer's bank account has been increased to Rs 433.66 per cylinder in the next month.

LPG or cooking gas prices were increased on Wednesday, marking the sixth monthly increase in a row since June. While the hike in subsidised LPG was to the tune of Rs 2.94 per cylinder in Delhi, the increase in non-subsidised cooking gas was Rs 60 per cylinder, Indian Oil Corporation, the supplier of LPG cylinders under brand Indane, said in a statement late on Wednesday. The new LPG rates will be applicable to LPG cylinders in Delhi in November, according to Indian Oil, the country's largest fuel retailer.

Indian Oil said Wednesday's increase in LPG prices was "due to change in international price and foreign exchange fluctuations". It also said that the actual impact on subsidised domestic LPG customers is mainly due to GST (Goods and Services Tax). 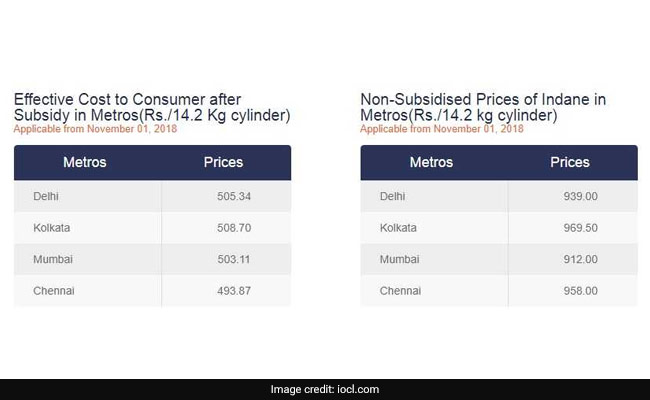 Indian Oil said the subsidy transfer in the customer's bank account has been increased to Rs 433.66 per cylinder in the next month, as against Rs 376.60 per cylinder this month.

The government subsidises 12 LPG cylinders of 14.2 kilograms each per household in a year. It provides the subsidy amount directly in the consumer's bank account. The consumer has to bear the market price for additional LPG cylinders in a year.

This subsidy amount varies from month to month depending on the changes in the average international benchmark LPG and foreign exchange rates.

How To Know Current Petrol And Diesel Prices Through SMS