The US Company That Followed Facebook's Bet On Reliance Jio

Reliance said April 30 that it has received interest from new potential global partners in taking a stake similar to the purchase by Facebook in Jio Platforms.

Reliance Industries Ltd. said Silver Lake Partners will invest about $753 million in its digital unit, days after Facebook Inc. agreed to invest in the business, boosting the efforts of Asia's richest man to cut debt at his conglomerate.

The investment by the California-based private-equity firm is priced at a 12.5 per cent premium to Facebook's $5.7 billion deal for a 10 per cent stake announced on April 22, Reliance said in a statement Monday. The transaction would give Jio Platforms an equity value of Rs 4.9 lakh crore ($65 billion), the Indian company said.

The Silver Lake deal is the latest in a series of fund-raising plans by Chairman Mukesh Ambani, 63, as the tycoon seeks to bolster investor confidence shaken by the coronavirus pandemic. The crash in crude oil prices caused profit at its energy-and-petrochemicals division to drop the most in nearly two decades last quarter. The collapse also added uncertainty in negotiations to sell an estimated $15 billion stake in Reliance Industries' oil-and-chemicals division to Saudi Arabian Oil Co.

Mr Ambani promised shareholders in August that he would cut the net debt at the group, whose businesses span oil refining, retail and telecommunications, to zero from about $21 billion by March 2021. The key part of the plan was a deal with Aramco, as the Saudi oil producer is known. Last week, Reliance said in a filing that talks with Aramco are progressing and it will manage to reach its debt target ahead of schedule. 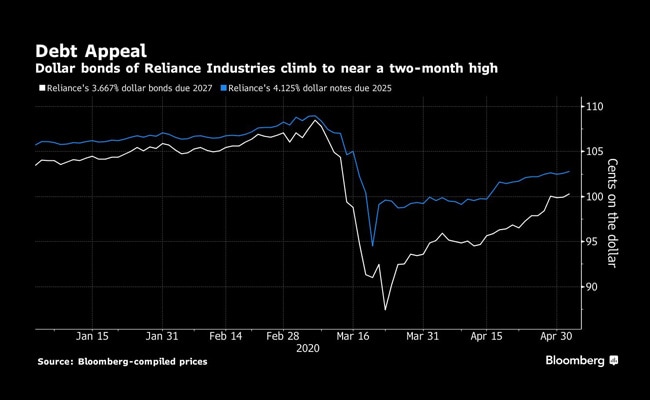 "Even in this uncertain environment globally, Reliance has managed to enter into investment agreements with large global corporates," said Hemant Dharnidharka, chief executive officer at Dharni Wealth, a financial-advisory services firm in Mumbai. "The agreements will help the conglomerate deleverage and meet its target of being a net-debt free company before their timeline. That's being rewarded by bondholders."

With the Aramco talks on course, Reliance Industries said it has sought regulatory approvals to carve out the oil and chemicals division. Investors have sought clues to the progress of negotiations with Aramco, as the Saudi company is known, helping drag the stock to a two-year low in March. The shares have rebounded, gaining more than 60 per cent since the March 23 close, on renewed confidence in Mr Ambani's ability to attract investors.

Besides the stake sales, the board of the Mumbai-based firm last week approved a plan to raise about $7 billion selling shares to existing investors. Shareholders will get one share for every 15 held, at Rs 1,257 each, or 14 per cent lower than the closing price on April 30. Mr Ambani and other members of the founding family who own stakes will subscribe to their entitlement and will also buy any stock left over, under the rights plan.

Shares of Reliance Industries fell 2.1 per cent at the close on Monday, reflecting losses in global markets that have been weighed down by the impact of the pandemic. The stock soared 32 per cent in April, the biggest monthly jump since January 2006.

The tycoon, Asia's richest person with a net worth of $53 billion, is moving the company away from its energy-related businesses to faster-growing consumer segments including its digital platform and retail.

The tie-up with Facebook gives a Silicon Valley stamp to Mr Ambani's ambitions, which have seen him dive first into telecommunications and then e-commerce since taking over what was essentially an oil-refining and petrochemicals company after the death of his father Dhirajlal Hirachand Ambani in 2002. The partnership with India's biggest wireless carrier by subscribers gives Facebook a boost in its top global market, one that is rapidly embracing online payment and e-commerce as more Indians get smartphones.

Reliance said April 30 that it has received interest from new potential global partners in taking a stake similar to the purchase by Facebook in Jio Platforms. Morgan Stanley was financial adviser to Reliance Industries in the Silver Lake agreement. Mr Ambani also has plans for initial public offerings for his non-energy businesses, he said last year.

Reliance "has received strong interest from other strategic and financial investors and is in good shape to announce a similar sized investment in the coming months," it said in a statement. The company "is set to achieve net zero debt status ahead of its own aggressive timeline."