The new Buddhist circuit tourist train is equipped with enhanced features and will cover all the important destinations associated with Buddha's life. 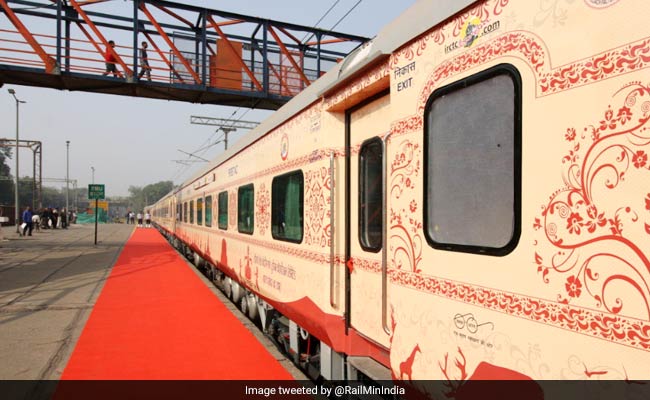 Indian Railway Catering and Tourism Corporation (IRCTC) on Saturday flagged off new Buddhist circuit tourist train from Safdurjung Railway Station. The new Buddhist circuit tourist train is equipped with enhanced features and will cover all the important destinations associated with Buddha's life, mentioned IRCTC on its official Twitter handle- @IRCTCofficial. The train will be travelling through Bodh Gaya, Rajgir (Nalanda), Varanasi (Sarnath), Lumbini, Kushinagar, Sravasti and end with a tour of Taj Mahal, Ministry of Railways was quoted as saying in a Press Trust Of India (PTI) report.

IRCTC launches all new Buddhist circuit tourist train rake which will cover all the important destinations associated with Buddha's life. Equipped with the new features like foot massagers and safety lockers it was flagged off today by the chairman of railway board. pic.twitter.com/QdjYPpd8fg

New Deluxe Tourist Train inspected by Chairman, Member Traffic Railway Board & Secretary, Ministry of Tourism at DSJ during it's first departure on Buddhist Circuit itinerary. This new train is equipped with state of the art equipment and guest amenities. pic.twitter.com/1U3uwM3Igf

3. The other coach amenities include bathrooms on either sides for showers with geysers, urinals in each lavatory.

4. The second coaches have undergone a design change as the railways have done away with the side berths in these coaches which have been replaced with single-seater sofa for panoramic view during journey.

5. A mini library and foot massager with sofa has also been provided.

8. There are two dining cars in the train, aesthetically designed with a seating capacity of 64 each. The two dinning cars of different colour themes have venetian blinds windows for automatic opening and closing of windows blind.

9. The entire train is fitted with CCTV camera for better surveillance and very early smoke detection alarm system for safety and security of the tourists.