India's wheat exports have picked up after global prices spiked in the aftermath of Russia's war with Ukraine, as shipments touched 6.6 million tonnes 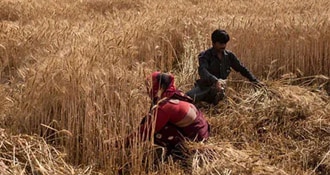 India's wheat exports have picked up after global prices spiked in the aftermath of Russia's war with Ukraine, as total shipments from the country have touched a record of 6.6 million tonnes during the current fiscal.

This information was given by food secretay Sudhanshu Pandey on Saturday.

Addressing media persons, Mr Pandey said that the prevailing global situation is an "opportunity" for Indian exporters as the new wheat crop will be available early from March 15 onwards when compared to other global wheat producers.

India is the world's second biggest producer of wheat in the world.

Russia and Ukraine together account for almost a quarter of the global wheat supply. Their wheat crop will mature in August and September this year. As a result, global wheat prices have already gone up and are ruling in the range of Rs 24,000-25,000 per tonnes, he added.

"Indian wheat exports, as a result, have picked up. By the end of February, we have already exported 6.6 million tonnes of wheat," the food secretary said during a virtual press conference.

So far, wheat exports have crossed the historical high of 6.5 million tonnes achieved earlier in 2012-13 fiscal, he said.

"Still one month is left, you can expect roughly about 7 million tonne plus exports this year," he said, adding that this is good news for Indian farmers and exports.

Wheat, the main rabi (winter) crop, will start hitting the market from March 15 onwards. The country also has a surplus stock of wheat in the government godowns.

Other global players will enter the market later after the end of their summer season.

"We will have adequate stock of wheat and the new crop will also be available to private players for normal export," he added.

The demand for Indian sugar is rising not because of the Russia-Ukraine crisis but due to the tight supply of sweetener for export purposes in the global market that has pushed up the international rates, he added.