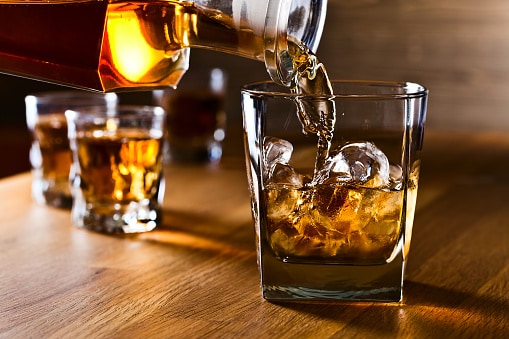 Confederation of Indian Alcoholic Beverage Companies (CIABC) director-general Vinod Giri said that out of the total 2.7 crore litres of bulk scotch imported during 2019-20, only 25 per cent was used for blending with Indian products and rest was used for just repacking it in India as finished product.

"Any special concessions for scotch whisky imported in bulk on grounds it is used for blending with domestic products is an eyewash and cover for packing the same product in India," Mr Giri said in a statement.

"The CIABC has also strongly argued against any preferential duty to scotch imported in bulk," he added.

It has also demanded that products under $5 per bottle of 750 ml should not be given duty concessions.

He asked the commerce and industry ministry to ensure that UK removes non-tariff measures to prevent Indian products from entering their market.

He also rubbished a claim made by certain quarters that imported products account only 1-2 per cent of the total liquor sales in the country and hence the impact of duty reduction will be minimal.

"Even with current customs duty, imported scotch is selling as low as Rs 900-1,000 per bottle in places like Delhi and Gurgaon. Scotch whiskies are already big selling over 5.2 crore bottles a year. Duty concessions coming on top of large marketing and promotional spends by these products will just edge away domestic industry," Mr Giri added.

Retail Inflation Lowest In A Year, Falls To 5.72% In December