With more than 65,000 new infections a day and total cases topping 3 million in a country of 1.3 billion, India's road to recovery appears a long and hard one. 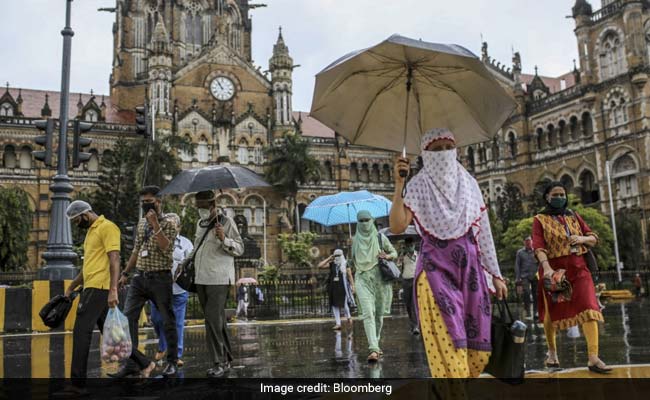 Even before the pandemic struck, Asia's third-largest economy was in the midst of a slowdown

Once the world's fastest-growing major economy, India is set to post the steepest quarterly decline in gross domestic product in Asia as it quickly becomes the global hotspot for coronavirus infections.

With more than 65,000 new infections a day and total cases topping 3 million in a country of 1.3 billion, India's road to recovery appears a long and hard one. A mix of monetary and fiscal measures to prop up the economy have fallen short, leaving millions jobless and destitute, and businesses on the brink of bankruptcy.

Data due August 31 will likely show GDP declined 19.2 per cent in the quarter to June from a year ago, according to economists surveyed by Bloomberg as of Friday. That would be the sharpest contraction since the nation started publishing quarterly figures in 1996, and is worse than any of the main Asian economies tracked by Bloomberg.

Even before the pandemic struck, Asia's third-largest economy was in the midst of a slowdown as a crisis in the shadow bank sector hurt new loans and took a toll on consumption, which accounts for some 60 per cent of India's GDP.

The lockdown from mid-March to contain the pandemic was a blow to the economy like no other. It brought activity to a virtual halt as businesses shut down and millions of workers fled the cities for their rural homes. That's put GDP on course for the first annual contraction in more than four decades -- a full-year decline of 5.6 per cent, according to a separate Bloomberg survey. 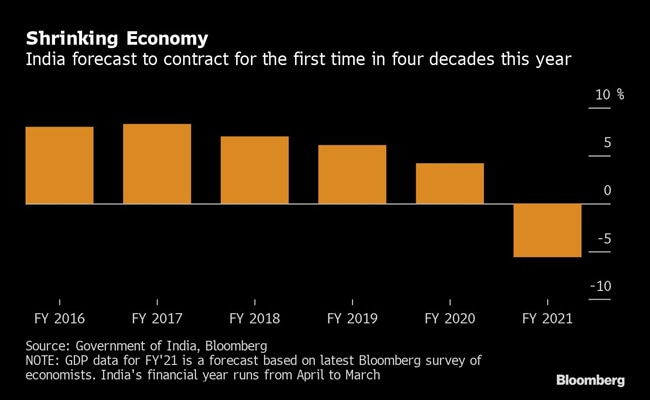 The lockdown dealt an "unprecedented blow to the economy," said Rahul Bajoria, the Mumbai-based chief India economist at Barclays Plc, who estimates GDP contracted by 25.5 per cent last quarter.

"With the national lockdown measures being extended through all of April and May, and most states extending their own partial restrictions through all of June, the rural economy, government spending and essentials will likely be the only sectors mitigating some of the decline," he said.

According to the Reserve Bank of India, transport services, hospitality, recreation and cultural activities are particularly affected in the $2.8 trillion economy. The shock to demand is so severe that "it will take quite some time to mend and regain the pre-Covid-19 momentum," the RBI said in its annual report.

Our analysis shows some sectors of the economy -- agriculture, information technology services and central government expenditure -- recorded an year on year growth despite the disruptions due to the pandemic. These sectors have slightly ameliorated the negative impact of the lockdown, but the drop in GDP is still expected to be large and only marginally better than our earlier expectation.

In addition, there's a higher level of uncertainty around last quarter's data, given the lack of field surveys conducted by the statistics office during the lockdown, which led to incomplete inflation and industrial production reports in April and May. With activity in India's vast informal sector, which makes up almost half of the GDP, unlikely to be reported, output in the formal sector could be used as a proxy and overestimate growth.

"The statistics office could announce GDP contraction of 17.5 per cent year-on-year, which could subsequently be revised to a 25 per cent contraction when the informal sector survey is available," said Pranjul Bhandari, chief India economist at HSBC Holdings Plc. in Mumbai.

The pandemic has caused historic GDP contractions in economies around the world. In India, the situation is made worse by limited fiscal support, leaving the onus on the central bank to provide the bulk of the stimulus. The RBI has cut interest rates by 115 basis points so far this year, boosted liquidity and transferred billions of rupees in dividends to the government. But with inflation above the central bank's target, it's probably reaching the end of its easing cycle, leaving little scope for more support.

Economists expect growth to rebound to above 7 per cent next year, mostly led by pent-up domestic demand, and a pickup in farming and exports. Yet, that's likely to fall short of the recovery that followed the global financial crisis more than a decade ago, when growth averaged 8.2 per cent in the two fiscal years after the crisis, boosted by massive fiscal spending, monetary easing and a swift global rebound.

The pandemic aside, India still has deep-rooted structural problems -- from a struggling and weak banking sector to high public debt -- which will divert government resources away from responding to the current crisis.

"What I am worried about is the structural fault lines that this extreme economic shock will expose over the longer term, and how many years it will take for the economy to get back where it was," said Shumita Sharma Deveshwar, an economist at TS Lombard based in Gurugram, near New Delhi.