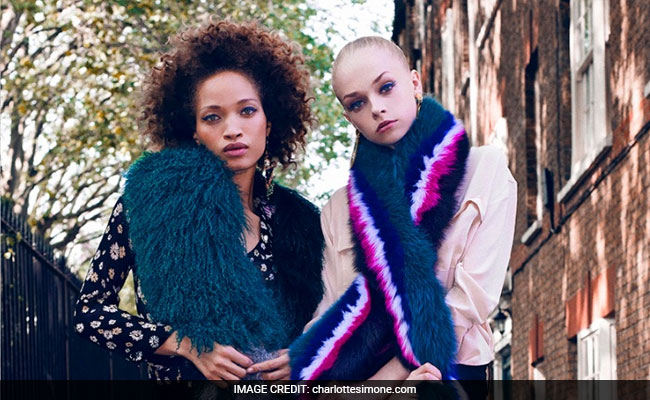 Charlotte Simone sells both fur and faux-fur versions of its scarves.

A curious fashion item appeared on the shoulders of celebrities at London fashion week a few years ago: Big, chunky, furry scarves in vivid colors. Street style star Olivia Palermo was one of the first to don the eye-catching scarf, and by that winter, singer Rita Ora was on board too. Then Vogue took notice of this cheeky new line called Charlotte Simone.

Charlotte Beecham (Simone is her middle name) recalls her shock the first time she saw her creations on the shoulders of a celebrity. Since then, she’s won over dozens of influential celebrities, including Gigi and Bella Hadid, Sienna Miller, and Millie Mackintosh.

“It feels so good,” said Beecham. “Perhaps they know that the brand is run by a young girl and I seem somewhat relatable.”

The 27-year-old designer, who started her business four years ago, finds herself behind the controls of a budding, very profitable scarf empire. Revenues are now in the multi-millions with sales growing 40 percent in the past year, according to Beecham. Harrods, Harvey Nichols, Nordstrom, Bloomingdale’s, Neiman Marcus, and Bergdorf Goodman are selling her scarves. Her biggest markets are in the U.K. and Japan, but through those retailers, Beecham now has her sights on the U.S.

Her biggest hit is the popsicle–a bold fuzzy scarf with a flourish of color at the tip. Most of her styles are vivacious and playful, less serious than what you’d normally see on front-row stars at fashion shows. Lots of the designs have that signature color pop like bubblegum pink or rock-candy blue. Prices run from £175 ($218) faux lambswool styles to £450 real fox fur ones.

They are all, for sure, statement pieces. If you’re wearing a Charlotte Simone scarf, you certainly want to be seen.

Perhaps it’s the attention-grabbing aspect that’s made Charlotte Simone scarves such a darling on Instagram. Beecham runs her label’s account herself, mixing in the everyday designer grind with glamor shots of her scarves for her 60,000 or so followers to enjoy. It’s a major sales driver–40 percent of online sales from its own website are driven from Instagram. And of course there’s the celebrity bump each time one of her scarves is spotted wrapped around one of their valuable necks.

Charlotte Simone's rise began in 2012 when Beecham went with a friend who’d studied fashion design at Parsons School of Design to talk to seamstresses in Manhattan’s garment district. Beecham didn’t know what she was doing–she didn’t go to school for fashion, she majored in English and art at New York University and had wanted to be a journalist. No matter, soon she was hauling around a bag of scarves and went to retail buyers, hoping for someone to bite. Eventually she cornered a buyer from Neiman Marcus and scored her first big order. “That's when I knew I had my foot in the door,” she said.

Yes, the scarves are furry, but they’re not all made of real fur. Charlotte Simone sells both fur and faux-fur versions of its scarves in order to cater to different kinds of women. It also allows the label to be sold at multiple price levels. Beecham is constantly looking for new developments in faux fur fibers to play with, and she said the industry's come a long way in recent years. Faux fur is no longer fashion taboo, she said.

“Maybe 10 years ago faux fur was almost taboo because it wasn’t seen as plush or a luxe material,” said Beecham. “It would often molt. If it rained it would go soggy. It wasn’t necessarily something fashion or uptown women would lust after.”

Beecham plans on sticking to scarves–for now. She’s dabbled in some outerwear and other accessories like caps and keychains. Scarves can often be an afterthought at major fashion houses, taking a backseat to the haute couture runway clothes, ready-to-wear essentials, shoes, and handbags.

At Charlotte Simone, the scarves must remain the stars, she said.