A year ago, the average stock strategist may not have seen that the worlds best-performing index in 2021 would be Mongolia, or that a movie theater chain would rise 13-fold. 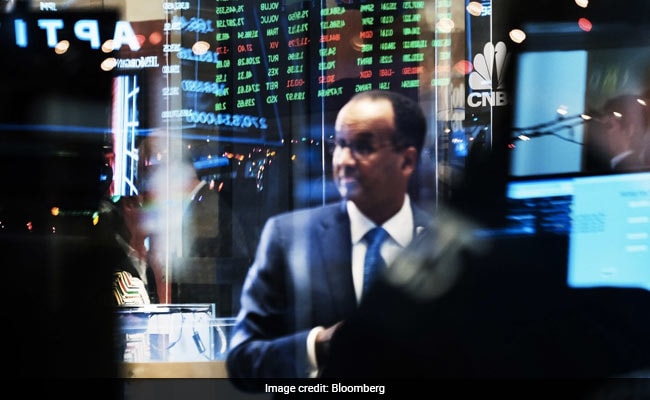 Worries over the Covid-19's omicron variant have sent ripples through world stock indexes.

New Delhi: A year ago, the average stock strategist may not have seen that the world's best-performing index in 2021 would be Mongolia, or that a movie theater chain would rise 13-fold.

And while many were bullish, few predicted the sheer ferocity of the rally that pushed European and U.S. stocks to successive records, or the dip after the emergence of the omicron variant of Covid-19. Even fewer had forecast the slump in China or the liquidity crisis affecting the nation's developers.

In short, it was a year of surprises -- that was the least surprising thing about it. Getting the details right in 2022 will be no easier -- but a few broad themes are likely to persist. 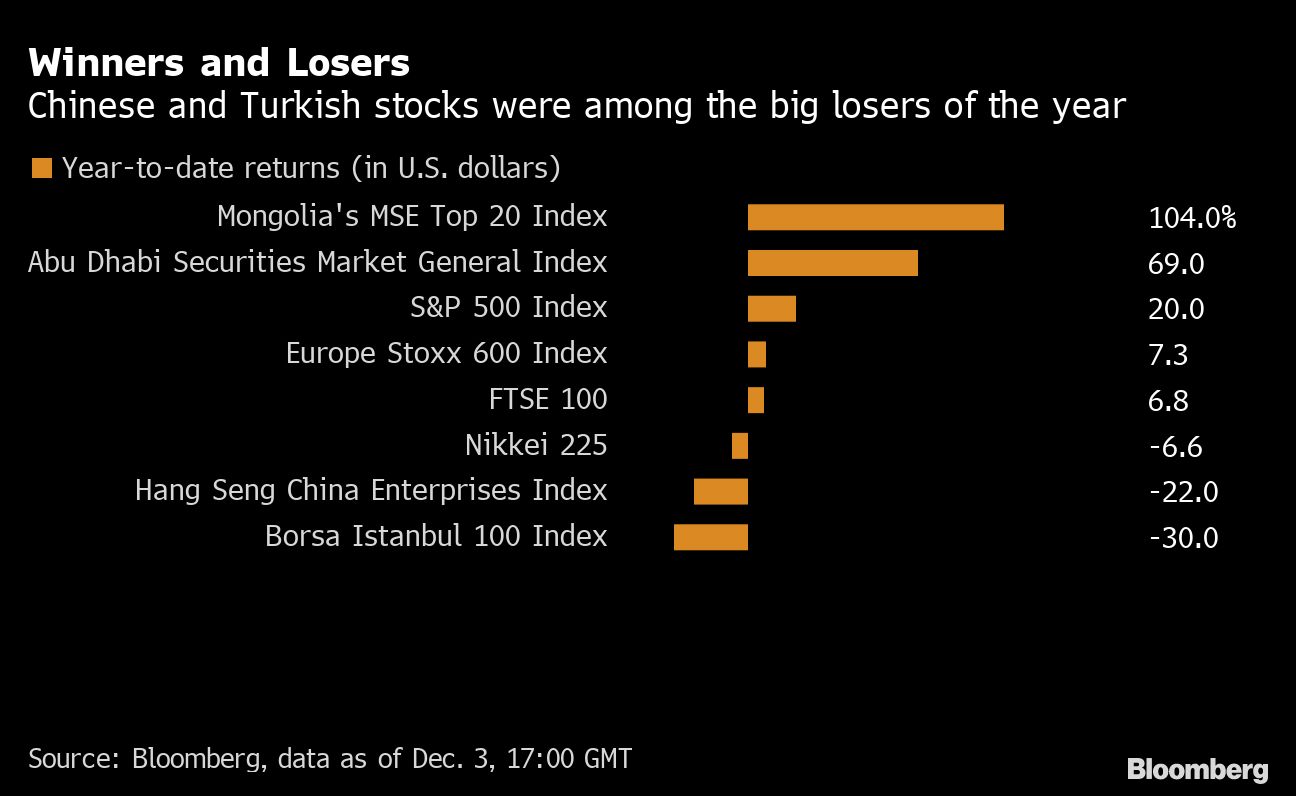 Pandemic developments have been the market's main driver for almost two years, causing a crash in 2020 and then a sustained rally on the back of vaccination programs that allowed an economic reopening. And now worries over the omicron variant have sent ripples through world stock indexes.

Most strategists expect the virus to become a sidenote next year, as the advent of anti-viral pills from Pfizer Inc. and Merck & Co. add to humanity's arsenal against the deadly infection. This majority view hasn't changed in the face of warnings that the new strain may not respond to existing treatments.

Still, if there's one thing the pandemic has taught us it's that equity strategy is one thing, and epidemiology is another. And even if the virus becomes an endemic nuisance, the roller-coaster of restrictions to isolate those infected “is turning into a more persistent drag on growth,” said Romain Boscher, global chief investment officer for equities at Fidelity International. 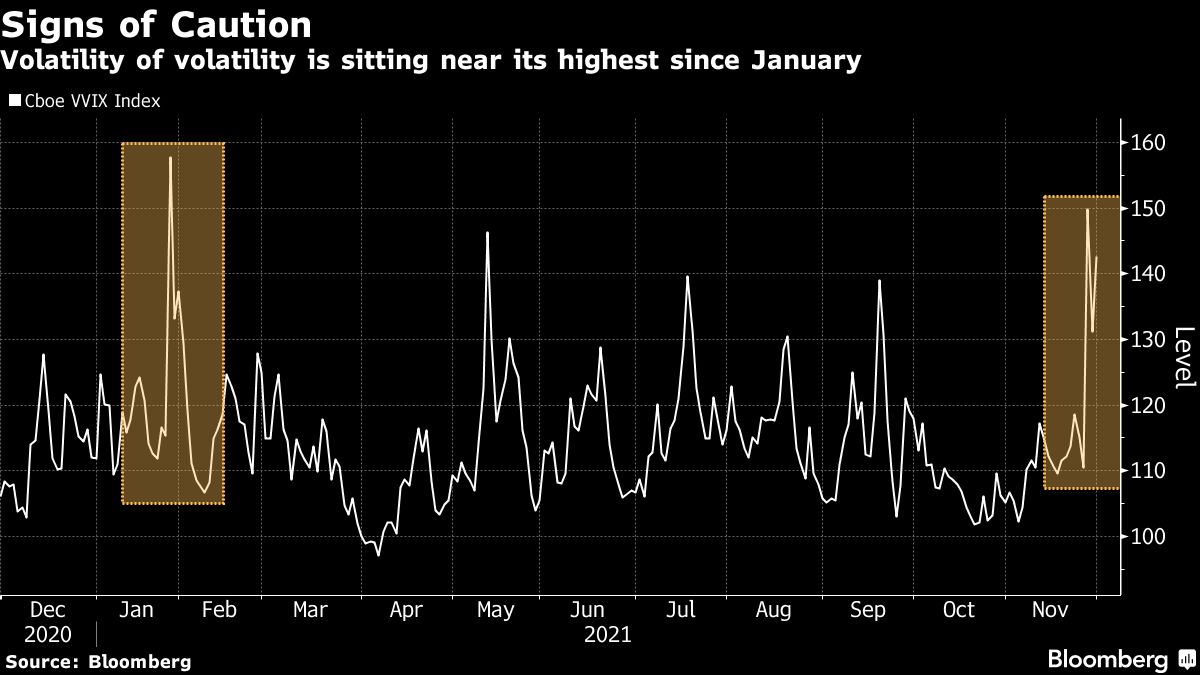 Even if the virus were to disappear from our lives, that would likely still define stock market direction, as there would be no further grounds for fiscal and monetary stimulus -- two of the main drivers of this year's exuberance.

Markets looked through surging prices this year, and for good reason, as soaring corporate earnings proved that companies can pass on higher costs to a consumer that remains willing to spend.

If inflationary pressures ease in coming months, don't expect a relief rally, as that's what stocks have priced in. “Having had its transitory inflation cake in 2021, the market may not get to eat it again in 2022,” Goldman Sachs Group Inc. strategists Dominic Wilson and Vickie Chang wrote in a note. 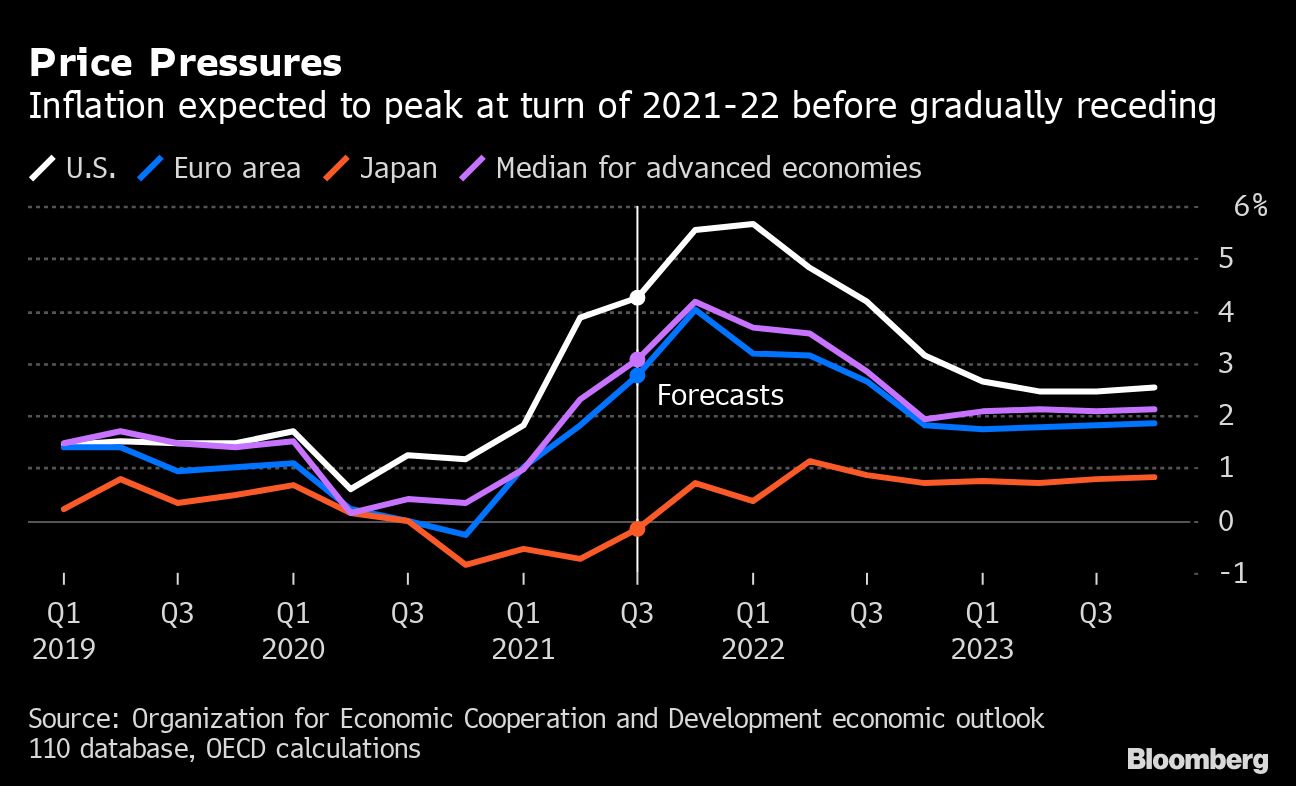 Should price pressures persist, or even intensify, things could get tricky. Stocks are only a good hedge against inflation up to a certain point, which Oddo BHF, WallachBeth Capital and Lombard Odier put at 3% to 5%. Sustained price growth beyond 4% would erode profit and harm stocks, according to Florian Ielpo, head of macro and multi asset at Lombard Odier.

Morgan Stanley's Graham Secker says the impact of the European Central Bank's possible tapering on peripheral European debt is among the biggest downside risks next year, while JPMorgan Chase & Co. strategists singled a hawkish turn by central banks as the key downside to their bullish outlook.

One reason that inflation may stay structurally higher is the transition to climate neutrality, a goal toward which the world's biggest economies -- from the U.S. to India -- collectively committed this year. Higher carbon prices and environmental taxes increase production costs for industrials, while under-investment in fossil fuels has contributed to a spike in energy costs that threatens to dampen growth and disrupt output.

On the flip side, asset managers from BlackRock Inc. to Nuveen say decarbonization creates unprecedented investment opportunities. One needs look no further than electric cars for examples: Tesla Inc. stock has risen more than 1,000% since the start of last year, while Rivian Automotive Inc.'s market value briefly soared to more than $100 billion after last month's trading debut, even though its sales are essentially non-existent. 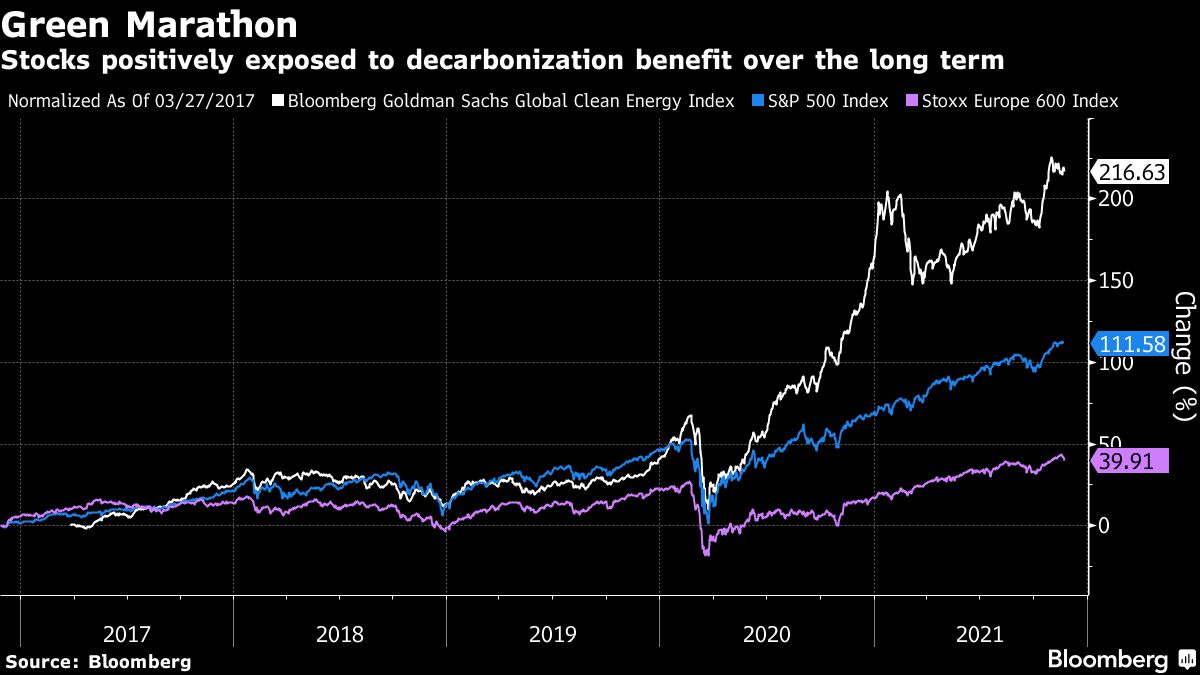 With the Green party now in government in Europe's biggest economy, decarbonization stocks may get a boost after declines this year for the likes of Siemens Gamesa Renewable Energy SA and Vestas Wind Systems A/S.

Facebook's rebranding drew attention to a growing space of economic activity outside the physical world, from social media to gaming platforms. Chipmaker Nvidia Corp. and video-game company Roblox Corp. are just two of the stocks to have surged briefly after Mark Zuckerberg rebranded the company he co-founded as Meta Platforms Inc. 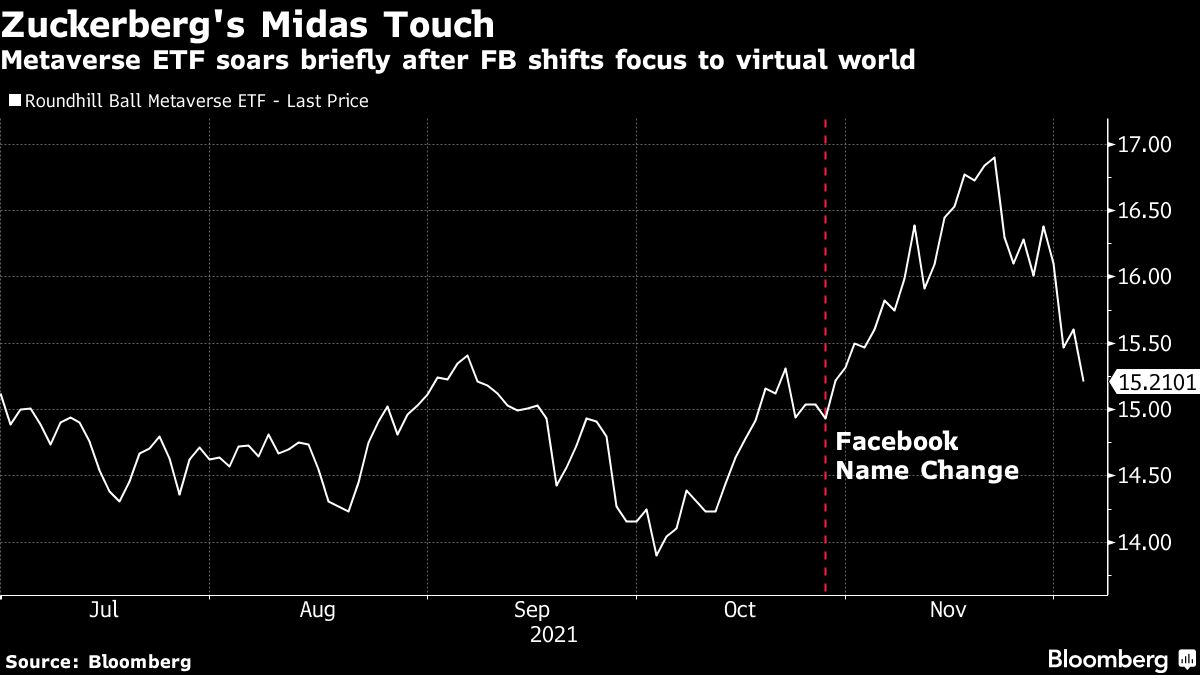 Already, a digital model of a Gucci bag, which can only be used in a gaming platform universe, can cost more than the physical version. That's because people in the developed world now spend more time online than interacting in physical spaces, according to Morgan Stanley. While the move accelerated with stay-at-home orders during the pandemic, it is projected to continue in the years ahead, and may take off for real when Apple Inc. joins the party.

Beijing rolled out swingeing measures to curb the profits of technology giants and tutoring firms this year, and imposed restrictions on lending to real estate developers to cut its dependence on the sector. At the same time, soaring factory-gate prices made it hard for companies to maintain profit margins, while the lack of any significant easing measures by the country's central bank in recent months has taken a toll on economic growth.

Offshore Chinese stocks in Hong Kong are among the world's worst performers this year, while the Nasdaq Golden Dragon China Index is down more than 50% from its February peak. The MSCI China Index is near the lowest versus global stocks since 2006. 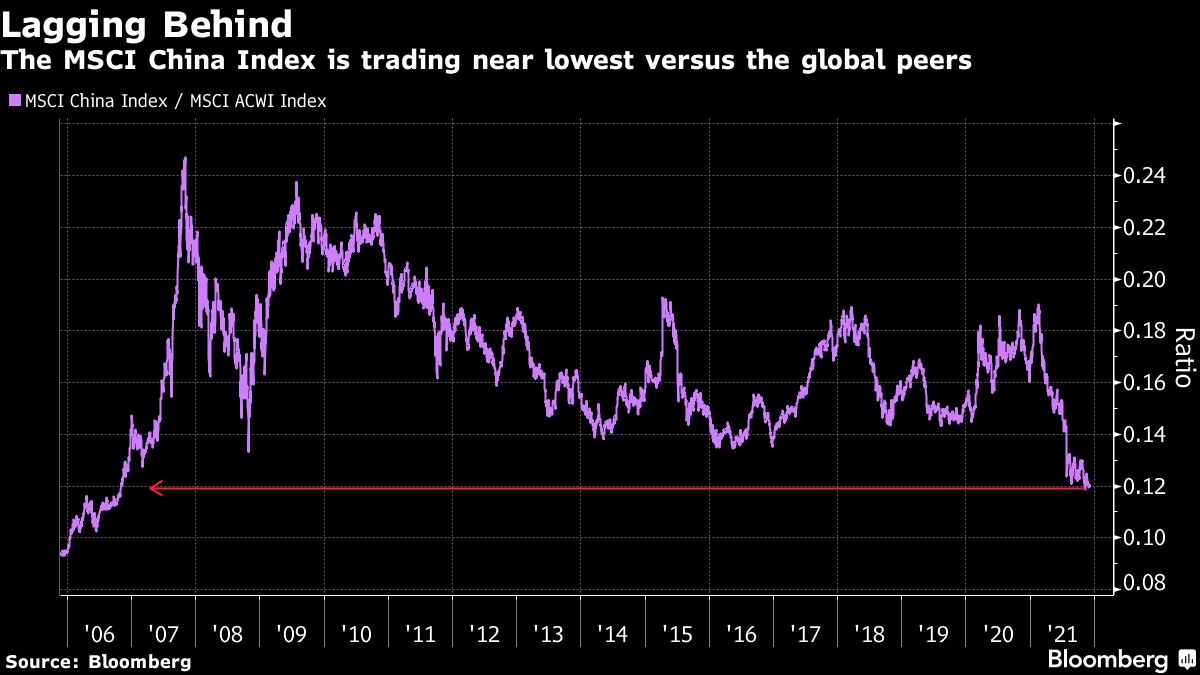 BlackRock sees the peak of regulation having passed and expects more pro-economy measures to start having an impact in the new year, while BNP Paribas predicts Beijing will adjust its policies toward real estate developers and supporting the private sector at a key economic meeting this month.

“We believe the timing to position is right now,” BlackRock portfolio manager Lucy Liu said in a briefing on November 23.

Goldman Sachs is bullish on the investment opportunities associated with President Xi Jinping's “common prosperity” campaign, such as renewable energy. And UBS Group AG says tighter regulations have been priced in, while corporate earnings and valuations are set to improve.

Staying on top of these themes won't necessarily guarantee meaningful returns for investors. Potential black or white swan events are lurking everywhere: from the U.S. midterm elections to the French presidential vote, and from tensions in Taiwan to a full-blown crisis in Turkey's economy following the plunge of the lira. Supply chain bottlenecks will continue to be closely watched, while global warming is another wildcard that traders may need to consider.

It's therefore no surprise that there's no consensus among the world's most prominent strategists about the direction of equity markets: while HSBC Holdings Plc's Max Kettner advises investors to start pulling the plug on stocks in the first half of next year, and sees things brightening up in the second half, UBS Global Wealth Management predicts exactly the opposite -- a good start followed by a deteriorating outlook in the back end of the year.

While Goldman Sachs sees markets grinding higher next year, Bank of America Corp. takes a rather apocalyptic view, predicting low or negative, and in any case volatile returns in 2022.

And if we learned anything from 2021, it is that focusing on the fundamentals of companies you invest isn't always the most rewarding strategy. By ignoring such principals, some retail investors made serious money last year, with AMC Entertainment Holdings up about 1,200%, and GameStop Corp. returning more than 800% for no apparent reason than a social-media fueled craze.