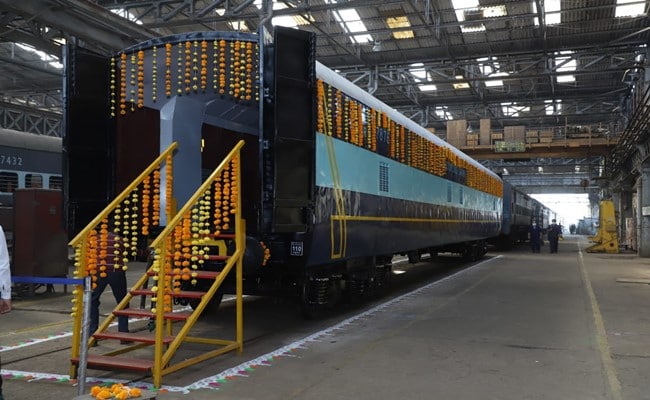 Indian Railways' Parel Workshop under the Central Railway zone has developed a prototype coach for carrying automobiles with a high-speed operating potential, which is likely to provide a boost to freight loading across the rail network. The new automobile prototype is named the New Modified Goods coach (NMGH) having improved fall plate for easier loading of automobiles, fully welded chequered plate floor, natural pipe light illumination, lashing channels for proper securing of vehicles, and louvers for ventilation. The technologically-advanced features will increase the speed potential of the goods coach from 75 to 110 kmph.

It has speed potential upto 110kmph and will undergo RDSO oscillation trails. pic.twitter.com/7sxXH8kxQ4

According to the Central Railways zone, the Research Design and Standards Organisation (RDSO) will now conduct the oscillation trials of this coach. In order to improve the standards of the prototype, there was an interaction between the railway authorities and the manufacturers of the automobile. The suggestions by the manufacturers for improvements in the door design, end opening, fall plate, coach floor design, and proper guidance for loading and unloading was referred by the Central Railway zone to the RDSO. The new modified goods coach is used for the transportation of automobiles. (Also Read: Dedicated Freight Corridor: 40% DFC track to be completed by 2021 )

Meanwhile, it was recently announced that Indian Railways will be operating its freight trains on 40 per cent of the dedicated freight corridor (DFC) network by next year. The dedicated freight corridor project is one of the largest railway infrastructure projects in the country. Around 40 per cent of the DFC route is expected to be completed in 2020-21 which will lead to areas such as Kanpur, Rewari, Khurja, Dadri, Ajmer, Palanpur getting connected to Gujarat ports by the end of 2021. It is being implemented at a cost of ₹ 81,459 crore.