Fiis Are Bullish On These 5 Smallcap Stocks. Here's Why...

With FIIs coming back to India, check out the small-cap stocks where they increased exposure in the most recent quarter.

One of the most simple investment strategies is to track FII movement.(Representational)

Being a full-fledged organisation meant for investments, FIIs naturally have more resources to know about a company compared to retail investors.

Hence, one of the most simple investment strategies is to track FII movement. A lot of investors follow this. Thus, when FIIs buy or sell a stock, there is an impact on a company's share price. On the other end, we all know that small-cap stocks can offer huge returns in a small-time. But they are risky because of their volatile nature.

If FIIs are buying small-cap stocks, there has to be some strong reason behind their bullishness.

If you are eating at your grandma's place and your mom is serving, there is no way that you end up hungry. Similarly, if FIIs are buying and the stock is a smallcap, then there's a good chance the stock might become a future multibagger stock.

So, without further ado, let's take a look into the small-cap stocks which FIIs have been buying recently.

You'll be surprised to know that a year ago, FIIs had zero holding in Salasar Techno Engineering. As of 30 September 2022, they hold a significant stake of 12.2% in the company.

FIIs bought most of the stake in the quarter ending 30 September because on 30 June 2022, they held only 0.9% of total shares.

In a stock exchange filing filed by the company in August 2022, it stated that some of the reputed FIIs like Nomura Singapore, Forbes EMF, etc. have invested in the company.

In the past one year, shares of the company have gained 13%.

Triveni Turbines was incorporated on 27 June 1995.

The company is primarily engaged in the business of manufacturing, and supplying power-generating equipment, and solutions. It has manufacturing facilities in Bengaluru, Karnataka.

Triveni Turbines is a subsidiary company of Triveni Engineering & Industries and has been dealing with machinery for sugar manufacture.

But even in this situation, FIIs did not sell shares of Triveni Turbines. They have been consistently increasing their stake in the company.

FIIs have been increasing their stake in the company since March 2021. FII stake stood at 12.4% in the quarter ending December 2020. The stake increased to 17% by the end of the June 2022 quarter.

Even in the most recent September 2022 quarter, FIIs increased their stake by 5.3%. Hence, their total stake in the company is 22.3%.

In the past one year, shares of Triveni Turbines have gained 43%.

Mastek is an Indian multinational technology company that offers enterprise-level digital transformation services and software for large public and private enterprises in the UK, US, and India.

It was incorporated on 14 May 1982 as Management and Software Technology Private Limited, a business designing and delivering computer software. The name was changed to Mastek on 16 August 1992.

It employs more than 2,200 employees across 11 offices in the UK, US, and India.

With the great FII divestment in full force, Mastek also faced the heat. Between March 2020 and September 2021, FII divested around 2.3% of their stake from the company.

However, winds soon changed for Mastek and from the quarter ending December 2021, FIIs have been consistently buying shares of Mastek.

By the end of September 2022, FIIs held a 13% stake in Mastek. In the most recent quarter, FIIs bought over 5% stake.

It is a sharp increase, especially considering the consistent sale of stakes by promoters.

In the past one year, shares of Mastek have fallen around 42%, in line with other IT companies.

It is headquartered in Chennai. It became publicly listed in October 2020 after an initial public offering (IPO) through an offer by its existing shareholders.

It looks like FIIs have been bullish on CAMS long before their return to India. In the past eight quarters, FIIs have increased their stake by 11%. At the end of September 2022, their total stake in the company was 33.2%.

Interestingly, the promoters of the company have been divesting from the company. From June 2021 to September 2022, promoters reduced their stake by 11%.

For the quarter ending September 2022, the total promoter holding stood at 19.9%, 13.1% lower than the total FII stake in the company.

In the past one year, CAMS share price is down 19%, rare for a fundamentally strong stock but such is the nature of stock market!

Last on the list is Ami Organics, one of the leading research and development (R&D) driven manufacturers of speciality chemicals with varied end usage.

It is focused on development and manufacturing of advanced pharmaceutical intermediates for regulated and generic active pharmaceutical ingredients (APIs), new chemical entities (NCE), and key starting material for agrochemical and fine chemicals, especially from the recent acquisition of the business of Gujarat Organics .

In the past one year, FIIs have almost doubled their stake in Ami Organics. By the end of September 2022, the FII stake stood at 5.7%.

FIIs bought around 3.9% stake in Ami Organics in the September 2022 quarter.

However, it is important to note that during the entire period, FIIs were not consistent buyers. They did sell some stake in Ami Organics in between.

In the past one year, shares of Ami Organics are down 8%.

Take a look at the image below which shows the above smallcap companies on crucial parameters. 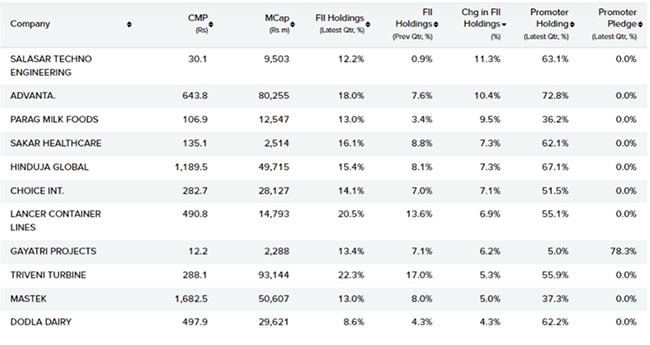 Tracing the activity of FIIs is one of the most popular strategies. But is it a successful one? Not necessarily.

Just like FIIs have more power and resources to research, they are better enabled to bear the losses if an investment goes wrong. FIIs have a lot of money spread over various sectors and countries. Hence if there is a loss it can be washed off by the gain in profit from other investments.

Also, FIIs can run back to the safety of the dollar anytime they feel their investment is threatened. However, that is not the case for retail investors.

Retail investors have limited money, low loss-bearing capacity and limited experience. Hence, they should be very careful while following the footsteps of FIIs.

It's always better to check the fundamentals of the company while tracking FII movements. While stocks based on FII movements may give uncertain returns, fundamentally strong stocks will generate good returns in long term.

Hence, an investor should think, grasp, and then act on any FII movements.