Read inOther Languages
This Article is From Aug 28, 2019

The government also announced FDI in digital media wherein foreign investors can buy 26 per cent stake with its approval. 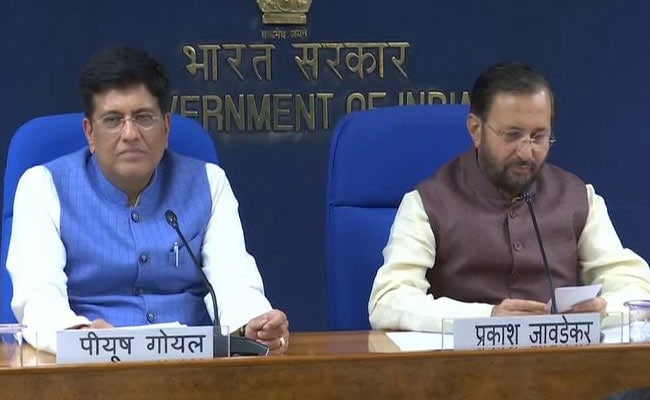 The government approved 100 per cent FDI in coal mining sector including coal washing, sales, crushing etc. through automatic route. FDI norms for contract manufacturing sector has also been relaxed as the government allowed 100 per cent FDI via automatic route in the sector, Commerce and Industry Minister Piyush Goyal told reporters at a press conference in New Delhi.

The government also announced FDI in digital media wherein foreign investors can buy 26 per cent stake with its approval.

The cabinet has expanded the definition of mandatory 30 per cent domestic sourcing norm. It also allowed single brand retailers to start online sales, waiving the previous condition of setting up a mandatory brick-and-mortar store, Mr Goyal said while addressing the press briefing.

“It has been decided that all procurements made from India by the single brand retail trading entity for that single brand shall be counted towards local sourcing, irrespective of whether the good procured are sold in India or exported,” Mr Goyal added.

In a separate cabinet decision, the government also approved export subsidy of Rs 6,268 crore for farmers for exporting 60 lakh metric tonne of sugarcane.