There are widespread shortages of sugar, cooking oil, milk and butter, coffee, tobacco and bottled water, with the situation seeming worse in poorer regions far from the capital. 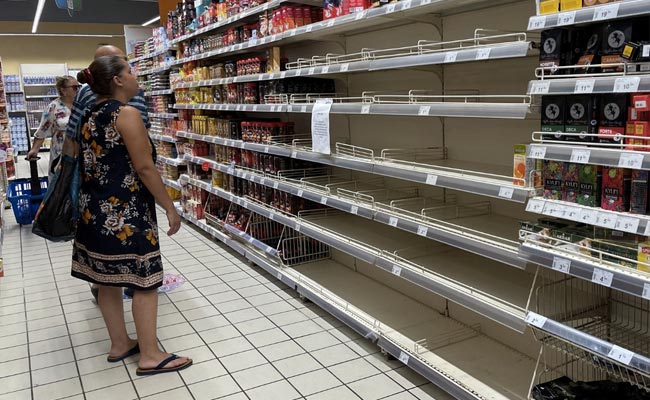 A customer stands in front of empty shelves inside a supermarket in Tunis.

Food shortages are worsening in Tunisia with empty shelves in supermarkets and bakeries, adding to popular discontent at high prices and risking unrest as the government tries to stave off a crisis in public finances.

There are widespread shortages of sugar, cooking oil, milk and butter, coffee, tobacco and bottled water, with the situation seeming worse in poorer regions far from the capital.

Street tea vendor Mustafa Dahech, 82, said he relied on sugar to make the sweet drink he sells in paper cups from a metal teapot as he wanders through the narrow alleys of a poor Tunis district.

"There is no sugar. I swear to you there is none," he said, making it harder for him to raise his income beyond his state pension of $55 a month.

Small protests have already taken place and the head of the powerful main labour union, the UGTT, has warned repeatedly in recent months of a "revolution of the hungry".

The shortages are partly due to a global commodities squeeze and price rise because of disruption linked to the COVID pandemic and to the war in Ukraine.

However, Tunisia may face increased disruption because its weak fiscal position makes it harder to buy staples at elevated international rates and sell them internally at the same subsidised rate it was already using.

The government is seeking an International Monetary Fund (IMF) bailout to help it fund its budget and debt repayments, but support will likely hinge on subsidy and public sector wage bill cuts, and restructuring of state-owned companies.

Talks between the government and UGTT to agree on those reforms - a likely condition of IMF support - are still stuck.

Without an IMF bailout, Tunisia would likely have to borrow internally, restricting credit to local businesses in ways diplomats say could further harm the economy, or use its foreign currency reserves, harming the dinar and raising inflation.

The government has blamed the shortages on the global commodities squeeze and on domestic hoarders and speculators and denied it faces problems paying for imports.

The UGTT said earlier this year that the government was struggling to pay for wheat imports. The World Bank, European Union, Japan and European Bank for Reconstruction and Development have all given Tunisia food aid loans this year.

Dairy producers have demanded state assistance with inflation on animal feed and other running costs which they have blamed for shortages of milk and butter.

A UGTT official has said the sugar shortage has caused outages at several food factories. Workers at a soda drink factory last week protested over the threat to their jobs.

Shortages of coffee, which is being rationed to a single pack per customer in some shops, have also led to some temporary cafe closures.

"We're a cafe. We have nothing but coffee to offer our customers," said Noureddine Ben Hsan, owner of the Independence cafe in Tunis, adding that the coffee, milk and sugar shortages had forced him to close.