The S&P BSE Sensex and NSE Nifty 50 Indexes surged to record highs after the election results showed that PM Modi-led NDA leading on over 300 seats.

The S&P BSE Sensex and NSE Nifty 50 Indexes retreated from record highs hit earlier in the day despite the ruling Bharatiya Janata Party-led National Democratic Alliance (NDA) winning a clear majority in the recently-concluded general elections. Analysts told NDTV that the investors booked profits at high levels as BJP's victory in the elections was factored in and shifted focus to global cues as concerns grew that the China-US trade conflict was fast turning into a technology cold war between the world's two largest economies. The Sensex fell as much as 1,473 points from record high of 40,124.96 and the NSE Nifty 50 Index declined as much as 427 points from record high of 12,041.15 to hit intraday low of 11,614.50. The Sensex ended 299 points lower at 38,811 and the NSE Nifty 50 Index fell 0.69 per cent or 81 points to shut shop at 11,657. Losses in FMCG, metals and information technology shares weighed on the benchmarks.

Here are the highlights of today's session:

#SENSEX Crosses 40,000 for the first time ever #SENSEX40kpic.twitter.com/HkE5i3MFEQ

Ten of 19 sector gauges compiled by BSE were trading lower led by the S&P BSE FMCG Index's 1.6 per cent decline.

"As expected and predicted by exit polls the BJP is going to form the government again. Markets had rallied on Monday and today after the trends started confirming BJP's win Sensex and Nifty hit their new highs," Romesh Tiwari, head of research at CapitalAim said in a note.
But now the market will have to catch up with ground realities of the economy and global factors. Global markets are showing weakness due to US-China trade worries and so our market may settle down or even turn negative in the short term. Traders must stay cautious now, Mr Tiwari said.
Looking at technicals, Nifty has support around 11,730, breaching it on downside might result in more downside towards 11,600, On the upside, any close above 11,800 may take the Nifty above 12,000. Infra and Banking sector may give good returns on the upside. We are positive on DLF, Yes Bank, IndusInd Bank, he added.
May 23, 2019 14:04 (IST)
"With a clear mandate, the new government has scope to tackle significant and long pending reforms in the areas of land and labour. In addition, we expect the government to continue to focus on infrastructure, fiscal consolidation and financial inclusion," Rajiv Singh, CEO, stock broking at Karvy, said in a note.

"With this the long term growth prospects of the economy should improve and unleash animal spirits among investors. Equity markets should perform well over the next five years, Indian households who have been historically underinvested in equities should allocate more of their household wealth to equities to take advantage of the changed landscape," Mr Singh added.
May 23, 2019 13:59 (IST)
"Markets came off record highs as traders booked profits at higher levels as market participants had factored in a BJP win after elections and the result came in line with expectations hence there was apt profit booking at higher levels," Pradip Hotchandani of Prudent Stock Broking told NDTV.
"Going ahead Nifty faces immediate resistance at 12,040 on the upside and support is at 11,590 on the downside. However, traders should avoid taking positions in Nifty in the near term as its is likely to consolidate," Mr Hotchandani added.
May 23, 2019 13:43 (IST)
The overall market breadth which was extremely bullish in the morning turned neutral as 1,272 shares were trading higher while 1,093 were among the laggards on the BSE.
May 23, 2019 13:12 (IST)
Sixteen of 19 sector gauges compiled by BSE were trading higher led by the S&P BSE Capital Goods Index's 2.5 per cent gain. On the flipside, S&P BSE FMCG Index was top loser, down 0.87 per cent. IT and Consumer Durables Indexes also declined 0.2 and 0.4 per cent each.
May 23, 2019 12:58 (IST)
"The election results have predictably led to a rally in markets. While in the short term, markets are likely to pause for a breather, the longer term outlook looks good," Vivek Ranjan Misra, head of fundamental research at Karvy Stock Broking said in a note.
We believe the cyclical slowdown will be over by second or third quarter of the current financial year. What makes us feel positive is that the current government is likely to carry out much needed structural reforms that should improve long term growth prospects, and bring back focus on infrastructure build out. We expect the government will continue on the path of fiscal consolidation. We advise investors to invest in banks, capital goods and autos. We also believe that mid-caps should start performing better, Mr Misra added.
May 23, 2019 12:38 (IST)
Market Update: Indian equity benchmarks came off record highs tested earlier in the day. The Sensex was up 0.44 per cent or 171 points at 39,281 and the NSE Nifty 50 Index was at 11,793, up 0.47 per cent or 56 points. Earlier in the day, Sensex surged over 1,000 points to cross 40,000 for first time and Nifty climbed over 300 points to move above 12,000 for the first time.
May 23, 2019 12:24 (IST)
The Bharatiya Janata Party-led National Democratic Alliance (NDA) was leading on 337 seats indicating that Prime Minister Narendra Modi will win the second term. Congress-led UPA was ahead on 91 seats out of the 542 parliamentary seats. In the crucial state of Uttar Pradesh, which sends 80 members to the Lok Sabha, BJP was gaining on 57 seats, Mahagathbandhan of Samajwadi Party and Bahujan Samaj Party was collectively gaining on 22 seats and Congress was gaining on 1 seat. 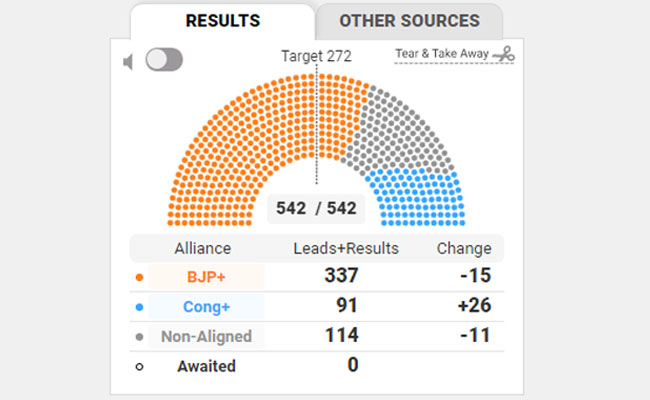 May 23, 2019 12:16 (IST)
Low inflation, ample liquidity support from the central bank and expectations of easier monetary policy was helping sentiment for the bond market.
The benchmark 10-year bond yield was down 5 basis points at 7.21 per cent after touching 7.19 per cent earlier, its lowest level since April 9, 2018, news agency Thomson Reuters reported.
May 23, 2019 12:14 (IST)
"As expected markets have rallied but for this rally to sustain concrete steps are needed to address liquidity and credit stress," said Rajeev Pawar, a group head at Edelweiss Financial Services told Thomson Reuters. "Revival, reflation and reform should be the mantra going ahead," he added.
May 23, 2019 12:07 (IST)
Mid- and small-cap shares were underperforming their larger peers as the S&P BSE MidCap Index rose 0.75 per cent and S&P BSE SmallCap Index advanced 0.45 per cent compared with 1 per cent gain in the Sensex.
Top 5 Mid-Cap Gainers:
Top 5 Mid-Cap Losers:
May 23, 2019 11:45 (IST)
In the Nifty 50 basket of shares, 38 were advancing while 12 were declining.
Top 5 Nifty gainers
Top 5 Nifty losers
May 23, 2019 11:28 (IST)
"Now that the elections are out of the way, it would be important to see how the government deals with challenges like crisis at Jet Airways, liquidity concerns at NBFCs and issues faced by DHFL," AK Prabhakar, head of research at IDBI Capital, told NDTV.
Mr Prabhakar advises investing in public sector undertakings and infrastructure companies as they offer value at current levels. He also suggests avoiding non-banking finance, FMCG and auto stocks.
May 23, 2019 11:26 (IST)
Markets have come off the record high levels as traders booked profits at higher levels, analysts said. As of 11:24 am, the Sensex traded 1 per cent or 437 points higher at 37,547 and the NSE Nifty 50 Index rose 1 per cent or 117 points to 11,855.
May 23, 2019 11:16 (IST)
"Markets were nervous regarding the fractured mandate now that the mandate is clear, the economic reforms which were supposedly to be on track will now be on track. The results reiterate that India would grow because had it been a fractured mandate and with many parties, the reforms would have taken a back seat," Vijay Chopra of Enoch Ventures told NDTV over phone.
May 23, 2019 11:06 (IST)
Energy stocks spiked led by heavyweights Reliance Industries and Bharat Petroleum. The Nifty Energy index - comprising oil & gas and power stocks - rose as much as 2.94 per cent in intraday trade. At 11:01 1m, prominent gainers on the sectoral index were Bharat Petroleum, Hindustan Petroleum and Reliance Industries.
May 23, 2019 10:54 (IST)
"Nifty is looking strong going ahead and in the near term it can go up to 12,200. On the downside support for the index lies at 11,800," Sumeet Bagadia, associate director at Choice Broking told NDTV.
May 23, 2019 10:44 (IST)
The NSE Nifty 50 Index crossed above the 12,000 mark led by surge in banking shares. The Nifty Bank Index climbed over 1,000 points to 31,589. The gauge of PSU banks on the NSE surged a whopping 7 per cent with shares like Bank of Baroda, Indian Bank, Canara Bank, State Bank of India, Punjab National Bank and Syndicate Bank rising between 5.5-12 per cent each.
May 23, 2019 10:41 (IST)
"Trends suggest a confirmation of the exit poll results, which has been taken positively by the market. Though the current index level already captures this outcome, any further trend in creating a more stable government will be considered positive by the market. Once the new government gets sworn in the focus needs to shift to arrest the recent slowdown in consumption and improve investment climate so that the GDP growth rate is sustained above 7.5 per cent", said Abhimanyu Sofat, head of research at IIFL Securities.
May 23, 2019 10:33 (IST)
The S&P BSE Sensex hit an all-time high of 40,000 for the first time as early leads showed that Prime Minister Narendra Modi winning the second consecutive term. The Sensex surged as much as 901 points to record high of 10,012.
May 23, 2019 10:22 (IST)
The stock markets extended gains as trends for all the 542 seats  were out and was indicating that the BJP-led NDA was gaining on 321 seats while Congress-led UPA was gaining on 109 seats. Indicating that the Narendra Modi will win second term easily. The results are in line with street estimates and what the exit polls were predicting.

May 23, 2019 10:12 (IST)
The overall market breadth was extremely bullish as 1,349 shares were advancing while a little over 400 shares declining on the BSE.
May 23, 2019 10:03 (IST)
Shares of Adani Group and Anil Dhirubhai Ambani Group companies were trading higher as PM Narendra Modi-led NDA was seen gaining  on more than 300 seats in the counting of votes for the general election. 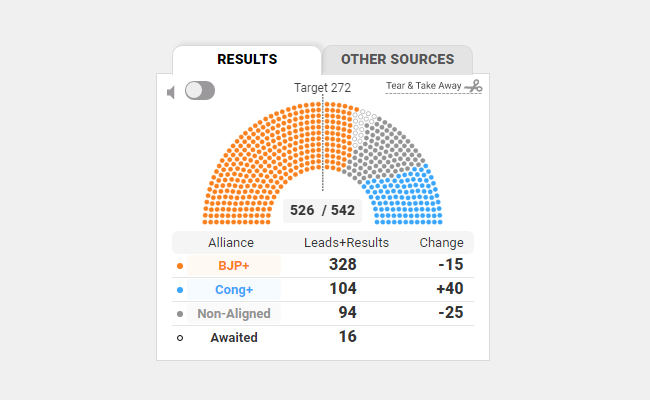 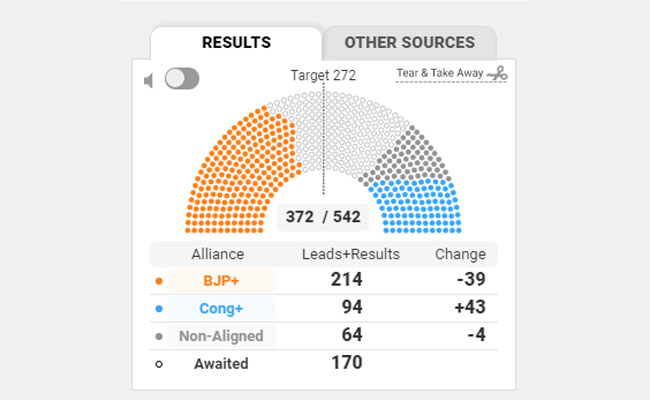