Delhi Metro Pink Line: The integrated structure is coming up on the Majlis Park-Maujpur corridor at the Soorghat metro station, according to Delhi Metro Rail Corporation

Delhi Metro will build the first ever integrated flyover-cum-metro viaduct structure along with a vehicle underpass in association with Public Works Department (PWD), according to a statement shared my metro operator Delhi Metro Rail Corporation (DMRC). The underpass will come up near Soorghat on the Majlis Park – Maujpur corridor of the Delhi Metro Pink Line corridor in northeast Delhi.

The PWD flyover and the vehicle underpass are a part of a proposed elevated road along the Yamuna River parallel to the Ring Road between the Wazirabad flyover (Signature Bridge) and Ring Road near DND, according to metro authorities. 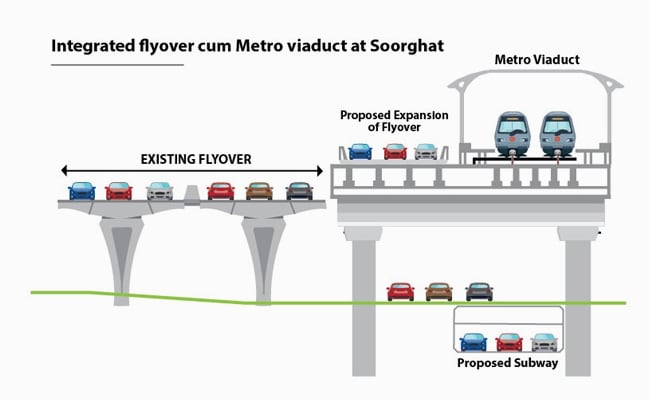 Over these portals, the road flyover and the Metro viaduct will be constructed and run parallel to each other for a length of approximately 450 m, and a total of 21 portals with an average width of 26 metres and a height of 10 meters will be erected.

The width of the Metro viaduct will be 10.5 metres and the road flyover moving adjacent and parallel to it will be a three lane road of approximately 10 metres in width. The proposed PWD flyover will operate adjacent to the existing flyover which is currently operational from Wazirabad to ISBT near Soorghat.

The integrated structure is coming up on the Majlis Park – Maujpur corridor at the Soorghat metro station. The 12.098 kilometres long corridor covers eight stations and is completely elevated. The extension of the Pink Line corridor will complete the ring of the Majlis Park-Shiv Vihar corridor and will be the first ever ring metro corridor in the country with a length of around 70 kilometres.