Crypto Enthusiasts Turn to Technicals for Guidance After Slump

Amid another choppy day for most cryptocurrencies, digital token aficionados are turning to technical indicators for clues as to where Bitcoin and Ether may go next.

Cryptocurrencies have sold off in recent days amid a regulatory risks concerns.

New Delhi: Amid another choppy day for most cryptocurrencies, digital token aficionados are turning to technical indicators for clues as to where Bitcoin and Ether may go next.

Bitcoin, mired in a rough spell that's seen it lose near 20% since its record high earlier this month, has been trading below its 50-day moving average, which many see as a bearish development. Ether, on the other hand, on Wednesday managed to bounce off of its own such trendline.

The second-largest token sees good round-number technical support at $4,000, according to Mike McGlone, a commodities analyst at Bloomberg Intelligence. “It seems to be a battle with the leveraged longs from higher levels getting flushed and the longer-term, more institutional bid below the market,” he said. McGlone sees Ether consolidating its bull run within the $4,000 to $5,000 range. 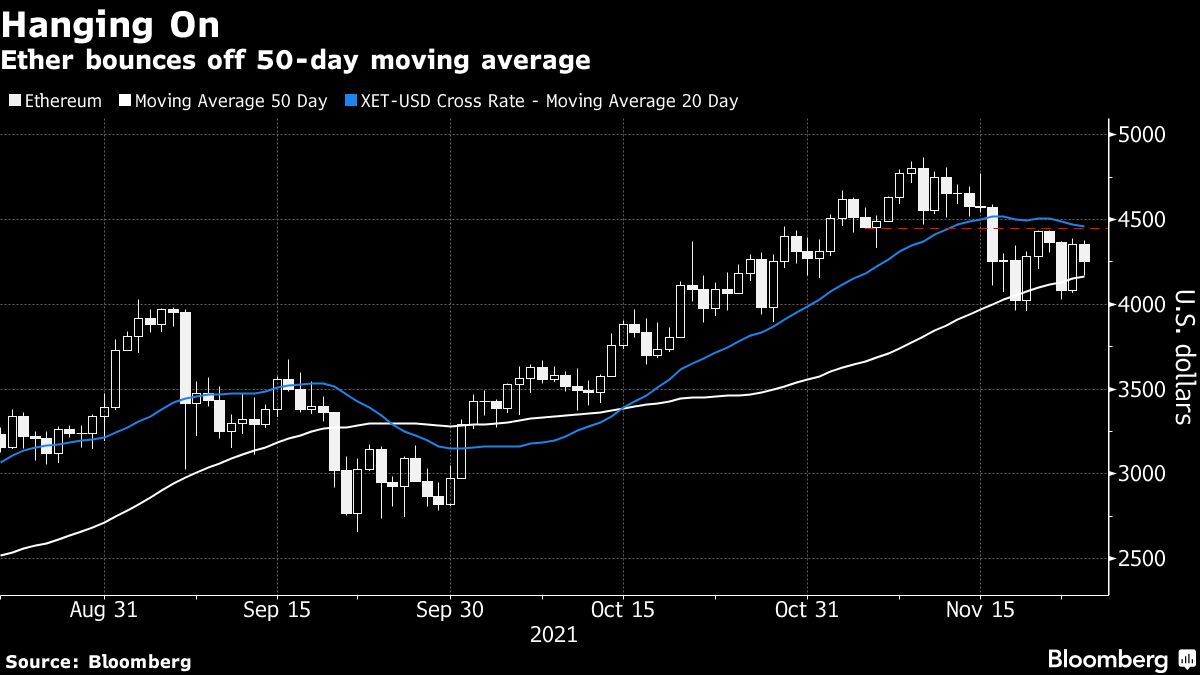 Cryptocurrencies have sold off in recent days amid a number of concerns, including greater regulatory risks as well as many tokens having run up very quickly in a short period of time. The Bloomberg Galaxy Crypto Index, which measures the performance of a handful of the largest tokens, has lost 14% so far this month.

News that India is preparing a bill to regulate cryptocurrencies appears to be behind the latest leg of the selloff in Bitcoin on Wednesday on exchanges popular with Indian investors. Bitcoin was down almost 14% at one point on WazirX while little changed elsewhere.

Some analysts are also citing waning risk appetite in the broader equities market, where profitless technology companies have suffered the brunt of the declines.

“We see Bitcoin come off in valuation when we see a selloff in the more speculative parts of the equity market,” Art Hogan, chief market strategist at National Securities, said by phone.

The important thing is that both Ether and Bitcoin held their lows from last week, according to Matt Maley, chief market strategist for Miller Tabak + Co. “Those lows -- $55,500 on XBT and $4,000 on XET -- are the more important short-term support levels.”

Although Bitcoin has seen a sharp pullback within its intermediate-term uptrend, it is showing signs of short-term downside exhaustion per a number of indicators, according to Katie Stockton, founder and managing partner of Fairlead Strategies, an independent research firm focused on technical analysis. Plus, its oversold conditions increase the probability that it's put a low into place.

“We expect Bitcoin to resume its intermediate-term uptrend, allowing it to ultimately break out above resistance near $65K for a long-term measured move projection of $90K,” she wrote in a note.