The worsening global threat from the virus prompted investors to rapidly step up bets the Federal Reserve would need to cut interest rates as soon as next month.

Global share markets were headed for the worst week since the depths of the 2008 financial crisis as investors ditched risky assets on fears the coronavirus would become a pandemic and derail economic growth.

Asian stocks tracked another overnight plunge in Wall Street's benchmarks on Friday with the markets in China, Japan and South Korea all posting heavy losses.

Hopes that the epidemic that started in China would be over in a few months and economic activity would return to normal have been shattered, as new infections reported around the world now surpass those in China.

The worsening global threat from the virus prompted investors to rapidly step up bets the Federal Reserve would need to cut interest rates as soon as next month to support economic growth.

"We don't even need to wait for economic data to see how badly the economy is being hit. You can tell that the sales of airlines and hotels are already falling by a half or something like that," said Tomoaki Shishido, senior economist at Nomura Securities.

"It is fair to say the impact of the coronavirus will be clearly much bigger than the US-China trade war. So the Fed does not have a reason to take a wait-and-see stance next month," he said.

MSCI's all-country world index fell 0.3 per cent after a 3.3 per cent drop on Thursday. So far this week, it has lost 9.2 per cent, on course for its biggest weekly decline since a 9.8 per cent plunge in November 2008.

It has lost 12 per cent since hitting a record close on February 19, marking its fastest correction ever in just six trading days while the Dow Jones Industrial Average fell 1,190.95 points, its biggest points drop ever.

The CBOE volatility index, often called the "fear index", jumped to 39.16 on Thursday, the highest level in about two years, well out of the 11-20 range of recent months.

The index, which measures expected swings in US shares in the next 30 days, often shoots up to around 50 as bear market selling hits its heaviest although it approached 90 during the 2008-09 financial crisis.

In Asia, MSCI's regional index excluding Japan shed 1.4 per cent. Japan's Nikkei gave up 3.3 per cent on rising fears the Olympics planned in July-August may be called off due to the coronavirus. 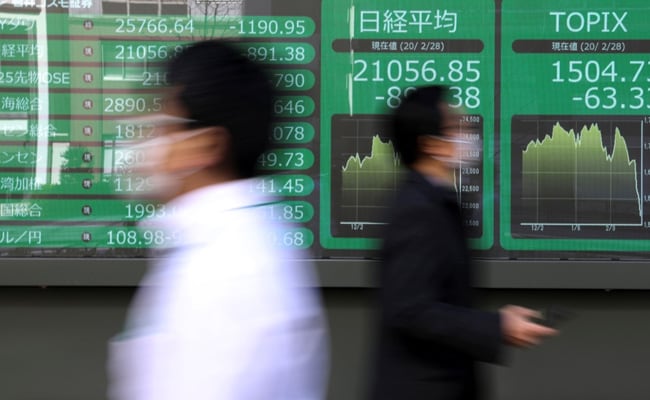 Australian shares dropped 2.8 per cent to a six-month low while South Korean shares shed 2.1 per cent.

"The coronavirus now looks like a pandemic. Markets can cope even if there is big risk as long as we can see the end of the tunnel," said Norihiro Fujito, chief investment strategist at Mitsubishi UFJ Morgan Stanley Securities. "But at the moment, no one can tell how long this will last and how severe it will get."

WHO Director General Tedros Adhanom Ghebreyesus said the virus could become a pandemic as the outbreak spreads to major developed economies such as Germany and France.

The global rout knocked mainland Chinese shares lower, which have been relatively well supported this month, as new coronavirus cases in the country fell and Beijing doled out measures to shore up economic growth.

CSI300 index of Shanghai and Shenzhen shares dropped 2.4 per cent, on track to post its first weekly loss in three.

Fears of a major economic slump sent oil prices to their lowest level in more than a year.

US crude futures fell 1.6 per cent to $46.35 per barrel, having lost 13.2 per cent so far on the week, which would be the deepest fall in more than five years.

As investors flocked to the safety of high-grade bonds, US yields plunged with the benchmark 10-year notes yield hitting a record low of 1.241 per cent. It last stood at 1.274 per cent.

That is well below the three-month bill yield of 1.439 per cent, deepening the so-called inversion of the yield curve. Historically an inverted yield curve is one of the most reliable leading indicators of a US recession.

Expectations the Fed will cut interest rates to cushion the blow are rising in money markets. Analysts say Fed funds futures are now pricing in more than a 50 per cent chance of a 25 basis point cut at the central bank's March 17-18 meeting.

The euro stood at $1.0993, having jumped over 1 per cent in the previous session, the biggest gain in more than two years as investors wound back bets against the currency versus the dollar.