The Centre has spent Rs 5 lakh crore on MGNREGA scheme during the past eight years, Union Finance Minister Nirmala Sitharaman has said. 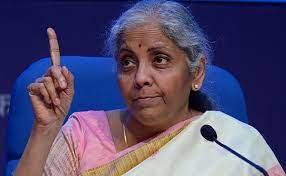 The Centre has spent Rs 5 lakh crore on MGNREGA scheme during the past eight years, out of which 20 per cent was spent during the COVID-19 pandemic, Union Finance Minister Nirmala Sitharaman has said.

Speaking to reports in Kamareddy district of Telangana on Thursday, she said the state was given Rs 20,000 crore under the the Mahatma Gandhi National Rural Employment Guarantee scheme in the past eight years.

"During the past eight years, Telangana received Rs 20,000 crore under MGNREGA. During the same period all over the country Rs 5 lakh crore has been spent, out of which more than 20 per cent was spent in 2020-21 during COVID-19 pandemic," she said replying to a query.

The important issue in this is survey teams will come (to any state) if there are any complaints that the money was not spent accordingly or there are any remarks in the audit report.

Referring to the allegations that survey teams are being sent to curtail the scheme, she said the survey teams will come to correct the anomalies, if any.

During the UPA regime there were several loopholes in the scheme and the government under Prime Minister Narendra Modi corrected them and is implementing it through direct benefit transfer (DBT), she further said.

Slamming the TRS government in Telangana over alleged rising debt, farmers' distress and other issues, the Union minister said the state that used to be revenue surplus, has now gone into revenue deficit.

K Chandrashekar Rao's government was taking loans without showing them in the budget and without informing the state assembly, she claimed.

Farmers' debt is rampant in the state and it is ranked fourth in farmers' suicides, Sitharaman further said.

The minister also accused the TRS government of changing the names of central schemes and projecting them as the state's schemes.

On Thursday, she attended the meeting of district office-bearers, mandal presidents and karyakartas of Zaheerabad Parliamentary Constituency at Kamareddy town as part of 'Lok Sabha Pravas Yojana'.