Recently, a friend came up to me and asked "Raghu, how do I obtain bitcoins?"

I stared at him with an empty, blank look. Despite all the recent talks about bitcoins and their growing popularity, even with the Reserve Bank of India (RBI) getting involved, I realised that I knew absolutely nothing about the bitcoin except the fact that it was associated with the Silk Road - an illegal online black market that used bitcoins as its defacto virtual currency to enable regular folks to obtain all sorts of illegal items easily and anonymously. I had no idea what bitcoins were.

And so I decided to research and write up a column that would explain, in layman's terms, what Bitcoin is.

First of all, there is a difference between the terms 'Bitcoin' and 'bitcoin'. Bitcoin, where the "b" is capitalised, refers to the entire system itself. It's like learning a language e.g., "I learned Spanish today." On the other hand, bitcoins, where the "b" is not capitalised, refers to the actual currency itself. You could say "I spent 10 bitcoins to purchase this item."

Bitcoins is a form of virtual currency- meaning, if you have bitcoins (we will get to how you obtain bitcoins later), you do not physically purchase goods by handing notes or tokens to the seller. Bitcoins are used for electronic purchases and transfers. You can use bitcoins to pay friends, merchants, etc. Every single purchase is immediately logged digitally (on computers) on a transaction log that tracks the time of purchase and who owns how many bitcoins. Think of this transaction log as an audit trail: it contains every single piece of information of every bitcoin transaction. This digital transaction log is called 'blockchain'.

The blockchain records every single transaction - of present and past - and the ownership of every single bitcoin in circulation. The people who are constantly verifying the blockchain, ensuring that all the information is correct and updating it each time a transaction is made, are called 'miners'. One way to think of miners is: they those who confirm transactions. Their job is to ensure that the transaction is secure and processed properly and safely. In return for their services, miners are paid fees by the vendors/merchants of each transaction and are also given physical, minted bitcoins.

Bitcoins are growing in popularity, and although they were largely used by speculators who were looking at it as a way to make money by buying bitcoins at lower prices and selling them at higher prices (much like trading foreign exchange or forex), there is a growing trend of businesses accepting Bitcoin as a form of payment. Many big companies like WordPress, Overstock.com, and Reddit accept Bitcoin, and a growing numbers of brick and mortar stores are starting to accept them internationally as well. More than $1.5 billion worth of bitcoins are currently in circulation around the world, with millions of transactions occurring daily. Needless to say, the popularity and usage of Bitcoin is picking up very quickly as more and more businesses and individuals are becoming aware of its benefits and advantages over traditional currencies.

How are bitcoins priced?

Bitcoins are like any other currency: they fluctuate in value relative to other currencies. Similar to how the rupee's valuation swung wildly against the US dollar this year, bitcoins have had drastic movements in price as well.

The value of a bitcoin is constantly changing, and there is no centralised exchange for it. Think of it this way: each time a bitcoin changes ownership from seller to buyer, the two parties need to agree on its price. There is no 'fixed' price. Usually, it's the seller's responsibility to give a fair price to the buyer based on what rate bitcoins are being traded in elsewhere. The difference between bitcoins and other currencies is that there is no centralised bank that prints the currency and sets relative values. Through transactions, the value of bitcoin fluctuates through supply and demand.

Here's a graph covering few months of the relative value of bitcoins against US dollars; as you can see, there have been wild fluctuations in the value over the past two months. 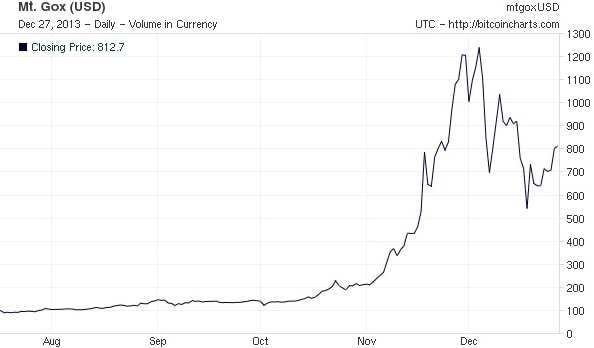 What's the point of having bitcoins if I can use regular currency for my purchases?

That's a question you're bound to ask yourself at some point in time; after all, the rupee seems to get the job done. Why add complexity to your life with 'virtual currency' that the RBI seems to want to get rid of?

Well, for starters, there are many benefits to bitcoins over traditional currencies. For example, let's assume you need to purchase an item for Rs. 10,000, but the seller doesn't accept credit cards or bitcoins; he only wants cash. You now need to scrounge around for Rs.10,000 and pay the seller in hard cash; the seller, on his side, has to somehow ensure that the money you're giving him is not counterfeit. Just the hassle of having to pay him Rs. 10,000 in cash is what Bitcoin prevents. If you have at least Rs. 10,000 worth of bitcoins (after converting rupees to bitcoins) and the seller accepts bitcoins, the entire transaction is completed in less than 10 minutes - hassle free.

What it basically comes down to is this: if the buyer and seller agree on a said amount for a good or service, using bitcoins gives them full control and transparency. There are no credit limits imposed by credit card companies, no need to carry cash, no extra fees that the seller can impose upon the buyer without the buyer's full approval. Every single transaction has to be 'agreed' to by both parties before it goes through.

The greatest advantage, however, is that all necessary information is public and transparent. Without revealing the identities of the buyer and seller, the entire bitcoin network is made aware of each and every transaction. This gives a tremendous amount of comfort to both parties of the transaction.

How do I get started?

You can obtain bitcoins in a number of ways, but before we get to that, you'll need to get yourself a 'Bitcoin wallet'.

A Bitcoin wallet is first required to get started with using bitcoins. A wallet can be created easily through different online applications. Your Bitcoin wallet is essentially just like, well, any other wallet.

Think of a Bitcoin wallet like an "app" that you would install on your phone. You can download your wallet on your computer through a software wallet, on your mobile, and also on the web. Once you've got yourself a Bitcoin wallet, you're good to go. It takes just a few minutes to get a wallet; once you have one, you can start accumulating bitcoins.

How do I get bitcoins?

Obtaining bitcoins is a relatively easy process. The three common ways are:

As written above, obtaining bitcoins through an exchange is the most common and feasible way to get started. There are hundreds of exchanges (mostly online) through which you can obtain bitcoins. You simply register, enter your bank account information, and convert the local currency into bitcoins. In fact, there is an easy way for you to find an online exchange based on where you live through this website.

What do I do with my bitcoins? How do I know that what I'm buying is safe?

Although many brick-and-mortar businesses are starting to accept Bitcoin, the large majority of transactions occur online. You can think of bitcoins as 'cash' for the internet.

Making payments with bitcoins is an incredibly easy process; in fact, you could argue that it is much easier than using credit cards. All you need to do is, using your Bitcoin wallet:

The recipient will then simply receive the request for bitcoins in exchange for what he is offering (goods, services, or perhaps a currency).

Bitcoin works off addresses. There are two components to a Bitcoin address: a public address, and a private address. Each Bitcoin address has its own Bitcoin balance. Every time a transaction is made, the public address of each user is made public to the entire network. Therefore, it is recommended that the sender creates a new address for each transaction.

Here is an example of a Bitcoin transaction:

Here's an example of what it might look like on Rajiv's software when he sends his bitcoins to Snehal: A bitcoin user can freely share his public address with everybody. His private address, however, is only for him to know. This is critical in that this is what allows Bitcoin to be a secure payment system.

As Bitcoin gains popularity, governments are slowly but surely starting to take stances against/for it. For instance, the RBI issued a vague warning last week that Bitcoin usage is unsafe due to potential money laundering and cyber security risks. The government of China took it one step further by barring financial institutions and payment institutions from accepting bitcoins as a form of payment. Governments are cracking down on "black markets" that accept bitcoins as a form of payment.

In India, it's not very easy to convert rupees to other currencies since the Indian currency is not freely convertible. Due to this hindrance, obtaining bitcoins is not as hassle free as it is in other countries. Another problem with obtaining bitcoins in India is that there is electronic method to transfer funds safely; most transfers happen through NEFT. Due to these hindrances, liquidity of bitcoins is relatively scarce in India, but is picking up.

That being said, Bitcoin isn't an institution, organisation, or any sort of centralised entity. In fact, the beauty of Bitcoin is that there is no central authority. It is literally a network of users - known as "peers" - who simply decide to buy and sell goods and services through a mode of virtual currency. It will be difficult for governments to 'shut down' Bitcoin. In fact, there are talks that virtual currencies are the wave of the future to do their inherent associations of being decentralized, transparent, secure and hassle free.

The RBI has taken notice of Bitcoin but has not outlawed it. As Mark Twain popularly said, "The more things are forbidden, the more popular they become."

Promoted
Listen to the latest songs, only on JioSaavn.com
We can only expect Bitcoin's meteoric rise in popularity to continue.