Cryptocurrencies, regardless of where they're trading today, will eventually prove to be worthless; once the exuberance wears off, or liquidity dries up, they will go to zero, John Paulson said 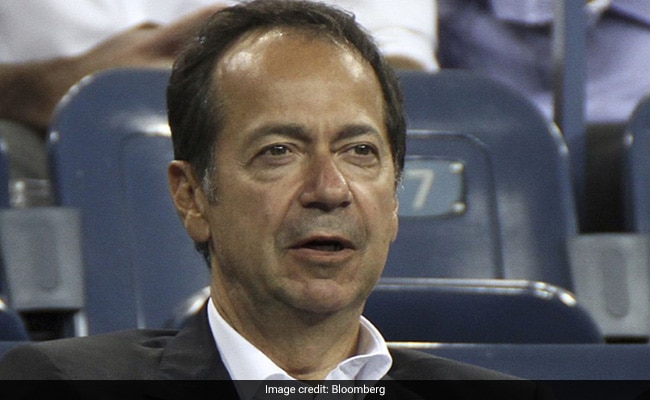 Ever since John Paulson bet against the U.S. housing market more than a decade ago, people keep asking him about his next big trade. The billionaire hasn't found anything to rival his massive short, but it's hard to top the $20 billion that Mr Paulson made for himself and investors when subprime mortgage bonds collapsed and ignited the worst financial crisis since the Great Depression.

Mr Paulson, 65, is increasingly concerned about rising prices, he said in an episode of "Bloomberg Wealth with David Rubenstein." The rapidly expanding money supply could push inflation rates well above current expectations, he said, and gold, which he's backed for years, is primed for its moment.

His harshest words are for the hottest investments of this era. SPACs, on average, will be a losing proposition, while cryptocurrencies are a bubble that will "eventually prove to be worthless."

Mr Paulson's dismissal is sure to attract critics after digital assets vastly outperformed gold in recent years. His record since the "greatest trade" has also been mixed. He turned his hedge fund firm into a family office last year after assets dropped to about $9 billion in 2019 from a peak of $38 billion in 2011 and he found himself managing mostly his own money.

Mr Paulson said he much prefers to focus these days on investing and doesn't miss the stress of running a business. "I was never fond of raising money or going to meet investors," Mr Paulson said.

Investing is what he largely wanted to do since attending a course at New York University taught by former Goldman Sachs Chairman Gustave Levy. After Harvard Business School, Mr Paulson's first job was with Boston Consulting Group, but he soon switched to work for Odyssey Partners, then mergers and acquisitions for Bear Stearns & Co. He opened Paulson & Co. in 1994 and the New York-based firm was best known for risk arbitrage until that moment when he realized the U.S. housing market could be a house of cards.

Mr Paulson also spoke about his upbringing in New York, how he constructs his trades, where he'd put $100,000 today and the best investment advice he ever received. The interview has been edited and condensed.

The subprime trade was more than 10 years ago. Have you or anybody else come up with something quite as good as that?

I haven't found anything that's as asymmetrical as that particular trade. Asymmetrical meaning you could lose a little bit on the downside, but make essentially 100 times on the upside. Most trades are symmetrical. You could make a lot, but you risk a lot. And if you're wrong, it hurts.

But the area that's most mispriced today is credit. You have current inflation that's well in excess of long-term yields and there's a perception in the market that this is transitory. I think they bought the federal line that it's just temporary, due to the restart of the economy and that it's eventually going to subside. However, if it doesn't subside, or it subsides at a level that's above the 2 per cent that the Fed is targeting, then ultimately interest rates will catch up and bonds will fall. In that scenario, there are various option strategies related to bonds and interest rates that could offer very high returns.

After you made your famous trade, you bought a lot of gold, or gold futures, and you were called by some a gold bug. Gold's now about $1,700 an ounce. Do you think that gold is a good investment at this price?

Yeah, we do. We believe that gold does very well in times of inflation. The last time gold went parabolic was in the 1970s, when we had two years of double-digit inflation.

The reason why gold goes parabolic is that basically there's a very limited amount of investable gold. It's on the order of several trillion dollars, while the total amount of financial assets is closer to $200 trillion. So as inflation picks up, people try and get out of fixed income. They try and get out of cash. And the logical place to go is gold. But because the amount of money trying to move out of cash and fixed income dwarfs the amount of investable gold, the supply and demand imbalance causes gold to rise.

So you're a big believer in gold as a good investment now?

Yes. We thought in 2009 with the Fed doing quantitative easing, which is essentially printing money, it would lead to inflation. But what happened was while the Fed printed money, at the same time they raised the capital and reserve requirements in banks.

What about cryptocurrencies? Are you a believer?

No, I'm not. And I would say that cryptocurrencies are a bubble. I would describe them as a limited supply of nothing. So to the extent there's more demand than the limited supply, the price would go up. But to the extent the demand falls, then the price would go down. There's no intrinsic value to any of the cryptocurrencies except that there's a limited amount.

Cryptocurrencies, regardless of where they're trading today, will eventually prove to be worthless. Once the exuberance wears off, or liquidity dries up, they will go to zero. I wouldn't recommend anyone invest in cryptocurrencies.

Based on what you've just said, why not put a big short of some type on cryptocurrencies?

The reason we shorted subprime in size was because it was asymmetrical - shorting a bond at par that has a limited duration that trades at a 1 per cent spread of Treasuries. So you can't lose more than the spread in the duration. In crypto, there's unlimited downside. So even though I could be right over the long term, in the short term, I'd be wiped out. In the case of Bitcoin, it went from $5,000 to $45,000. It's just too volatile to short.

Have they kept it artificially low? Yes. Have they kept it artificially low too long? I don't think so. We went through probably the worst financial crisis imaginable with Covid in which the entire economy shut down. If it wasn't for the very aggressive policies of the Fed and the Treasury, we could have delved into a deep recession. By providing all the monetary and fiscal stimulus, they really minimized the downturn and it resulted in a very rapid recovery.

If somebody came to you and asked how they should invest $100,000, what would you tell them?

I always say the best investment for an average individual is to buy their own home. So if you take that $100,000, put 10 per cent down, get a $900,000 mortgage, you can buy a home for a $1 million. It was just reported that home prices were up 20 per cent in the last month. So if you bought a home for a $1 million with $100,000 down and the home was up 20 per cent, that's $200,000 on a $100,000 investment. The longer you wait, the more the house is going to appreciate and the greater return you'll have on your equity investment. So I think the single best investment for anyone with that type of money would be to buy their own house or apartment.

Let's talk about what you've been doing lately. You had this big hedge fund, but then you decided to do what many people have done who've been successful on Wall Street and put it into a family office. Any regrets about not having bigger sums of money now?

I never really liked the the business side of the business. I was never fond of raising money or going to meet investors. I found that very stressful. I did like the investing side. That's that's what I found interesting.

And over time, my capital in the fund became a larger and larger portion of the assets under management. Ultimately I decided that I was spending too much time on managing the business, over half my time, which really wasn't producing incremental returns over the cost. And I decided to just focus on investing.

No. I've tried to make my life simpler by returning outside capital. That was a big move because now I don't have to write investor reports or travel to meet with investors or worry about balancing funds or other people's tax issues and things like that. So that's allowed me just to concentrate on investing, which I like doing.

You've bought some other things in the last number of years. One of them is Steinway Piano. Are you a pianist yourself?

I'm not, but both my sisters are concert pianists and my father's an opera lover. So I grew up with classical music and I always felt that a home is not a home without a piano. When I got my first apartment, I bought a Steinway grand. I moved seven times after I graduated and always took that piano with me. When my first child was three we put her on the piano. At that point it was quite beaten up so we went to Steinway Hall and bought a new one and I was just amazed at the quality. I said to myself, "You know, this is one company, if it ever was for sale, I would consider buying."

Lo and behold, one day I open the Wall Street Journal and Steinway was under contract to be sold to Kohlberg. But there was a 45-day go shop. So we expressed our indication of interest and bought the company.

And you never been tempted to learn how to play the piano?

No. It's too difficult. But I've learned a lot more about music and appreciate it a great deal more than I did before.