Foreign investors have turned net buyers for seven days this month, even as the rupee languishes near its lifetime low of around 80 per dollar. 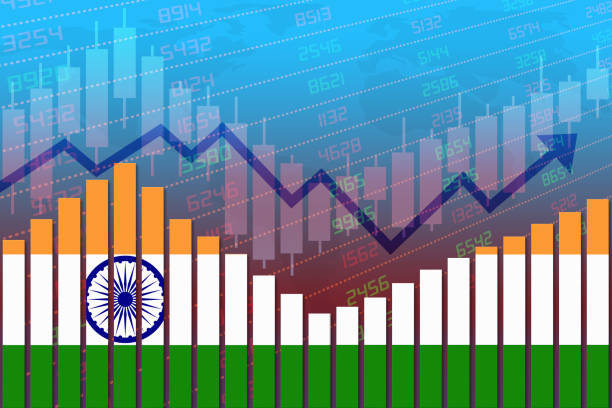 Foreign investors have turned net buyers of Indian assets for seven days this month, even as the rupee languishes near its lifetime low of around 80 per dollar.

International investors have been net sellers persistently since October last year, pulling a record amount of money out of Indian capital markets.

While foreign investors remain net sellers overall this month, they have pumped money into Indian capital markets for seven days this month which marks the most number of days since January, according to data from National Securities Depository Limited (NSDL): see the chart below.

The recent international investors' sentiment in favour of Indian assets could be a reversal of a deep sell-off in Indian equities, and many experts point to that pattern as a turning point for markets. 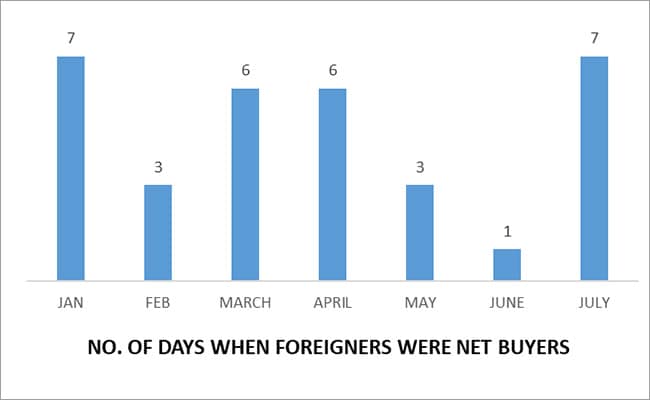 "This gives us a positive signal that things may not be that bad for foreign investments in equity markets," said Madan Sabnavis, Chief Economist at Bank of Baroda.

"If this trend continues, it could be a turning point for the equity markets; it would also help the rupee as foreign outflows pulling out money has been dragging rupee," he added.

The government's move to slash windfall taxes on crude and fuel exports also boosted investors' sentiment. Index heavyweight Reliance Industries and other energy stocks benefitted from the move and jumped.

Mid- and small-cap shares finished on a strong note too.

Twelve of the 15 sector NSE gauges -- compiled by the National Stock Exchange -- settled in the green. Sub-indexes Nifty IT, Nifty FMCG and Nifty Oil & Gas, outperformed the NSE platform by rising as much as 2.93 per cent, 1.13 per cent and 1.02 per cent, respectively.

The overall market breadth stood positive as 1,926 shares advanced while 1,429 declined on BSE.

Still, the rupee held at its lifetime lows of around 80 per dollar even as the greenback has fallen over 1 per cent in the last three sessions.

"Overall gains in crude in the last few days where Brent has risen again above $105 and lack of intervention from the RBI has kept the rupee hovering around 80.00. Going ahead, the rupee will be seen in the range of 79.75-80.25," Jateen Trivedi, VP Research Analyst at LKP Securities, told PTI.

Against the basket of major currencies in the dollar index, the greenback was flat on the day at around 106.6, well off its two-decade peak of 109.29 last week.

Global stocks rallied, the US dollar lost steam, and the euro breathed a sigh of relief and extended its overnight bounce on relief Europe might be able to avoid the worst fears concerning energy shortages.

The rupee, though, could not break free and gain significantly, and instead, Bloomberg quoted the rupee lower at 79.9899, a day after hitting an all-time low of 80.06 against the dollar.

That comes a day after the Indian currency breached the 80-to-a-dollar mark for the first time ever.

Reuters reported that the Indian rupee was held below the 80-per-dollar mark, aided by the central bank's dollar-selling intervention, while gains in the domestic share market and a fall in global crude oil prices also helped.

Markets have pared expectations of a 100 basis points US interest rate rise next week and now see a 23 per cent probability of such a move after policymakers poured cold water on it.

In turn, that has lowered the risk of sharp global recession expected after predictions for an aggressive Fed policy path red-hot US inflation data.

Peter Kinsella, global head of FX strategy at asset manager UBP, told Reuters that on a valuation basis, the euro was cheap and the dollar expensive, implying room for turnaround.

But he noted an ongoing "waiting game with three big risks: the gas shutdown, China's zero-COVID policy and whether the world can avoid economic recession".