SOL is the coin that runs on the Solana network. Solana is a platform for decentralised finance applications and other smart contracts 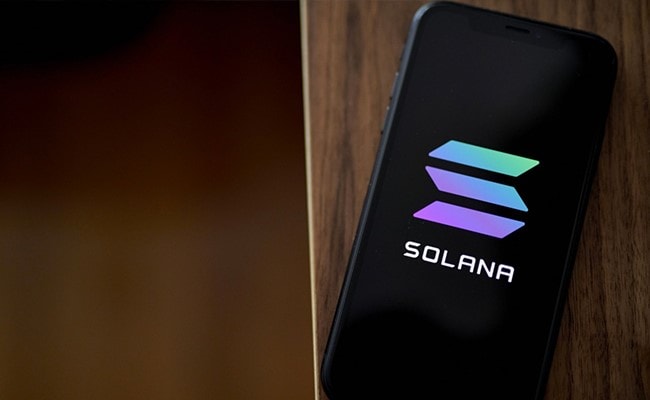 SOL is a cryptocurrency that runs on the Solana blockchain

You know Bitcoin. Odds are you've heard of Ethereum. And even if you just watched TV at some point this year, there's a good chance you're familiar with Dogecoin, too.

But what about SOL? A lesser-known coin is having a moment during a frenetic time in the ascent of cryptocurrencies — shooting up the charts to solidify its place in the top 10 cryptocurrencies of late. It was up some 28 per cent in the seven days leading to April 4 at a time when Bitcoin's price was flatlining after having jumped about 40 per cent from a January low.

SOL, a cryptocurrency that runs on the Solana blockchain, is being talked about as a potential long-term competitor with Ethereum. That's because it's more than just a coin: Solana and Ethereum have both developed support among coder communities, who have built functions like smart contracts and NFTs on the platforms. Evangelists hold regular meetups from San Diego to Hong Kong.

Solana's recent jump may be tied to the popularity of a Solana-based, fitness-related app called STEPN and moves to include NFTs from its blockchain on OpeanSea, a major marketplace for the digital collectibles, according to Jonathan Cheesman of crypto-derivatives exchange FTX.

Compared with other dominant coins, Solana is relatively young. The idea for Solana was first published in 2017 by developer Anatoly Yakovenko, and SOL debuted last year and its value surged in the late summer.

“Ethereum is playing catch up here,” said Ed Moya, senior market analyst at Oanda. “They will get their transaction speeds up but their costs are still going to be much more than Solana.”

But it hasn't been entirely smooth sailing for Solana. In September, a brutal outage disrupted transactions for 17 hours. Some questioned the network's ability to grow, while Bitcoin and Ethereum diehards saw it as proof of the benefits of sticking with more established crypto projects. Supporters said this was a bout of growing pains.

In this wildly competitive hunt for the next big thing, SOL has stood out. Thousands of new coins have flooded the crypto space — the vast majority of which don't have the functionality or depth of the big coins like SOL — though new projects, new promotions and new investors popping up daily.

What exactly is SOL?

SOL is the coin that runs on the Solana network. Solana is a platform for decentralized finance applications and other smart contracts. On it, people can borrow, trade, lend and leverage crypto assets. SOL has been soaring on the promise that unlike Ethereum, its main competitor, transactions on Solana will be cheap and ultrafast. In other words, the project is rejecting the premise that blockchains have to be costly, slow and inefficient. On that potential, the coin has seen its value jump roughly 488 per cent over the past year.

How is SOL doing?

As of early April, SOL had taken over as the sixth-largest cryptocurrency by market cap, with a value of around $44 billion, according to CoinMarketCap data. That's well below Bitcoin's roughly $877 billion market value. It's also below second-place Ethereum's approximate $418 billion. But SOL typically sits above other alt-coin favorites, such as Cardano or Litecoin, as well as the non-utility players like Dogecoin and Shiba Inu, yet another dog-related coin with links to Elon Musk.

What's the case for buying?

If you like smart contracts: Charts comparing cryptocurrencies by market value can be misleading. That's in part because crypto networks have such different use cases. Paul Veradittakit, a partner at Menlo Park, California-based Pantera Capital, breaks crypto projects down into a few different categories.

Mr Veradittakit groups the Solana network in with Ethereum, which has a strong focus on letting people create computer applications inside its system. Users can set up so-called smart contracts that, for instance, automatically issue payments and share data at pre-set times as certain terms are met.

“Right now I'd say Solana is the top competition in terms of developer adoption and momentum compared with any of the smart contract platforms,” Mr Veradittakit said.

Bitcoin, on the other hand, he thinks of as a store of value and potentially a currency. Consumers in emerging markets may eventually prefer using Bitcoin to their local currencies because the crypto — volatile as it has been — may be more stable, he said.

If you have a need for speed: Solana bills itself as the world's fastest blockchain. “What you're starting to see is, because Ethereum is so secure, it takes a lot longer to process,” Moya said. “That's why everyone is for the most part excited that you have Solana.”

If you're cost sensitive: Solana is not just fast, it's also cheaper than many of its competitors. The network's backers say the average cost per transaction is $0.00025. These fees — “gas fees” in crypto lingo — are paid to miners for each transaction on a blockchain network.

Lower costs mean that Solana might be better suited to gamers or people who want to buy smaller-value items, or fractions of NFTs, Mr Veradittakit said.

“We're seeing a ton of NFT and gaming use cases,” he said. “With gaming, you have a younger audience. They're maybe not spending as much money, but there's a lot of transactions that can be happening because of the rapid game play.”

That is why many investors are on the hunt for other coins with potential that are trading at lower prices. The thesis is that if they pick the next Bitcoin, they'll see massive returns.

“You want to hold a basket of cryptocurrencies,” Mr Moya said. “Solana, it's skyrocketed this year. There's still this belief that you still have a lot more potential upside, and possibly outperform Bitcoin and Ethereum in the short term, so that's why you're having all this bullish momentum here.”

If community counts: One of the underappreciated aspects of social media's role in cryptocurrency is the importance of community. Reddit and Twitter users famously rally behind their favorite coins during bearish moments. But digital communities are also important because they encourage use and adoption of blockchains — the technology coins such as SOL run on.

According to Veradittakit, Solana makes it easy for developers to bring their projects from Ethereum to its network. In a competitive landscape, that could help broaden the appeal of Solana.

...and what are reasons to steer clear?

Of course, there are reasons to be bullish on Ethereum over its faster and cheaper competitors. The blockchain has established itself as the leader in the space. It's the most-used network for applications in decentralized finance and digital collectibles. The most popular NFT projects are there and so is most of the developer base. Breaking in will be Solana's main test.

If you can't ignore a big outage: Solana blockchain came under scrutiny after the network suffered a major outrage of more than 17 hours in September. The network simply couldn't process any transactions and the people behind its blockchain later blamed something called “resource exhaustion.”

While any massively growing technology is bound to run into bandwidth constraints, the outage provided an opening for critics of the fast-growing network. This was a red flag: The coin's value could become a rollercoaster if outages become a common occurrence.

“I'm worried that they are still in the show-me phase, they still have things to prove,” said Matt Maley, chief market strategist at Miller Tabak. “There is obviously more risk involved.”

If you see adaptations around the corner: Ethereum is also trying to test its scalability by building out its own so-called Layer 2 solutions, which allow for fast transactions to be done off chain, then later settled on the chain itself. This could mess with Solana's plans to crack into the industry, because it would address Ethereum's speed disadvantage and prevent scenarios where trading fees soar every time there's a hot new NFT or significant volatility. The competition for the network that will provide the fastest and cheapest transactions for investors in up for grabs.

“Everyone knows that scalability is what the market wants, so there's going to be fierce competitions to bring up your transaction speed and we'll be seeing upgrades across all these blockchain,” Moya said. “Investors are going to be a little bit concerned about who is rushing and who is making sure that their platform is able to handle it.”

If regulation worries you: President Joe Biden signed an executive order in March 2022 directing government agencies to focus more on cryptocurrencies, but it fell short of providing clear guidance on future regulation. The directive calls for studies and policy recommendations on issues ranging from a digital U.S. dollar to combating illicit finance.

Securities and Exchange Commission Chair Gary Gensler has previously labeled crypto as the “Wild West” and signaled that he wants more robust oversight of the markets. Government interference could lead to price drops, some experts warn. Earlier this year, Ray Dalio, founder of Bridgewater Associates, said he foresees regulators taking control of bitcoin if there's mainstream success for the cryptocurrency.

“They will try to kill it,” Dalio said in an interview during the SALT conference in September. “And I think they will kill it because they have ways of killing it.”

If you have questions about decentralization: Solana is not fully decentralized yet. For a blockchain to function, it needs computers all over the world to validate its transactions.

“Ethereum has not had any downtime. They are the gold star here,” Mr Moya said. “You're probably going to see that a lot of investors are going to be very skeptical.”

Mike Novogratz, a big supporter of SOL, has said one of the main questions is whether regulators will allow business infrastructure to be build on a blockchain that is not nearly as decentralized as it should be.