One NFT for sale will represent an animated piece showing degradation and restoration of a panel of scrafitto of Hercules on a wall of the Nelahozeves Castle, one of the familys four properties in or around Prague. 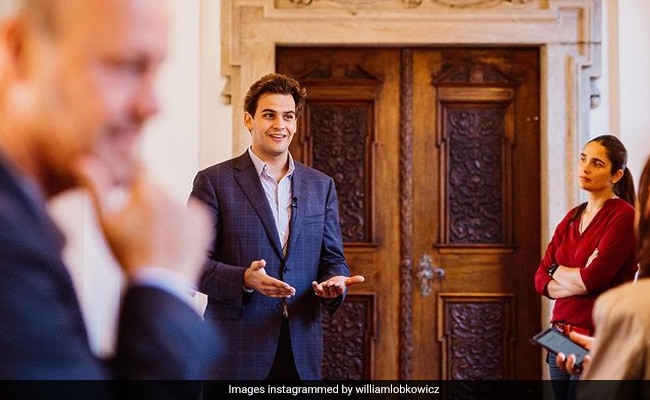 A 600-year-old Bohemian noble family is embracing the latest craze sweeping the crypto and art worlds, hoping that NFTs will help pay for the restoration of its artwork collection and an ancestral castle.

The Czech Republic's Lobkowicz family — which once sponsored Beethoven, lost everything to the Nazis and Communists and then reclaimed their castles and artwork in the 1990s after the fall of communism — will auction a slew of non-fungible tokens and host a conference next month in Prague at the Lobkowicz Palace, from which you can see the entire city.

“We don't get any public funding,” said William Rudolf Lobkowicz, the 27-year-old prince who was born in Boston but raised in the Czech Republic. “My father sometimes says we are the richest poor people in the world. We are going to showcase some pieces that are in desperate need of restoration.”

The family is hoping to grab hold of a trend that has exploded over the past year, where digital certificates that serve as proof of ownership of something — physical or digital — have sold for millions of dollars. One NFT for sale will represent an animated piece showing degradation and restoration of a panel of scrafitto of Hercules on a wall of the Nelahozeves Castle, one of the family's four properties in or around Prague.

In the 1990s, the family eventually got its castles back, plus a collection of 20,000 artifacts, including works by Bruegel, Canaletto, and Velázquez, as well as hand-annotated manuscripts by Mozart and Beethoven. Because they are considered to be national cultural treasures, the pieces can't be sold without the government's permission or leave the country. So the Lobkowicz family has financed taking care of the collection in large part through tourism and events. Some 100,000 people a year visit the collection.

But the pandemic put all that on pause. Instead, Lobkowicz drummed up interest through free events, such as digital tours of the collection every Sunday, attracting about 130,000 people in a year. He organized virtual yoga classes in some of the castle's historical places.

Now he is trying out NFTs, which have turned into a huge market in the past year. Daily NFT sales peaked at $268 million in late August, according to tracker NonFungible.

Lobkowicz, whose title is director of digital media and innovation, says they are trying to gin up interest and stay relevant, exploring a new type of fundraising. “That's how we are going to stay around for another 600 years,” he said in an interview. “I can see NFTs as a new frontier.”

This will kick off with a one-day, invitation-only conference called Non-Fungible Castle. It costs 400 euro to attend — payable in crypto, of course — and will explore themes around NFTs, such as whether the whole craze is a scam. Titles of scheduled panel discussions include “NFTs: Nothing F**king There?” and “What Are You Really Buying?”

People will also be able to purchase blockchain-based proofs that they contributed to restoring certain items within the private collection. Several artists will sell NFTs with half of the proceeds going towards restoration.

While studying history at Harvard University, Lobkowicz began dabbling in Bitcoin, Ethereum and Litecoin. Since then, he also purchased four NFTs — not the expensive ones, he says — and invested in the cryptocurrency Cardano. He lives in an apartment and takes a tram to work every morning. He also worked his way up the family's corporate ladder, initially selling ice cream, cleaning and even giving castle tours.

Lobkowicz says he's looking to create the same kind of buzz around the collection, long term, as he sees around CryptoPunks — digital avatars that have traded for millions of dollars.

“It's a way to connect younger audiences to collection,” he said.