Woman Falls Off A Cliff, Survives 7 Days "Trapped" On A Secluded Beach

She doesn't remember hitting her head, fracturing ribs and collar bone or losing air from one of her lungs but does remember waking up in her SUV. 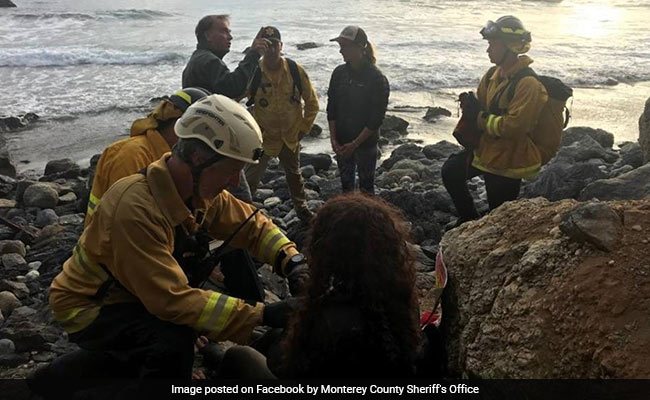 Angela Hernandez getting rescued by the authorities seven days after falling off the cliff.

Angela Hernandez does not remember much about the accident - plummeting down an oceanside cliff in central California.

She does not remember hitting her head, fracturing ribs and her collar bone or losing air from one of her lungs. But the 23-year-old from Portland, Oregon, does remember waking up trapped in her SUV in the Pacific Ocean and the seven long days that she fought to survive. The account comes from Facebook, where a user matching Hernandez's name posted pictures of the accident, and her injuries and recollections.

"The past week has been unlike anything I've ever experienced in my entire life," Hernandez wrote in a Facebook post over the weekend.

Hernandez wrote in the Facebook post that she was driving July 6 through the Big Sur area on her way to Southern California when she saw a small animal on the highway and swerved to miss it. She veered off the edge of a cliff, police said, and crashed about 200 feet below, where the ocean meets a rocky beach that is largely isolated from those driving above it.

"The only thing I really remember after that was waking up," she wrote. "I was still in my car and I could feel water rising over my knees. My head hurt and when I touched it, I found blood on my hands."

She said her windows were rolled up, and the power was out.

"I took off my seat belt and found a multi-tool I kept near my front seat," she wrote in the post. "I started hitting the driver-side window with it. Every bone in my body hurt."

"When I woke up, it was still daylight and it was only then that I had finally realized what had happened," she wrote. "I stood up onto my feet and noticed a huge pain in my shoulders, hips, back, and thighs. I saw nothing but rocks, the ocean, and a cliff that I knew I'd never be able to look over. I could see my car not too far from me, half washed up on shore with the roof ripped off of it."

The next several days were no doubt a nightmare.

Hernandez said that she had no shoes - only socks that had become ridden with holes and jeans that were ripped to shreds - so she avoided the prickly sand, stepping instead across the sun-baked rocks as she searched the shore for help.

She survived, she said, using a hose from her car to catch water dripping from moss on rocks. 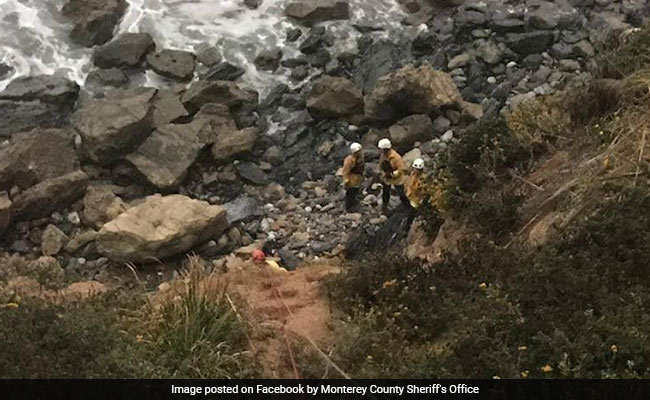 Hernandez was driving through the Big Sur area when she saw an animal on the highway and swerved to miss it, veered off the edge of a cliff.

Up above, authorities were searching for Hernandez, who had been reported missing while traveling from Oregon to California, police said. The Monterey County Sheriff's Office said in a statement that Hernandez had last been seen on surveillance July 6, driving her white 2011 Jeep down Highway 1 in the Big Sur area. John Thornburg, a public information officer for the sheriff's office, told The Washington Post on Monday that the heavy fog from the coast may have made it more difficult for first responders to spot her and the wreckage.

But down below, Hernandez was there. She said she spent her days watching cars on the road - but no one seemed to see her, and they were probably too far to hear her screams for help. "I could see cars driving across the cliff and felt like if I could yell just loud enough, that one could hear or see me," she wrote. "That's all it would take to make it back to my family. Just one person noticing me."

At night, she slept - and dreamed about being rescued. She said she even "imagined the face of the person who would eventually find me."

But it would be two faces - Chad and Chelsea Moore. The hikers were scouting out a spot for some fishing Friday when they saw a car bumper - then a crumbled car, according to CBS affiliate KION.

"There weren't any signs of people or blood or anything," Chelsea Moore told the station, but said to be sure, her husband went searching for bodies. "It looked like there wouldn't have been any survivors."

The couple walked up the beach, collecting items that had spilled from Hernandez's car - and that's when they found her hidden in the rocks.

"Angela was right there in the rocks, just looked like hell," Chad Moore told the station. "But she was happy at the same time. She was happy to see us. We asked her, 'Were you in the Jeep?' and she said, 'That was my Jeep.' "

"And at that point, we just kind of like panicked," Chelsea Moore added. "Like 'Oh my god, you were in that car we just saw and you're alive.' "

Hernandez said that when she saw the couple, she first thought it was merely another dream.

"I screamed, "HEEELLLPPPPP!" and then got up as quickly as I could and ran over to her. She was with a man and I don't think they could believe their eyes," she wrote on Facebook. "They acted so quickly. She ran down the beach and up a trail to go find help while the man stayed with me and gave me fresh water. He told me they were a married couple who loved the ocean and had been exploring when they had come across my destroyed vehicle."

The Monterey County Sheriff's Office said in a statement Friday that Hernandez had been found "by two people walking in the area, who called 911." Her vehicle, police said, "was partially in the water."

First responders roped down to Hernandez, treated her and then hauled her back up from the beach, authorities said. She was transported to a nearby hospital and treated for her injuries.

Hernandez wrote on Facebook that doctors later told her that she had suffered a brain hemorrhage, fractured four ribs and her collarbone, and that she had a collapsed lung and ruptured blood vessels in both eyes, among other injuries.

It's a sentiment that the couple shares.

"I can't believe you're alive, Angela," Chad Moore added. "You're a hero. That's unreal. You made it."

(Except for the headline, this story has not been edited by NDTV staff and is published from a syndicated feed.)
Comments
Angela HernandezCalifornia Cliff AccidentCar Accident in California