Voters Allege Being Barred From Polling Booths In Bangladesh

At least 3 voters in Bangladesh, including a journalist, were told their ballot papers had already been filled in and were barred from entering booths 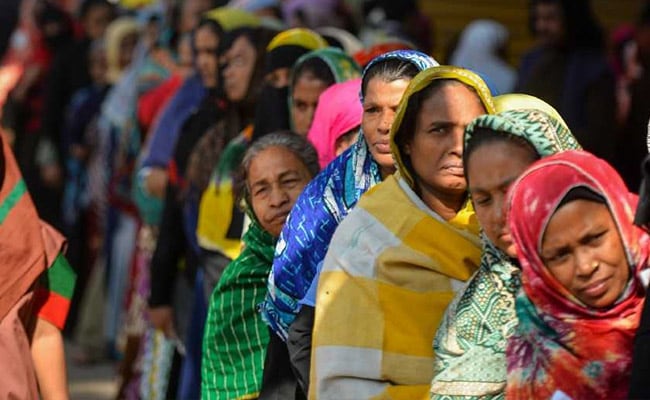 Election Commission said it had received complaints of rigging that it was investigating. (file photo)

At least three voters in southeast Bangladesh, including a journalist, told Reuters on Sunday that they were barred from entering polling booths or were told their ballot papers had already been filled in, hours after voting began in the nation's general election.

The journalist, who declined to be identified for fear of reprisals, said activists of Prime Minister Sheikh Hasina's ruling Awami League party in Chittagong, Bangladesh's second-largest city, warned him and other voters at the polling centre not to go inside.

"They said we didn't need to go inside as our votes had already been cast," the journalist told Reuters by phone, adding that there were five other voters around him at the time at the polling centre set up at the national primary school in Chittagong's Kotwali area.

"I am hearing the same thing happening at several other polling booths in Chittagong," the journalist said.

His comments add to accusations by several leaders of the country's main opposition Bangladesh Nationalist Party (BNP) who have alleged rigging and vote manipulation by the Awami League.

The Election Commission said it had received complaints of rigging that it was investigating. "Allegations are coming from across the country and those are under investigation," the agency's spokesman S.M. Asaduzzaman said. "If we get any confirmation from our own channels then measures will be taken as per rules".

At least 10 people were killed and more than a dozen injured in political clashes on Sunday by the time voting ended at 10:00 hours GMT. At least six candidates of the opposition National Unity Front alliance said they had pulled out alleging rigging.

When Rasel, a 34 year old voter in Chittagong, went down to the polling centre set up at a local polytechnic college in his area, he said about 30 people stopped him from entering the booth. He knew at least one of them was an Awami League activist, he said.

"They told me that 'voting is going on nicely, you don't need to go inside'. If you try to enter, you will be in trouble'," Rasel, who declined to give his second name fearing reprisals, told Reuters by phone. He turned back without voting.

Hasina has promised to conduct a "free and fair" election and earlier this month said in a public speech that she would not try to win the election using "unfair means." She is seeking a third straight term in power.

At a polling centre in the Umkhali south of Chittagong, a cab driver named Ali said his family had to turn back from the polling centre as ruling party workers there told them their votes had already been cast.

"I am very disappointed that there will not be a fair result in this election," he told Reuters by phone.