"My Child's Gone": Woman After 20 Shot At Party In Washington 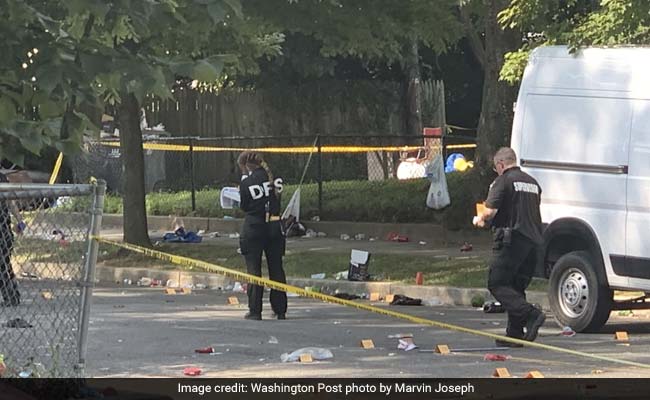 The scene in Washington, D.C., after an early-morning shooting left at least 21 wounded.

A 17-year-old was killed and an off-duty District of Columbia police officer was fighting for her life after authorities said at least 20 people were shot when a dispute broke out early Sunday at a cookout attended by hundreds of people in Washington.

The dead teenager was identified as Christopher Brown.

"I really don't understand how my child's life is just gone," said the victim's mother, Artecka Brown, 33. She said she last spoke to her son two days ago, when she hugged him and told him "I love you."

The unidentified off-duty police officer, who apparently was at the party, was critically injured and was "fighting for her life," D.C. Police Chief Peter Newsham said. Officials said the officer, who is 22 years old and has been on the force about one year, was struck in the neck.

Authorities said there was a dispute before shots were fired, and police said they believe there were exchanges of gunfire. At least 11 of the victims were women. Police initially said 21 people had been shot, but later determined that one of the injured victims had not been struck by a bullet.

Videos posted on social media show revelers partying shoulder-to-shoulder. After the shots, some victims fell while others scattered; the crime scene sprawled for blocks, with police marking 170 pieces of evidence. Police said nearly 100 bullets were fired.

The party and the tragedy that ensued revived questions about large gatherings that flout Democratic Mayor Muriel Bowser's order that prohibits groups larger than 50 people and requires those older than 2 to wear a mask when they leave home and are likely to come into contact with others. The mask requirement, one of the strictest in the nation, was toughened recently after cases began to spike.

The Bowser administration has thus far emphasized voluntary compliance over enforcement through arrests and fines, though the mayor indicated Sunday that police might now take a tougher stand.

Newsham said police had been aware of the party through an online advertisement for the event and were monitoring it. He said officers called in additional help as the crowd grew, but apparently did not intervene. He also said they did not believe they had enough officers to break up the gathering.

"I'm concerned that the event wasn't broken up," Newsham said in an interview, adding that he is reviewing the response. He said it appears officers were present when the shooting occurred.

A Wilson Building official said the administration was exploring whether to penalize the promoters of the block party, who advertised the event on Instagram. The organizers could not be reached for comment; they did not return a message left on Instagram.

Sunday's shootings came three weeks after nine people were shot in front of a restaurant in another section of the city. That shooting on the afternoon of July 19 left one of the victims dead.

Authorities on Sunday were hard-pressed to recall another time when so many people were shot in a single incident.

More than 115 people have been slain in the city this year, a 17% increase over this time in 2019, which ended the year with a decade high. Those killed include an 11-year-old boy shot at a stop-the-violence cookout on the Fourth of July and a 71-year-old shot while protecting her granddaughter.

D.C. officials have attributed some of the killings to disputes involving neighborhood crews and gangs, and between people who know each other.

Newsham blames the availability of illegal firearms and says people caught using them are not deterred by the criminal justice system. He also has said criminal suspects freed from jail because of the coronavirus pandemic are contributing to the violence.

Residents of the neighborhood said the annual block party draws people from across D.C. A flier advertised the fifth annual "34th-n-EAT" cookout, and indicated free food and drinks, with relatives of the teenage victim saying it drew an even larger crowd than in prior years.

A music artist known by his social media moniker SaintClairDMV, who attended the block party, said there were as many as 400 attendees at its peak. He said it was peaceful and people were having fun for hours.

The artist, who declined to provide his real name, said there were enough police there that it "made you think twice about being stupid."

Mari Doyle, 22, said she and her mother were returning to their home in the neighborhood when they heard gunfire. They immediately ducked and ran for cover.

"As soon as we got out the car, rounds went off," said Doyle, who lives a block away from the shooting. "All you heard was people yelling for their friends."

Brown said Christopher had a 1-year-old son and another child on the way. He was the oldest of five boys.

Relatives said he'll be remembered most for his dancing ability and signature smile.

Charisma Brown, Christopher's aunt, expressed dismay that police did not break up the event sooner. She described it as a gathering of hundreds and said it had been advertised for days.

"My son's 12. I'm scared for him to get older," she said. Noting her nephew's child and the one on the way: "They will never know how much of a beautiful soul their father has," she said.

D.C. officials said the hundreds of people at the party made it a clear violation of Bowser's orders to control the spread of the coronavirus. Violations carry fines up to $1,000.

Authorities have struggled with how to address violations of the city's coronavirus restrictions and have repeatedly declined to say specifically how police would enforce the rules.

Speaking from the scene of Sunday's shooting, Bowser indicated that law enforcement may have to be more aggressive.

"It's very important that as a community we have a zero-tolerance [policy] for this activity," Bowser said, noting that police will make some "difficult decisions" and "break up these events."

Bowser added, "And the community is going to have to understand that some people may have to go to jail.

"We know it's summertime, people have been cooped up and they don't have a lot of places to go," Bowser said. "There have been cookouts that have happened peacefully for years and years that are spinning out of control."

D.C. Council Chairman Phil Mendelson, a Democrat, said enforcing social distancing at such events presents a quandary for authorities - as well as partygoers, who should not feel like police are a hindrance.

"A block party is the ultimate community activity," he said. "But if the alternative is to prevent parties or break them up, I think that's going to backfire on police."

Mendelson said that there's no easy solution to enforcement, but that those congregating across D.C. must recognize that masks wearing and social distancing make a difference in the midst of a public health emergency.

"I don't think we want to arrest people for not wearing masks, but people need to wear masks, and I don't know how we make that happen if people are going to disobey the directive," he said.

Dexter Humphry, an Advisory Neighborhood Commission member for the area where the shooting occurred, said the people who organized the event should be held responsible.

Humphry said sending a few police officers to break up a party with hundreds of attendees "could cause a riot." He said word needs to get out to residents "that we've got to stop having these parties."

Patricia Howard-Chittams, an ANC representative for the Greenway neighborhood, said convincing people to listen is hard.

"We can only hope that people will follow the instructions given out by the mayor and the health commissioner," she said. "Unfortunately, some people in this community think they are immune."

Howard-Chittams said there are several places in and around the neighborhood where large gatherings occur, including one less than a mile from Sunday's shooting that critics on social media noted included crowds without masks, no social distancing and lots of alcohol.

"These are not new hot spots," she said. "The police have been well aware of these for years."

But, Howard-Chittams also noted recent efforts to defund police and concerns over police conduct in the wake of the death of George Floyd in Minneapolis police custody. "Unfortunately, the police have been neutered by the politicians," she said. "It's hard for the police to do what they are expected to do, and the job they want to do."