The incident unfolded Sunday at a screening area of the Miami International Airport. A report said Transportation Security Administration officers found the snake inside a piece of checked luggage when a TSA security officer noticed something odd. 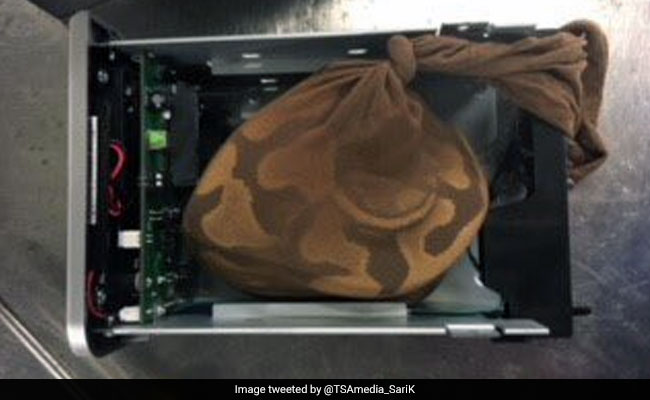 A man tried to bring a python onto a plane in Miami by hiding it inside a hard drive, according to a news report. He and the snake did not make the flight that was headed to Barbados, authorities said.

The incident unfolded Sunday at a screening area of the Miami International Airport. An article in the Miami Herald said Transportation Security Administration officers found the snake inside a piece of checked luggage when a TSA security officer noticed something odd.

Officials did not tell the Herald how big the snake was, why the man said he had the snake and what airline was involved.

Sari Koshetz, a spokeswoman for the TSA, told the newspaper that a bomb expert then examined the bag and found the python - still alive - in the hard drive.

In a Twitter message, Koshetz wrote that the snake was "artfully concealed" inside the hard drive.

"This organic mass was not explosive," she wrote, "but it shows you can't hide any threat from us."

The snake, Koshetz told the paper, was "obviously not an imminent terrorist threat." Koshetz told the Herald that the snake was a "possible wildlife threat" on a plane. Animals have gotten out on a plane and have been known to "chew through wires with fatal results," Koshetz said to the Herald.

The snake was taken into custody by the U.S. Fish and Wildlife Service, and the man was fined.

Authorities did not release the man's name.

There have been other incidents of passengers trying to get animals through airport security checkpoints.

One man strapped snakes and turtles to his body and tried to get past a security checkpoint at the Miami airport, and a woman once hid a snake in her bra at Fort Lauderdale-Hollywood International Airport, according to the Herald.

The Herald said the animals were confiscated before they made it onto a plane.