Chris Cantwell became the ivory-skinned, gun-toting star of a documentary about Charlottesville that aired Monday on HBO - and a week later is better known as the "weepy white supremacist" or "weeping Nazi" who got banned from OkCupid. 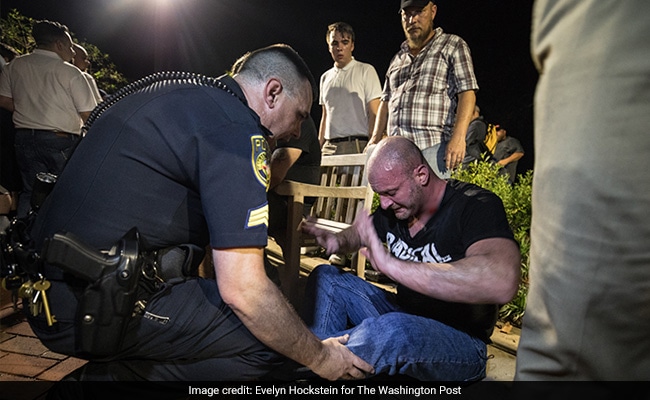 Chris Cantwell featured prominently in an HBO news program on the march in Charlottesville.

The white supremacists, nationalists and far-right trolls who starred in last weekend's violent Charlottesville, Virginia, rallies have suffered no lack of humiliation in the days since.

Take "Millennial Matt," whose catchphrase - "Hitler did nothing wrong!" - earned him tens of thousands of fans before he went to the rally, but his Twitter account has since been deleted, his real identity publicized, and he is now begging fans for money to flee his hometown because "my life is in shambles."

There are plenty of other examples, from the hot dog restaurant cook who lost his job to students whose universities publicly renounced racism after they went to the march. There's even a Twitter feed devoted to shaming the tiki-torch-lit faces of white nationalism.

But none of the marchers soared so high or crashed so hard as Chris Cantwell, who became the ivory-skinned, gun-toting star of a documentary about Charlottesville that aired Monday on HBO - and a week later is better known as the "weepy white supremacist" or "weeping Nazi" who got banned from OkCupid.

For a few triumphant hours, Cantwell was the thick-armed embodiment of white nationalism to tens of millions of people - the star of VICE News and HBO's Web documentary about last weekend's rallies, which has been seen more than 30 million times.

He looked every bit the rebel leader in that footage from Friday night and Saturday, greeting other white nationalists from as far away as Canada; marching by torchlight to the statue of Confederate Gen. Robert E. Lee; screaming "Jews will not replace us!"

"I carry a pistol. I go to the gym all the time," Cantwell tells the camera, muscles bulging beneath a shirt that advertises his blog, which in turn advertises Cantwell as a libertarian "fascist."

"I'm trying to make myself more capable of violence!" he says.

And violence there was. Men in the streets of Charlottesville wielding Confederate flags like spears. A black man beaten by white men with sticks. Heather Heyer, killed when a car rammed a crowd of counterprotesters, as 19 others were injured.

Cantwell got his licks too, as seen in the documentary.

"Communists!" he yells, pouring a jug of milk over his eyes after, he says, counterprotesters hit him with tear gas. "Second time in two f-ing days!"

"They're afraid of you. You got too big," an admirer tells him.

And then the self-avowed fascist was back on his feet and leading a march shirtless, a few cans short of a six-pack gleaming in the weekend sun.

"We'll f-ing kill these people if we have to," Cantwell says.

Cantwell's bravado only increased over the weekend, as news of the violence spread across the country.

He invited the VICE reporter to his hotel room after the marches, where he showed off his high-powered rifles and the 9mm pistolstrapped to his ankle.

The fatal car strike was justified, Cantwell insisted. The protesters had been "stupid animals."

"Someone died," the reporter reminded him.

"I think a lot more people are going to die before we're done, frankly," Cantwell said.

End film. Tens of millions of people have since watched it, and Cantwell would freshen his Facebook profile with photos of himself in the thick of the violence.

But as the weekend faded, other footage began to circulate. Cantwell had apparently recorded it during the rally, in what appeared to be the privacy of a hotel room.

And the famed white separatist appeared to be at the point of tears.

"I've been told there's a warrant out for my arrest," Cantwell pleads to the camera, through sniffles and a trembling voice. "I don't know what to do!"

There were, in fact, felony warrants out for him, the Boston Globe would later report: for the use of illegal gas, and injury by chemical or explosive. (University of Virginia police didn't immediately respond to a request for comment from The Washington Post.)

In his confessional, Cantwell told the camera he was too scared to go to the courthouse or meet police. He complained that Chelsea Manning had been threatening to "curb-stomp Nazis."

"I know we talk a lot of s- on the Internet," Cantwell said. But: "Every step of the way we've tried to do the right thing and they just won't stop. . . . Our enemies just will not stop."

It's unclear where the video was first posted, but copies quickly spread across YouTube - mocked on the political left and right alike.

"White Supremacist Cries After Realizing He Could Be Arrested," wrote Mother Jones.

And Cantwell's week would only get worse.

By midweek, Cantwell's name was as well known in the mainstream media as the fringes of the Internet.

But who was he, really?

As the Boston Globe told it, Cantwell was a former comedian from Keene, New Hampshire, who more recently moved to New York.

He is described by the Southern Poverty Law Center as "an unapologetic fascist, who spews white nationalist propaganda with a libertarian spin on his live-streamed call-in show" and seeks a whites-only state.

Or - per an OkCupid profile leaked online - he is 6 feet tall, single, and "interested in getting married and having children" with the right woman.

"Ideally I'd like to talk on here briefly, move quickly to the phone, and then we can go out on a date and see what happens," wrote the user "ItsChris603," beneath what appears to be a gym-mirror selfie of Cantwell, which ArsTechnica reported was his account.

He described himself not as a fascist, but a podcaster "specializing in controversial political satire."

"It's great because I have a very flexible schedule," he wrote. A typical Friday night would find him not, say, screaming about Jews at a white nationalist march, but rather "doing date nights. Bowling, live shows, movies, travel, all types of things."

OkCupid, remarkably, announced in a tweet that Cantwell did have an account, and had just been banned for life.

A statement on the decision to ban Christopher Cantwell by OkCupid CEO @elieseidhttps://t.co/w5Ie7S7aRn

Tinder booted him too, Cantwell confirmed in a slur-filled blog post Thursday, explaining that "these [Jews] will stop at nothing."

So there it is. The man who was an HBO-famous swaggering racist Monday had been reduced by the end of the week to broadcasting from an undisclosed location via a Tumblr account and his personal blog.

Promoted
Listen to the latest songs, only on JioSaavn.com
Cantwell had hired a lawyer, he wrote Thursday, and was preparing to turn himself in to police.

"Depending on who you listen to, I'm either a hero, a terrorist, or a crybaby, " he wrote, "which should tell you something about the reliability of the media."

Indian Worker In Singapore Dies After Getting Crushed In A Crane: Report