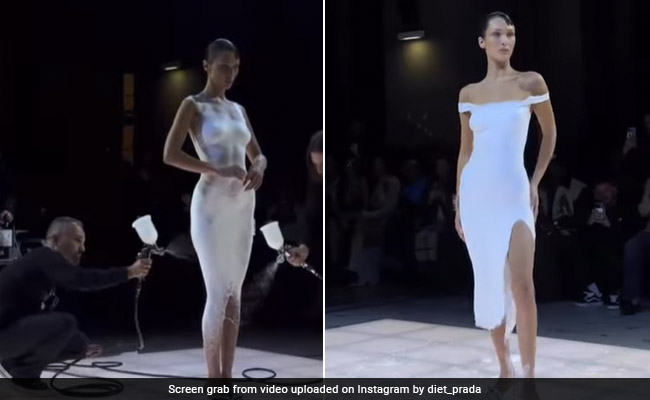 Ms Hadid can be seen in a Coperni slip dress spray-painted over her body for the show's big finale.

Bella Hadid, a supermodel, walked the Coperni Womenswear Spring/Summer 2023 runway wearing a spray-on outfit that was practically manufactured just for her on Friday's Paris Fashion Week catwalk.
Several videos and images have surfaced on the internet post-show. A video has been posted by an official Instagram page named Diet Prada on Saturday. "Bella Hadid x some McQueen fashion nostalgia at Coperni Spring 2023. What a moment," reads the caption.

The now viral video shows Ms Hadid entering the runway, initially topless and covering her breasts with her hands. She was only wearing a pair of nude thongs and slip-on high heels, and her hair was pulled back in a sleek updo.

The well-known model can further be seen getting spray painted on her body by two artists in the video and getting a futuristic Coperni slip dress spray-painted over her body for the show's big finale. The model was standing steady and adjusting her arms when they deliberately sprayed a thick layer of opaque white latex all over her body.

Later, a solid, mid-length dress with a thigh-high slit and off-the-shoulder sleeves came into being and was gracefully draped before Ms. Hadid left the stage to conclude the fashion show.

Within just a few hours of being shared, the video has amassed over 3.2 million views, more than 2.4 lakh likes, and is still counting. Fans went crazy seeing her on the show and left numerous remarks in the comment section of the post.

One user said, "Why did I think this was just some body paint and then all of a sudden it's a whole damn dress! What in tarnation!!"

"This is actually the coolest thing we've ever seen," commented a second user.

According to Page Six, Coperni is renowned for its bold fashion choices; Kylie Jenner and Doja Cat both wore the hand-blown glass handbag that made the company famous in April.

2 Students Killed, Teacher Injured In Shooting At US School